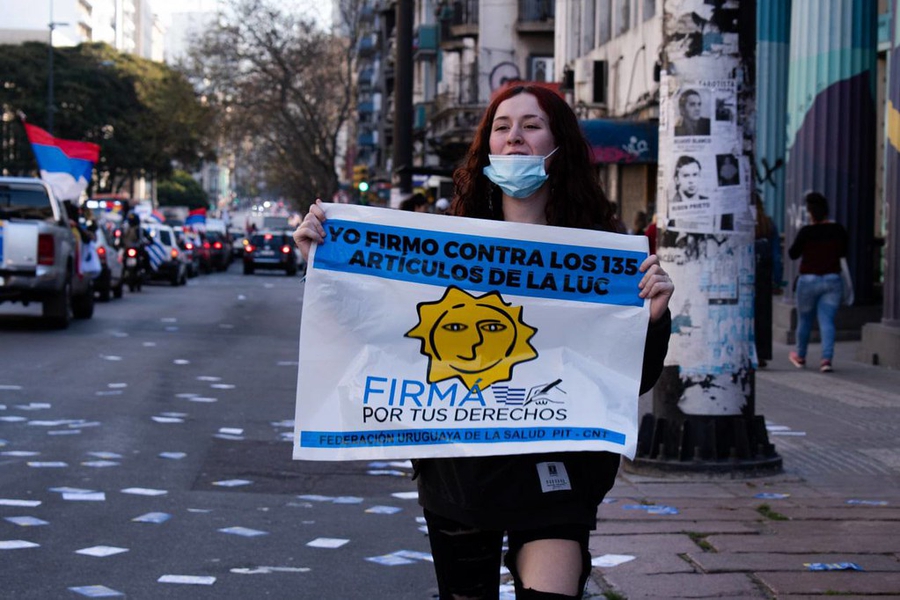 On 10th December 2021, unionised transportation workers demonstrated in front of the Tres Cruces Bus Terminal in Montevideo, demanding better pay and working conditions amid salary negotiations. The demonstration was organised by the Unión Nacional de Obreros y Trabajadores del Transporte (National Union of Transport Workers - UNOTT). The police repressed the protest, firing rubber bullets and injuring at least one worker who was hit multiple times in the leg. Police said they had orders to intervene if protesters blocked transit at the terminal. UNOTT member José Duarte countered this version, saying workers were marching around the area when police asked protest leaders to let a bus through. However, Duarte said that before they could mobilise over a hundred protesters to give the bus passage, an altercation began between an officer and a worker, and the police began intervening.

On 23rd December 2021, the police disrupted another demonstration by unionised workers in front of the port of Montevideo who were demanding better working conditions. During the police intervention, workers were handcuffed, dragged on the ground and allegedly beaten by the police. The protest repression was again justified by saying the protesters had impeded entry and exit from the port. Union Sindicato Único del Transporte de Cargas y Ramas Afines (Single Union of Freight Transportation and Related Branches - Sutcra) disputed this claim, saying there are three entrances to the port and the protest only blocked one of them.

Trade union centre PIT-CNT expressed concern about what it considered excessive force and repression by police. The disruption of both demonstrations was based on the Law of Urgent Consideration (LUC), which enables the police to intervene in protests that restrict transit. PIT-CNT leaders said they are concerned that the LUC undermines workers’ rights to mobilise for labour demands. As previously reported by the CIVICUS Monitor, unions and civil society in Uruguay have campaigned against the LUC and gathered signatures to call for a referendum to repeal several of its articles. This will take place on 27th March 2022.

In a separate incident, the mayor of the Punta del Este department threatened to prohibit a demonstration by the banking workers union Asociación de Bancarios del Uruguay (AEBU), raising the possibility that police would be deployed to stop the demonstration. However, the protest was carried out without police intervention on 25th February 2022.

On 1st February 2022, radio station Azul FM aired audio recordings of a group rape which is under investigation. Radio host Ignacio Álvarez, who aired the audio during his programme “La pecera,” held that the recording was newsworthy because it raised doubt on the assault allegations. Press union Asociación de la Prensa Uruguaya (Uruguayan Press Association - APU) issued a statement recalling the need to respect victims in the journalistic coverage of incidents of sexual assault, given the sensitivity of these cases.

Uruguay’s legislation on violence against women (Law 19.580, Article 92) prohibits the dissemination of recordings “with intimate or sexual content” without authorisation. The incident led prosecutors to investigate the recording’s origin, including by sending a police officer and a prosecutor to confiscate evidence from the Azul FM headquarters in Montevideo on 4th February 2022. A raid on Álvarez’s house was also ordered but not carried out.

The Inter American Press Association (IAPA) expressed concern about the station’s raid and seizure of material, saying it was a disproportionate measure that disregarded principles of press freedom. Carlos Jornet, chairman of IAPA’s Committee on Freedom of the Press and Information, said:

On 19th November 2021, digital media Sudestada reported that it had been notified of the removal of two of its articles from Google’s search results. The outlet said Google did not give them an opportunity for prior defence, appeal and due process. The two articles regarded alleged money laundering cases exposed in documents leaked in the Pandora Papers. According to Sudestada, Google unilaterally decided to remove the publications based on a complaint claiming they had violated the United States’ Digital Millennium Copyright Act (DMCA) and the European privacy framework.

Sudestada filed an amparo claim with the Uruguayan courts, with the support of civil society group Observacom. 26 civil society organisations signed a statement in support of Sudestada, saying that it is inadmissible for complaints mechanisms to be abused in order to silence public interest information. They said platforms such as Google should provide effective and quick mechanisms for the appeal and review of decisions on alleged content policy violations.

Google representatives were summoned to clarify the case before Uruguayan courts and, hours before the hearing on 24th November 2021, the technology company restored the indexation of one of the publications. On 21st December 2021, the Civil Court of Appeals of 7th Turn declared that Uruguayan courts do not have jurisdiction to decide on the case, and that plaintiffs should look for relief in European courts. The Court also considered that the content was not removed from the internet globally but only de-indexed by one search engine in a specific region, concluding that this did not entail a restriction to freedom of expression or press.

On 2nd December 2021, Graciela Bianchi, a Senator with the National Party, said on her Twitter account that she had requested information from national education authorities on a teacher’s record. The request was made after the teacher, who is also a union leader, came into the spotlight for her criticism of the situation of the country’s education system during an event with President Luis Lacalle Pou on 29th November 2021.

Bianchi’s attitude was condemned by opposition coalition Frente Amplio and by the Coordinadora de Sindicatos de la Enseñanza de Uruguay (Uruguay’s Education Unions Coordinator - CSEU). In a statement, the education union said this was “another example of the anti-union and political persecution of unionised militants and anyone who expresses their disagreement with the government.”