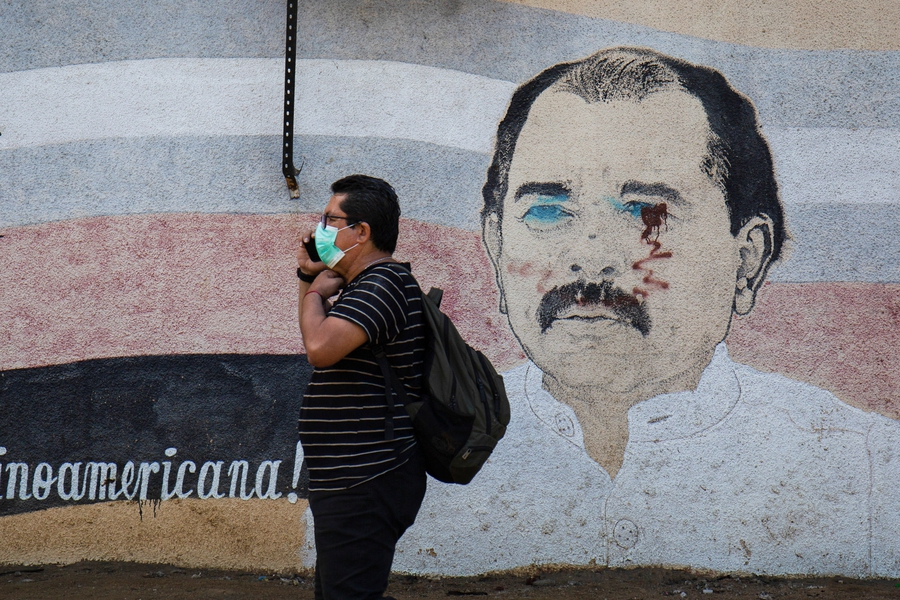 A man walks past a mural showing Daniel Ortega ahead of his 4th inauguration. 7 January 2022, REUTERS/Maynor Valenzuela.

On 14th December 2021, nine civil society organisations had their legal personalities cancelled by decree. The organisations were accused of taking part in financial irregularities and money laundering. Thee Association of INCAE Graduates was one of the groups that had their legal status cancelled, in alleged retaliation after the 2021 class of graduates chose to dedicate their graduation ceremony to political prisoner and professor Arturo Cruz. Authorities also cancelled the legal status of university Hispanoamericana, leading to uncertainty among the student community.

Civil society group “Nicaragua Nunca Más” (“Never Again Nicaragua”) reported that there were at least 167 political prisoners under detention in Nicaragua in December 2021. Gonzalo Carrión, a spokesperson for the group, also said that they had information of 115 cases of torture or ill-treatment of political detainees in 2021.

Similarly, in December 2021 the feminist human rights network IM-Defensoras denounced the torture and ill-treatment of women political prisoners in Nicaragua. According to the group, activists Ana Margarita Vijil, Dora María Téllez, Suyen Barahona and Tamara Dávila have experienced torture and degrading and inhuman treatment. They have all been detained for over six months and in that period they have faced restrictions on family visits, isolation, constant interrogations, food deprivation and lack of medical care, among other rights violations. IM-Defensoras claimed 66-year-old Dora María Téllez was detained in the men’s pavilion, which would make her situation particularly delicate.

On 3rd January 2021, the Alianza Universitaria Nicaragüense (Nicaraguan University Alliance - AUN) called on the government to authorise an assessment by the International Committee of the Red Cross (ICRC) of the state of health of all political prisoners. AUN expressed concern about the health situation of opposition leader and AUN leader Lesther Alemán. According to the organisation, Alemán has felt acute pain in his right leg and although he has had treatment for the pain, there has been no diagnosis of the condition. AUN also demands COVID-19 vaccination for political prisoners, permission for weekly visits and an end to the use of repeated interrogations as a form of torture.

Relatives of Felix Madariaga and Medardo Mairena have also denounced that both political prisoners have lost more than 20kg in weight since their detention.

On 8th December 2021, the Inter-American Commission on Human Rights (IACHR) issued Resolution 101/21, which granted precautionary measures in favour of María Lilly Delgado Talavera. The international organisation found that, because of her journalistic work in Nicaragua, the reporter has faced harassment, intimidation and surveillance that put her at urgent risk.

Six journalists were imprisoned in Latin America as of December 1, 2021: three in Cuba, two in Nicaragua, and one in Brazil.

While a relatively low number, CPJ has found a disturbing decline in press freedom in the region.

On 9th December 2021, the Committee to Protect Journalists (CPJ) published a special report about the unfolding “press freedom crisis” in Latin America. The report said repression intensified in Nicaragua in 2021, with authorities harassing and detaining journalists and opposition candidates, banning civil society organisations and making quick use of new laws criminalising critical expression and punishing outlets receiving foreign funding ahead of the presidential election.

CPJ highlighted the cases of sports journalist and political commentator Miguel Mendoza, and Juan Lorenzo Holmann, the publisher of the national daily newspaper La Prensa, who have spent months in pre-trial detention at Managua’s notorious El Chipote prison. Both have been denied access to their lawyers and family members. CPJ said the criminal cases against Mendoza and Holmann are some of the most extreme examples of Nicaraguan authorities’ ongoing strategy to use the judicial system to intimidate and punish critical media voices.

A separate analysis, published in early December 2021 by Nicaragua Nunca Más, said that Nicaraguan journalism experienced a fierce attack in 2021. The group documented illegal arrests, trials, physical assaults and smear campaigns against journalists. Other common tactics of repression included threats of investigation, abusive application of the Cybercrime Law, intensive and repeated interrogations, arbitrary deprivation of liberty and fabrication of incriminating judicial records. According to Nicaragua Nunca Másand Periodistas y Comunicadores Independientes de Nicaragua (Independent Journalists and Communicators of Nicaragua - PCIN), there are more than 100 journalists from Nicaragua in exile since 2018.

Newspaper La Prensa, through journalistic collective Voces del Sur, reported in January 2022 that there were 702 incidents of attacks and restrictions on independent journalism in Nicaragua in 2021. This figure is nearly double that of 2020, when 360 such incidents were recorded. There were 171 persons affected by these incidents, of which 67% are men and 37% are women. Most cases (302) referred to abuses of State power and 291 involved attacks. There were also 52 judicial proceedings, 19 restrictions of information access, 18 instances of stigmatisation and 16 arbitrary detentions.