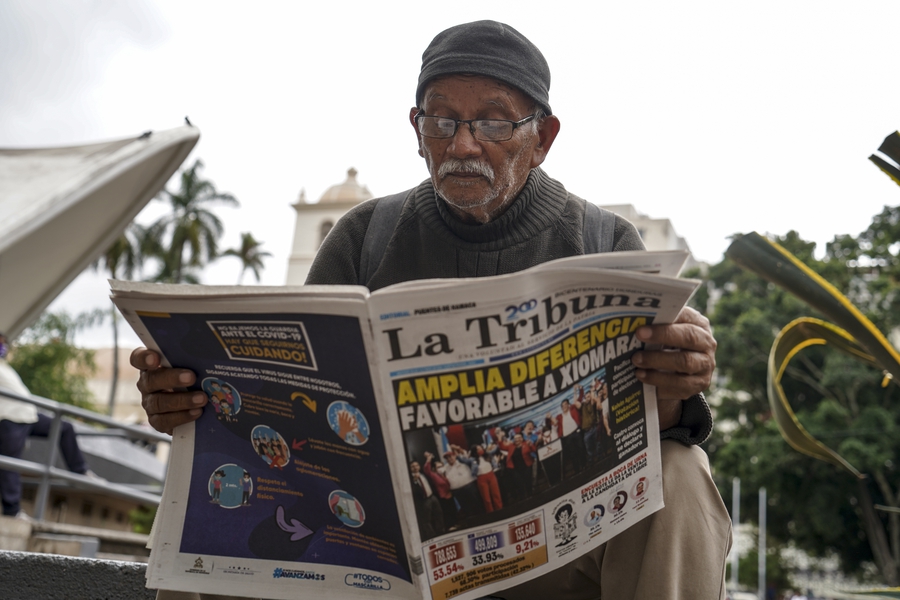 On 28th November 2021, people in Honduras headed to the polls to vote in presidential elections. Xiomara Castro of the opposition party Libre surged ahead in the early results, leading ruling party candidate Nasry Asfura to concede defeat on 1st December 2021 before the count was concluded. Official results published by the National Election Council later showed Castro won 51,12% of the votes, while Asfura had 36,93%.

Castro, who was the country’s first lady during Manuel Zelaya’s government, will be the Honduras’ first woman president. She will replace Juan Orlando Hernández of the National Party, which has been in power for twelve years. Xiomara Castro’s inauguration is scheduled to take place on 27th January 2022.

Trans human rights defender Thalía Rodríguez was murdered in her house in Tegucigalpa on 10th January 2022. According to Reportar Sin Miedo, two assailants entered her home and shot her multiple times. There were other people in the house with Rodríguez and at least one other person was injured but survived the attack. Rodríguez was an activist who dedicated over twenty years to the defence of LGBTQIA+ rights and the rights of persons living with HIV. She was a member of Red Lésbica Cattrachas and participated in several activist groups. In an interview, Rodríguez had said she was one of the few Honduran trans activists of her generation still alive. She said:

“The day you're gone they’re going to talk about you because you left a legacy. And that's one of the most beautiful things we all seek in this life.”

. @PBIHonduras is accompanying the trial of the criminalized Guapinol River protectors. This trial has seen delays, irregularities, and has proceeded without live transmission adding to concerns about transparency and due process. More at https://t.co/l2VdoYWWRO #PBIaccompanies pic.twitter.com/dvzRFdTIRU

After more than two years in pre-trial detention, the trial of eight members of the Comité Municipal de Defensa de los Bienes Comunes y Públicos (Committee for the Defence of Common and Public Assets - CMDBCP) began in December 2021. The group is known as the Guapinol water defenders, for acting to protect water sources and natural resources of communities in danger of mining-related contamination. Civil society organisations warned of procedural irregularities and abuses, including the inclusion of a new charge in the final stages of the judicial process. Families and supporters of activists also faced harassment in the days leading up to the trial, while online smear campaigns and threats against the defenders increased.

The trial was suspended on 11th December 2021 when the legal defence filed a writ of recusal against the presiding court, but the challenge was dismissed by the Court of Appeals of La Ceiba in early January 2022. On 14th December 2021, police officers denied entry to the Supreme Court to supporters who were joining the presentation of a habeas corpus application for the Guapinol activists detained. They were able to join the session following pressure from others who were already inside the court. Officers also reportedly took photographs of several defenders who were documenting the incident.

In December 2021 and January 2022, healthcare workers organised a series of protests for labour rights in Honduras. Many of the demonstrators were suspended from their jobs after their temporary contracts expired, and they demanded permanent employment and the payment of salaries that had been delayed. According to news reports, over a thousand healthcare workers’ contracts expired at the end of December 2021 and about 3,000 were in danger of losing their jobs by the end of January 2022. A protester said that the government promised jobs for those who worked in the frontline against the pandemic but had not delivered on that commitment. Demonstrators also argued that it was irresponsible to fire health personnel amid a resurgence of COVID-19 cases in the country.

On 9th January 2022, Indigenous communicator and leader Pablo Isabel Hernández Rivera was shot and killed while walking to church in the community of Tierra Colorada, San Marcos de Caiquín municipality in the Lempira department. Hernández Rivera was the director of community radio Tenán, “The Indigenous Lenca Voice”, and was also a leader in several Indigenous organisations. The Inter-American Commission on Human Rights said the communicator had previously received threats and been targeted by a smear campaign, and that the community radio station had also faced closure threats and sabotage. As reported by Article 19, Rivera’s brother had recently been threatened with a firearm by a person linked to mayor Efraín Guadalupe Muñoz during a public hearing in which the journalist also participated.

In a report on freedom of expression in the Americas, Honduras was highlighted as the most dangerous country in Central America for journalists. According to Fundamedios’ annual report, published on 5th January 2022, four journalists were murdered in Honduras between 2020 and 2021: Germán Vallecillo, Jorge Posas, Luis Almendares and Pedro Canelas. The organisation said Juan Orlando Hernández’s government adopted a passive attitude toward the attacks on reporters. Fundamedios also underscored the new Criminal Code’s provisions on defamation and libel, which under human rights standards should be treated as civil offences. The report also addresses attacks on communicators and news outlets, including a cyberattack in October 2021 which resulted in the loss of information published for over a year on digital media En Altavoz.