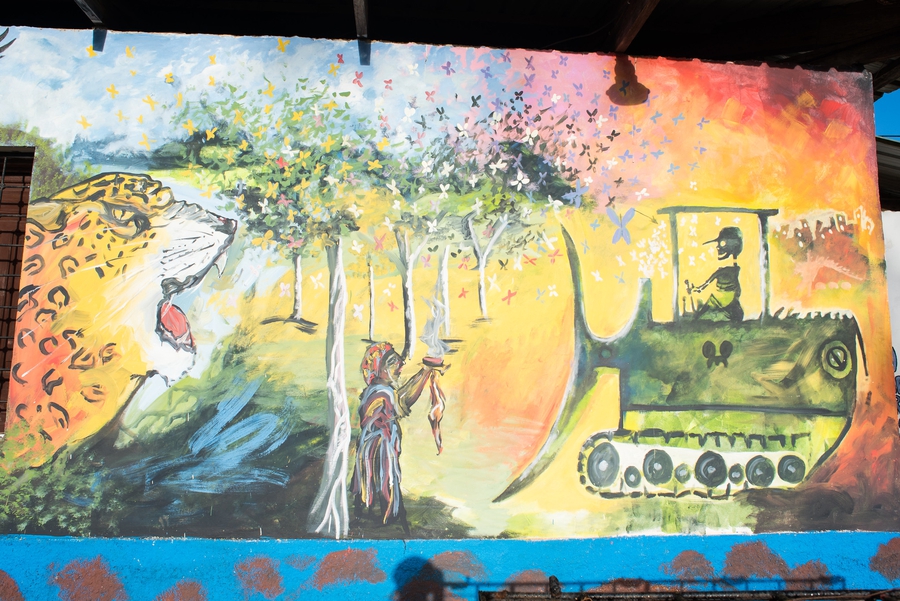 Mural at the Utopia centre of COPINH, threatened with arson in smear campaign. Photo by Garry Walsh (CC BY 2.0).

On 25th June 2020, Honduras’ new Criminal Code entered into force despite warnings from civil society that some of its provisions threaten freedoms of expression and peaceful assembly. As previously reported on the Monitor, human rights organisations have said that the code enables criminalisation of protests. In addition, the approved legislation removed criminal sanctions for defamation but maintained them for slander and insult. On this, Natalie Southwick, Central and South Americas Programme Coordinator for the Committee for the Protection of Journalists (CPJ) stated:

“We are disappointed that Honduras has squandered an opportunity to join the growing regional consensus that civil remedies provide adequate redress for cases of insult and slander, and to stop criminalising journalism.”

On 19th June 2020, Garífuna defender Antonio Bernárdez Suazo was found dead with bullet wounds and signs of torture. The 71-year-old was a leader of the Punta Piedra community, Colón department, and had been missing for six days. Because of continuous violence from land invaders, the Garífuna community of Punta Piedra was granted precautionary measures by the Inter-American Commission for Human Rights in 2015 but the Organización Fraternal Negra Hondureña (OFRANEH) said this decision has been ignored by Honduras’ government. Antonio Bernárdez was a relative of another defender of the same community, Felix Ordoñez Suazo, who was killed in 2007.

On 22nd June 2020, members of Indigenous council Consejo Cívico de Organizaciones Populares e Indígenas de Honduras (COPINH) denounced that their organisation was subjected to a defamation campaign in Santa Catarina, Intibucá department. As reported by the organisation, residents of the municipality circulated a message discrediting COPINH and threatening to set fire to their local centre. This smear campaign was conducted after COPINH announced it would make their centre available for social isolation of persons deprived of freedom who presented COVID-19 symptoms. COPINH coordinator Berta Zuñiga Cáceres was also specifically named in the message, which is particularly concerning given the history of threats, assaults and eventual killing of her mother, Berta Cáceres.

On 26th May 2020, a webinar organised by Somos Muchas about the criminalisation of abortion in Honduras was interrupted by a cyberattack. About 140 people were attending the event when a group entered the online platform and began flooding the chat with misogynistic, sexist and racist messages. The hosting account was hacked and the attackers took over the presentation screen, drawing swastikas and other images, and sharing videos of men showing their genitals. The webinar was temporarily suspended. According to IM-Defensoras, it is not the first time Somos Muchas and their spokeswomen have been subjected to cyberattacks linked to their feminist activism and the defence of sexual and reproductive rights.

Defenders in the pandemic

On 23rd June 2020, over 30 civil society organisations in the coalition Foro Internacional por los Derechos Humanos en Honduras called on the government to ensure the security of human rights defenders in the context of the pandemic. Local organisations have stated that current emergency measures, such as curfews or movement restrictions, have increased risks of persecution, surveillance and criminalisation for defenders. National organisations COPINH and OFRANEH also reported constant harassment from law enforcement against Indigenous women. The coalition called on the government to recognise the important monitoring conducted by defenders, and to provide safeguards so that they can continue this work during the health crisis.

On 2nd July 2020, two media professionals of TV station Canal 45 were shot and killed in La Ceiba, Atlántida department. Television host and producer German Vallecillo Jr. and cameraman Jorge Posas were driving to the station when two individuals shot them and fled. The two communicators had been at Vallecillo Jr.’s house to celebrate his birthday. A spokesperson for the National Police told CPJ that investigators were considering various motives for the attack, including Vallecillo and Posas’ journalistic work. Newspaper La Prensa reported that five suspects were initially arrested on 4th July 2020 and one of them, Ramón David Zelaya Hernández, was held after being identified by an eye witness.

The Committee for Free Expression (C-Libre) recorded 41 attacks linked to the exercise of freedom of expression between 16th March and 11th June 2020. The organisation’s analysis highlights the suspension of several articles of the Constitution during the state of emergency, including guarantees related to freedom of expression, as previously reported on the Monitor. In this period, journalists have denounced the detention of media workers when going to their places of work and said that circulation permits were used as a tool to restrict journalism. Additionally, there have been cases of public vilification of the press and defamation campaigns. In this context, online news outlet Criterio.hn stated that two of their journalists had faced harassment and intimidation.