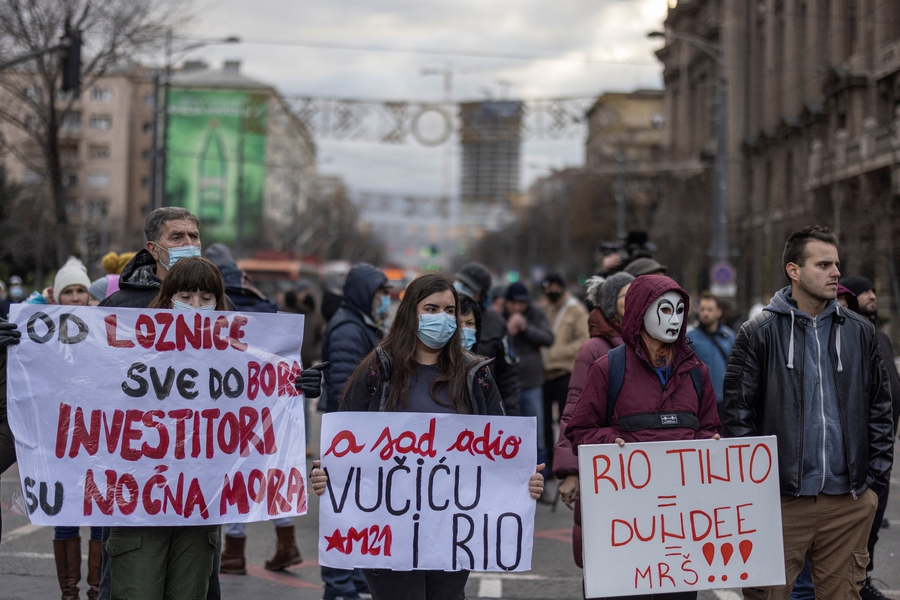 Several organisations have received threats for calling for the removal of a mural of convicted war criminal Ratko Mladic and for supporting civic activists Aida Corović and Jelena Jacimovic who threw eggs at the mural in protest. Corović was briefly detainedand may face misdemeanour charges of disturbing public order.

After speaking out in support of the activists, graffiti was sprayed on the premises of the Initiative for Požega with the threat: "We are waiting for you". The premises of the Pride Info Centre was also vandalised with a graffiti glorifying war criminal Ratko Mladic. Additionally, on two separate occasions the grounds of the Youth Initiative for Human Rights (YIHR) in Belgrade were painted with the message "Ratko Mladić, a Serbian hero". According to YIHR the attacks have been ongoing for months. Activists of the Čuvari/ke vatre group were threatened on Facebook with photos of group members photographed during protests or from private profiles sent to their inboxes after expressing support for Corović and Jacimovic. The Regional Academy for Democracy Development was also intimidated, after officially supporting the removal of the mural, while their president, Balsa Bozovic received hundreds of death threats after a TV debate with Ratko Mladic's lawyer, Branko Lukic. In a statement the organisation said:

“The Regional Academy for the Development of Democracy calls on the competent authorities to react urgently, detect and sanction the perpetrators. Serbia must not send the message again that glorifying war criminals is an official policy, and the protection of perpetrators and those who threaten death is desirable, acceptable and permissible behaviour.”

Djordjo Zujovic, an official of the Social Democratic Party of Serbia, decided to leave Belgrade due to threats against him and his family following his support for the removal of the Mladic mural. Actor and member of the Presidency of the Movement of Free Citizens, Sergej Trifunović, also received death threats after publicly opposing the mural.

Separately, the Women's Association of the Kolubara District (ŽUKO) received death threats for organising a dinner for refugee children on 31st October 2021.

In another incident, several lawyers speaking at protests against a law introducing additional tax burdens for legal practitioners were questioned by police. Lawyers who criticised judicial practices in a private Viber chat group were interrogated as well.

Relating to these concerning restrictions on CSOs, on 16th December 2021, the European Parliament adopted a resolution on human rights, democracy and the rule of law in Serbia stating “that the work of CSOs and NGOs takes place in an environment that is not open to criticism […], and calls on the Serbian authorities to counter the shrinking of the space for civil society and independent media and ensure that they can work free from all restrictions, including intimidation or criminalisation of these organisations and urges the authorities to foster an atmosphere that is conducive to the work of all CSOs”.

After the “Mural must fall” protest held in November 2021 in Belgrade, a banner by the organisation Women in Black stating "We will never forget the genocide in Srebrenica" was stolen and publicly burned. The attackers are linked to a right-wing group and posted video material of the incident on social media. In addition, the entrance to the Women in Black office in Belgrade was once again vandalised with insulting graffiti (see previous update for earlier incident). The group deemed the attack to be part of the organised and continuous intimidation it is facing.

Additionally, on 9th November 2021, a planned protest by Youth for Human Rights (YIHR) in front of the Mladic mural was banned by the Ministry of Internal Affairs. On the day of the originally scheduled protest, members of the Ministry “identified” citizens who found themselves in the immediate vicinity of the mural.

Following continuous pressure from civil society and weeks of demonstrations across Serbia during November and December 2021, President Aleksandar Vučić halted a controversial lithium mining project with British-Australian company Rio Tinto.Protests staged, which are considered the largest since Vučić came to power, blocked major highways, roads and bridges in more than 50 locations in Serbia, demanding amendments to the Referendum Act and the repeal of the Expropriation Act, which would facilitate expropriation of land needed for the extraction of lithium in western Serbia. On 8th December 2021, the Serbian government announced the withdrawal of the law from parliament and amendments to the Referendum Act in light of the Council of Europe’s Venice Commission’s opinion. Despite demands of protesters being met, 40 civic groups announced that protests will continue until the lithium mine project is completely scrapped.

During protests, several activists reported being intimidated and were warned by the police of the “risks” for attending gatherings prior to protests taking place.

During protests, which blocked roads throughout Serbia, several incidents occurred, including violations against journalists:

Members of the Independent Journalists’ Association of Vojvodina and associates of the Pancevo SiTi portal received misdemeanor fines for attending a protest blocking a road. In a reaction, the activists questioned where the police had gathered the information for issuing the misdemeanour fines (name, address, ID number), as at no time their personal information has been registered by the police.

Several incidents against journalists have been documented, from obstruction on reporting to intimidation and harassment:

Furthermore, the Radio Television of Serbia banned the "Kreni-Promeni" campaign which raises awareness of the exploitation of Lithium by the company Rio Tinto.

In a positive development, the Ministry of Internal Affairs announced that it would drop the misdemeanor procedure against the editor of the Smederevo portal and a member of the Association of Journalists of Serbia, Željko Milojevic, as a result of their reporting on a blockade in Smederevo.