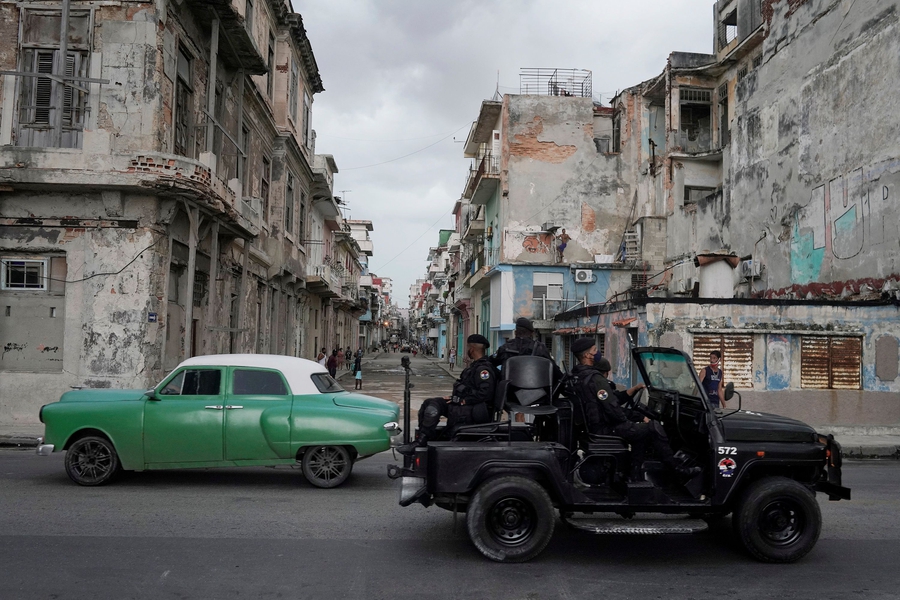 In September 2021, activist group Archipiélago announced they would organise a peaceful “Marcha Cívica por el Cambio” (“Civic March for Change”) in Havana, initially scheduled for 20th November 2021. Their call for protest demanded respect for people’s rights, the release of political prisoners and the adoption of democratic solution mechanisms. Groups in Santa Clara, Holguín and other cities began to express their support and notified local authorities of their intention to organise local marches on the same day as a part of the movement.

After the civic march was announced, Cuba’s government scheduled nationwide military exercises between 18th and 20th November. Archipiélago denounced that several people who signed the permission requests for the protests had faced intimidation and harassment. When the protest organisers decided to reschedule the march for 15th November 2021, Cuban authorities finally denied permission for the protest, saying they did not “recognise legitimacy in the reasons given for the march.” They also claimed expressions of support from abroad showed that the protest meant to destabilise order, making it illegal.

“We are facing a flagrant violation of human rights. Formally, although in a climate of threats, arbitrary arrests and detentions in the homes of the organisers, the Cuban government once again closes the doors to citizen participation by criminalising the exercise of a right.”

Despite the denial of permission, the protest organisers said they still intended to march peacefully in November. On 21st October 2021, Cuban prosecutors summoned protest leaders and warned them against convening the rallies.

Report on repression of July protests

In July, Cuba saw the largest protest movement across the country since the Cuban Revolution in 1959.

What happened to the people demonstrating in the streets for human rights?

A new @HRW report based on 150+ interviews reveals a pattern of abuse: https://t.co/IavJfZJJt1 pic.twitter.com/Lb5CusYNJq

On 19th October 2021, Human Rights Watch (HRW) published a new report detailing the repression of nationwide protests on 11th July 2021. The organisation said the protests were overwhelmingly peaceful and yet the government responded with systematic arbitrary detention and abuse-ridden criminal prosecutions of those who joined the demonstrations. The brutal repression included gender-based violence and ill-treatment of protesters detained, and the violation of their due process guarantees. HRW’s analysis showed consistent and repeated patterns of abuses by varied security forces, in multiple locations across Cuba.

In August, Cuban authorities said that 67 people had been tried in connection with the protests, of which only one was acquitted. According to HRW’s report, in most cases peaceful protesters were sentenced to between 10 months and a year in prison, though a few were sentenced to house arrest after their appeal or were released after paying a fine. They said hundreds remain in prison or under house arrest, including some children under the age of 18.

On 23rd August 2021, State security agents threatened the mother of Cubalex director Laritza Diversent for the human rights advocacy work by the organisation. Diversent’s mother was told she could be prosecuted for the work conducted by her daughter, who lives in exile. The agents also reportedly threatened to kidnap Diversent abroad and have her prosecuted in Cuba.

At the end of September 2021, the Comisión Cubana de Defensa Electoral (Cuban Commission of Electoral Defence - COCUDE) reported that Cuban authorities have repressed and harassed people who expressed support for the protest march “Marcha Cívica por el Cambio”. Yunior García Aguilera, one of the demonstration’s organisers, was vilified by government-sponsored news media. One of the organisers in the city of Holguín was accused of “contempt” and detained for two days. At least three activists who expressed support for the march were reportedly detained by police, who warned them that the protest would not be allowed and threatened them with arrest and physical violence.

On 12th October 2021, State security forces threatened María Elena Mir Marrero, a prominent pro-democracy activist. Security police officers confronted her in her home and threatened to take legal action if she did not agree to stop her activism. She was then placed under house arrest and told she would be jailed if she left her home. The activist has been arrested dozens of times and was granted precautionary measures by the Inter-American Commission on Human Rights (IACHR) for the constant harassment she faces from Cuban authorities.

HRD released and forced into exile

On 25th September 2021, artist Hamlet Lavastida was exiled. Lavastida, who had been under arrest since June 2021, and his partner Katherine Bisquet left for Poland after authorities decided to release him under the condition that he and Bisquet left the country. After their arrival in Europe, Bisquet, who is a writer and poet, published an account of the harassment she endured. She said: “The political police imposed exile on both of us as the only option for Hamlet's release. Since the beginning of his unusual detention, and during the 90 days he was deprived of his liberty under an unfounded investigation process, I, Katherine Bisquet, writer and activist, have been the target of harassment, coercion, illegal deprivation of liberty (house arrest for 65 days), psychological torture, illegal detentions and threats of prosecution by the State Security.”

Amid President Miguel Díaz-Canel’s visit to Mexico in September 2021, civil society organisation Article 19 released a statement on the repression of freedom of expression and the press in Cuba. The organisation said that in the context of the 11th July 2021 protests they had recorded 20 attacks by security forces against communicators. One attack targeted a media outlet, while the rest targeted journalists – 12 men and 7 women.

Article 19 said there was a pattern to the detention of journalists around the July protests: reporters were taken to detention centres without legal assistance and their relatives were not informed of their whereabouts, so that for several days they remained in a situation of enforced disappearance. In several cases, those detained were only informed of charges against them shortly before the end of the trial – often they were accused of “public disorder” and related crimes. In at least two cases, authorities used coronavirus regulations to issue fines for “spreading an epidemic”. Many journalists also reported facing police surveillance and harassment.