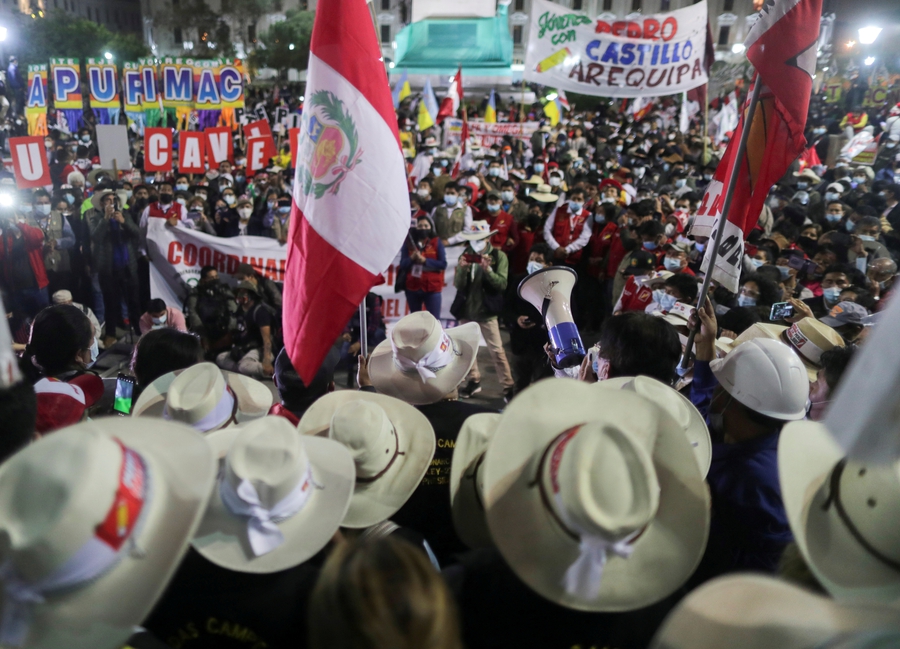 On 28th July 2021, Pedro Castillo of left-wing party Peru Libre was sworn in as president of Peru following six weeks of uncertainty around the country’s elections. Castillo won 50.2% of the vote in a deeply polarised run-off held on 7th June 2021, with a lead of about 44,000 votes over conservative candidate Keiko Fujimori of Fuerza Popular.

While international observers said the election took place without serious irregularities and called the process “a model of democracy”, claims of electoral fraud made by Fujimori led to a lengthy review of the results. It was only on 20th July 2021 that the country’s electoral authorities officially declared Castillo president-elect, dismissing Fujimori’s attempt to annul thousands of votes.

Pedro Castillo is a former school teacher and union leader who gained prominence as a social leader in the 2017 teacher strike, reported by the CIVICUS Monitor at the time. Hundreds of his supporters from various regions had camped out for more than a month in front of the electoral court in Lima to await the official election results. In his first address as president-elect, Castillo called for unity, saying “I ask for effort and sacrifice in the struggle to make this a just and sovereign country.”

On 26th June 2021, the Asháninka leader and environmental defender Mario López Huanca was shot in the head while walking through a sector of his community, Shirarine, Puerto Bermudez district, in Oxapampa. He died five days later from the injury. López was the secretary of Indigenous organisation Ecosira, which comprises 69 Indigenous communities and co-manages the El Sira Communal Reserve.

The case is still under investigation, but news outlet OjoPúblico reported that residents of Shirarine believe the perpetrators were criminal groups involved in narcotrafficking and illegal logging, who have threatened the reserve for years. According to López Huanca’s sister, the defender had received threats before. Civil society coalition Coordinadora Nacional de Derechos Humanos (National Human Rights Coordination) warned that the State is not protecting the defenders of the El Sira Communal Reserve. As previously reported by the Monitor, in 2019 two leaders of the Nueva Austria del Sira Community were violently attacked.

In a positive development, at the end of July 2021, the Kakataibo peoples won a major victory: after years of campaigning, a long-awaited reserve to protect the lands of uncontacted Kakataibo peoples was created in the Peruvian Amazon. Indigenous organisations had requested the establishment of the reserve in 1993, aiming to protect the territory from land invaders and illegal loggers. However, in the same period, the Kakataibo’s federation also denounced resolutions by the Huánuco Regional Government that undermine the land rights of Kakataibo Indigenous communities in Huánuco and Ucayali.

In June and July 2021, Peru saw repeated demonstrations by supporters of presidential hopefuls Pedro Castillo and Keiko Fujimori as the country awaited the official election results, delayed by claims of electoral fraud.

Following the run-off, thousands of Castillo supporters travelled to Lima, often from remote rural areas. Fujimori voters also rallied in the thousands, supporting her claims that the election had been stolen. News outlets reported tension in the capital city as rival protests took place on 20th June 2021.

On 31st May 2021, Indigenous women of the Organización Nacional de Mujeres Indígenas Andinas y Amazónicas del Perú (National Organisation of Indigenous Andean and Amazonian Women of Peru – ONAMIAP) demonstrated in front of Peru’s Congress to demand the approval of a bill recognising the rights of nature as a living being. The activists called for a shift in perspective in the face of the climate emergency. “We are already very affected, because the State has never given Mother Nature, Pachamama, what she deserves. We demand that the law be passed to respect her, because just as we have rights, Mother Nature also has rights,” said environmental defender Nelly Mejía. However, the bill stalled in Congress following a debate.

In July 2021, Indigenous peoples and rural workers held a sit-in in front of Congress against a bill known as the “Law on Self-Defence Committees” which they said violates their autonomy and would lead to the militarisation of Indigenous territories. The country’s Ombudsperson also expressed concern about legislation recognising these committees. The vote on the bill was postponed by lawmakers.

On 14th July 2021, ten Indigenous and rural workers’ organisations issued a statement calling for laws to protect Indigenous or Original peoples and Afro-Peruvians. They welcomed the work of legislative Commission of Andean, Amazonian and Afro-Peruvian Peoples, Environment and Ecology (CPAAAAE), but highlighted the lack of efficiency in Congress, as well as the postponement and suspension of bills that are relevant to these communities.

On 29th March 2021, journalist Carlos Tafur received a death threat by voice message. Tafur hosts Señal Informativa Digital, a daily news and opinion programme on Radio Estereo G 96.5. As reported by the Committee to Protect Journalists (CPJ), an unidentified man told the reporter: “If you continue raising hell on the radio, you will see your head hanging from the radio station… You will also see your family hanging from the radio station. Keep it up, and you will see.”

Tafur often discusses alleged mismanagement of public works projects and corruption by municipal officials in Huambos, Longar and Rodríguez de Mendoza in the Amazonas region. In recent weeks, his show covered local protests denouncing the lack of road maintenance by a company contracted by the municipality. The International Federation of Journalists and the Asociación Nacional de Periodistas de Perú (National Association of Journalists of Peru - ANP) demanded that authorities act to guarantee Tafur’s safety.

On 5th April 2021, Peruvian public prosecutor Yovana Mori García sent 13 petitions to OjoPúblico, an independent investigative news website, demanding the outlet turn over documents relating to the Panama Papers investigation. These include evidence of money laundering involving real estate, mining, timber and agro-industrial companies as well as a former presidential candidate. The prosecutor warned she would seek a court order to access the documents if the outlet did not comply, a measure that could include the seizure of its computers and laptops.

OjoPúblico responded that they do not possess the documents sought by the prosecutor, as they were part of a database controlled and administered by the International Consortium of Investigative Journalists (ICIJ). The outlet also said that they and the other news organisations that contributed to the Panama Papers investigation signed confidentiality agreements not to reveal their sources.

Polarisation in the elections impacted the working conditions for local journalists and international correspondents. Reporters covering the run-offs and the subsequent wait for confirmation of its results faced corporate pressure and hostility while covering demonstrations and attacks. ANP recorded 71 attacks on journalists covering elections from January 2021 until Pedro Castillo was declared president-elect in July 2021.

On 19th May 2021, a group of people at a rally in support of Pedro Castillo in Ayacucho assaulted reporter Stefanie Medina and camera operator Carlos Brown, with television outlets América Televisión and Canal N. According to CPJ, as the reporting team was walking through the rally, several people in the crowd started insulting Medina and Brown and tried to grab their equipment after a speaker implied that journalists accepted bribes for their coverage. After Castillo’s speech, also implying journalists were paid for biased coverage, a woman kicked Medina in the back and a man hit Brown on the head with a stick.

Separately, on 8th June 2021 Peru’s press association ANP said more than ten press workers of América Televisión and Canal N were forced to resign, reportedly for refusing to give in to pressure from the company to produce journalistic coverage favourable to Keiko Fujimori. As reported by the LatAm Journalism Review, the main precedent for the crisis was the dismissal of Colombian journalist Clara Elvira Ospina, who was news director of the two channels for nine years. Ospina was fired in May 2021, after a meeting between Fujimori and news editors where she allegedly said the channels would be impartial in their reporting.

On 11th June 2021, pro-Fujimori groups called on supporters to organise a protest against “the lying press” in front of the house of La República director Gustavo Mohme. On 16th June 2021 the Asociación de Prensa Extranjera en el Perú (Association of Foreign Press of Peru - APEP) condemned harassment and defamation against some of its members during the second round of elections.

The organisation highlighted the smear campaigns against Jacqueline Fowks, El País correspondent, and Paola Ugaz, ABC correspondent, who have been harassed through social networks. Fujimori supporters criticised both journalists’ electoral coverage, accusing them of bias favouring Pedro Castillo. In Fowks’ case, a social media message shared her photo and incited attacks against her, saying: “This is the face of Jacqueline Fowks, in case you meet her on the Peruvian streets and want to tell her what you think of what she writes.” APEP expressed concern over the adverse working conditions, where it said impartial reporting led to insults, intolerance and attacks on honour.

According to OjoPúblico, Fujimori supporters also promoted a campaign to identify and disseminate phone numbers and addresses of politicians, actors, activists, journalists and other public figures who expressed criticism of their candidate. They shared photographs of these people with the message “Let’s make them leave the country”. As reported by OjoPúblico, a far-right group known as “La Resistencia” (The Resistance) was involved in the promotion of some of these smear campaigns and attacks. On 14th July 2021, at least six press workers covering pro-Fujimori demonstrations in Lima were attacked by members of La Resistencia.

On 9th June 2021, Peru’s Council of Ministers approved a bill creating a National Authority of Transparency, Access to Public Information and Protection of Personal Data. The bill introduces a series of amendments to the Law on Transparency and Access to Public Information (Law 27806) and the Law on Protection of Personal Data (Law 29733), which would improve the processing of requests for access to public information and reduce loopholes that have led to power abuses. The new authority, which would integrate the current oversight bodies on these matters, would have the status of a specialised technical body, enhancing its autonomy and budgetary resources. The project will be analysed by the country’s Congress.

Reports on freedom of expression in Peru

According to the 2021 Press Freedom Report prepared by the Peruvian Press Council for the Inter-American Press Association (IAPA), the period between October 2020 and March 2021 saw the worst repression of freedom of expression in Peru since the government of Alberto Fujimori – which ended in 2000. According to the report’s figures, there were 223 attacks on journalists and media in the period, mainly carried out by security agents (79), civilians (57) and public officials (53). At least 40 journalists were attacked by police while covering protests against the removal of former president Martín Vizcarra and Manuel Merino’s brief time in power.

A separate report, produced by CPJ and Thomson Reuters Foundation’s TrustLaw programme, analysed how emergency measures adopted in response to the COVID-19 pandemic impacted press freedom, freedom of expression and access to information in the five Latin American countries. While Peru’s authorities included media work as an “essential service” and gave members of the press exemptions to movement restrictions, law enforcement was not always aware of these exemptions. This led to numerous cases of journalists harassed or briefly detained by police for breaking quarantine, even when carrying the necessary identification allowing them to travel freely.