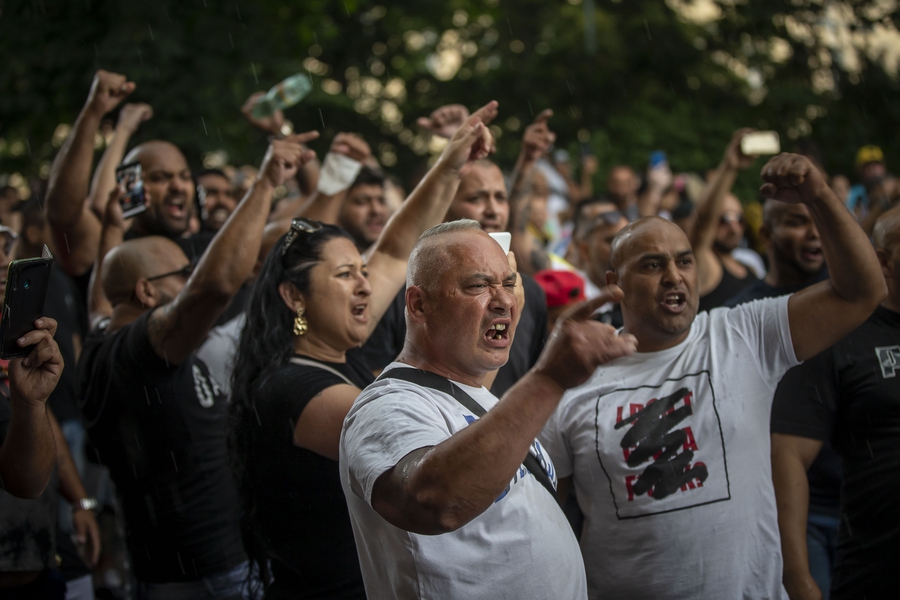 Protests over the death of a Roma man (Photo by Gabriel Kuchta/Getty Images).

In a resolution dated 9th June 2021, the European Parliament (EP) called for a stop to subsidising the business empire of Czech Prime Minister Andrej Babis over conflicts of interest. Babis’ firms are among the largest recipients of EU farming subsidies, in addition to funding dispersed by national authorities and reimbursed by the EU. Although Babis shifted his assets into trust funds in order to avoid legal troubles, in April 2021 a European Commission audit found that he was still in control of the Agrofert group, a conglomerate of farming, chemical, media and other firms. The European Parliament's resolution insists that Babis should either give up economic interests in his companies, or the country should not receive EU funding, or, if he does not want either of those options, he should leave politics. Babis rejected the resolution, accusing opposition parties of exploiting the EU platform ahead of an election in October 2021. According to Reuters, the EP’s resolution “does not lead to any direct action. But it calls on the European Union's executive, the European Commission, to take a further look at the situation and potentially even start procedures that could halt funding to the Czech Republic”.

On 19th June 2021, a Roma man in Teplice died after a police officer knelt on his neck. According to police, a court autopsy report confirmed that Stanislav Tomas, a 46-year-old man, died of a drug overdose and not as a result of excessive force used by the police. Video footage of the incident shows police officers kneeling on Tomas' neck and chest for about five minutes. The Roma population in the Czech Republic faces a raft of discrimination, with many living on the outskirts of cities where there are few amenities and few opportunities for employment. The Council of Europe and Amnesty International have called for an independent investigation into the incident.


“Amnesty International considers that the neck restraint technique used by the police during the arrest was reckless, unnecessary and disproportionate, and therefore unlawful. Amnesty International further calls on the Czech authorities to prohibit the use of such technique as a means of control, as it severely restricts breathing.”

Tomas’s death resulted in a spontaneous demonstration outside a police station near Teplice railway station. Originally people gathered to mourn his death, but many people brought flags and started chanting slogans such as: “Come and kill us”, “Police assassins” and “stop racism”. After the police called upon the assembly to break up, the crowd obeyed the call and started to disperse.

On 7th July 2021, an estimated 400 protesters gathered in Prague to protest against COVID-19 related measures and COVID certificates. The protests were organised by the Wanted PES and Free Bloc movements. Police officers were in attendance but the protest remained generally calm. However, one protester was apprehended by the police when he did not respond to the police request, after blocking traffic. The crowd watched a live screening of the Chamber of Deputies, as they voted on an amendment to the Public Health Protection Act, which dealt with COVID-19 passes that allow for easier travel regulation within EU member states. The crowd voiced their dissent as Minister of Health Adam Vojtěch spoke in front of the Chamber in favour of the amendment to legally authorise issuing of COVID-19 certificates.

On 24th May 2021, Czech President Milos Zeman's office announced that it would stop providing information to several investigative media outlets, including public broadcaster Czech Television, Respekt, server Seznam Zprávy and daily Deník N. These outlets have reported critically on Zeman in the past. The decision was justified by Zeman’s office under the pretense of joining the EU’s fight against misinformation. In practice, the announcement will not have a significant impact on these outlets, as the President is known to be unreactive to these outlets’ media inquiries even before the announced ban. Deník N deputy editor-in-chief Lukáš Werner told the Committee to Protect Journalists (CPJ):

“In most of the cases, whenever we asked questions, we either have not received any answer or sometimes we received insults or even quotes from the Bible as an answer.”

The International Press Institute (IPI) condemned this move and said that the act of purposely withholding information on a discriminatory basis violates the constitution of the Czech Republic, which stipulates that “state power serves all citizens'', as well as the Charter of Fundamental Rights and Freedoms, which guarantees the right to information. The decision to withhold information places barriers on access to information, hinders the work of the free media and further undermines the freedom of the press.

On 27th June 2021, during a television show, President Milos Zeman was asked about the Hungarian law banning LGBTI material from schools. During the interview, he commented that "if you undergo a sex-change operation you are basically committing a crime of self-harm. Every surgery is a risk and these transgender people to me are disgusting." More than half of the 27 EU member states have opposed the Hungarian Law, urging Prime Minister Viktor Orban to respect LGBTI rights. The Czech Republic however has not done so, as Zeman said condemning the law would be meddling in a country's internal affairs. "Viktor Orbán says that he is not against homosexuals, but that he is against the manipulation not only of parents but also of children in sex education," Zeman said. "I see no reason to disagree with him because I am completely annoyed by the suffragettes, the Me Too movement, and Prague Pride.'' Zeman's incredibly discriminatory comments came during the LGBTI Pride month.

Responding to these comments, Daniel Zikmund from Prague Pride told the BBC:

“We were really sad to hear such a statement, especially because it has a damaging effect to mental health of the LGBT+ in [the] Czech Republic. LGBT+ are discriminated not only socially but even through legislation processes. This just seems to be going backwards and it is not helping at all."