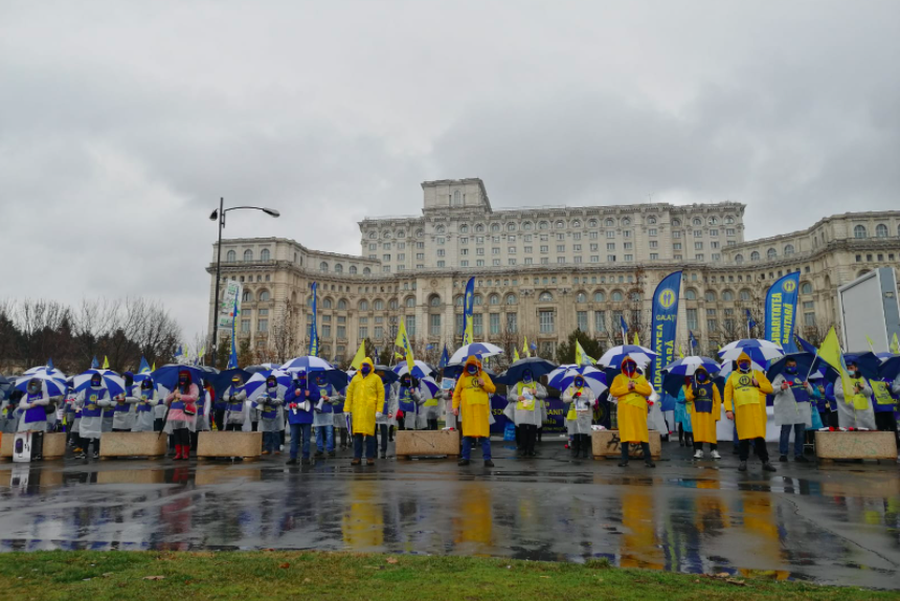 On 28th March 2021, the government of Romania tightened restrictions aimed at limiting the spread of COVID-19, extending the state of alert for the next 30 days. This is the result of the latest COVID-19 records - with the highest numberof patients in the intensive care since the start of the pandemic.

Newly introduced lockdown restrictions sparked a number of protests throughout the country under the aegis of "Freedom", starting on 29th March 2021. According to media reports, the demonstrations were mainly organised by the far-right AUR party which earlier supported anti-vaccination protests at the beginning of March 2021.

Some of these protests have turned violent, with 12 policemen being injured by the demonstrators and some of them taken to the hospital. No evidence of using disproportionate force by the police was reported. It is reported that one person was detained. The police have identified almost 200 participants of the demonstrations and issued fines for breaking the ongoing COVID-19 curfew, safety measures (such as wearing a mask or social distancing) and vandalism, in the total amount of 40,000 euros.

“We will not drop these [COVID-19] measures because they are designed to protect us. The actions of 2,000 people will not make us change our mind,” -reacted the prefect of Bucharest Alin Stoica.

As reported previously, in November 2020 healthcare workers protested in Bucharest over staff and financial shortages. In March 2021 the "Sanitary Solidarity" Federation of Romania (FSSR) once again staged demonstrations in front of the Parliament on the threshold of the debate over the draft law for the state budget 2021. In addition to the demand to increase budgetary allocations for the health sphere, FSSR demanded that the government adopt the necessary measures aimed at protecting the safety of health care workers from COVID-19 infections, increase basic wages, reduce the retirement age and provide workers with benefits in accordance with their categories. In the official press release FSSR said:

“The Government's intention to reduce wages by eliminating food allowances, reducing bonuses and eliminating holiday vouchers shows that the current government is proving completely indifferent to the efforts and sacrifices of health workers. In the context in which health professionals are prohibited from resigning and strike-type protests are prohibited, the reduction of wage income moves these workers into the area of forced labour." (Translated from Romanian).

A new law on whistleblowers

Stelian Ion, Minister of Justice, said: “The Ministry of Justice is working on the implementation of the European Directive 2019/1937, and we welcome contributions from other MPs, civil society, and sector experts. We seek to bring the Romanian legislation in line with international standards, and we have the same goal in this respect: strong and modern legislation in Romania, offering solid protection and proper incentives for whistleblowers.”

The Romanian Whistleblower's Law is famous for being the first of its kind adopted in Europe. However, it fails to provide sufficient protection for whistleblowers. The Romanian human rights organisation APADOR-CH has analysed the proposed new legislation and highlighted several flaws. For example, whistleblowers revealing information on a problematic public procurement in the army will be punished according to the Criminal Code. In addition, whistleblowers will be expected to report both internally and externally (to authorities) before reaching out to the press. Compared to the current legislation, this draft law is more restrictive, eliminating the whistleblowers’ right to choose the form of reporting.

“Often when it comes to the transposition of EU directives (and this one is no exception), the Government fails to read into its spirit, limiting itself to an automatic transposition of its articles. The purpose of the draft law should be to encourage rather than discourage the disclosure of violations of the law. However, many of its provisions contradict this purpose, while good provisions of the current law are discarded. For example, according to the current draft law, whistleblowers reporting directly to the press would not benefit from the protection offered by the new law while the others have to meet a set of cumulative conditions.”

“Eight years after the ECHR judgment Bucur and Toma v. Romania (and 25 years since the facts of the case), Romania still does not have a law which is more nuanced when it comes to the offences committed by a whistlblower. There is an imperative need to introduce a provision saying that the act of accessing or gathering evidence in order to prove the law’s violation does not constitute an offence. Hopefully, the public debate organised by the Ministry of Justice is just a first step of the legislative process meant to shape the best possible whistleblower's law and that all relevant stakeholders will take part and effectively contribute to the debate.”

The Center for Investigative Media (CIM), Dela0.ro and three journalists, Ovidiu Vanghele, Vlad Stoicescu and Diana Oncioiu are facing legal action for a series of articles related to sex abuse and rape at an Orthodox Christian high school in Romania, published on the website safielumina.ro. A bishop is amongst the persons named in the media reports for allegedly being involved in the abuse and is now on trial for the rape of one of his students, who brought a criminal case against him. The objective of the lawsuit against the journalists is yet to be announced, however there is an interim request that the stories published in relation to the accused bishop be removed from the website.