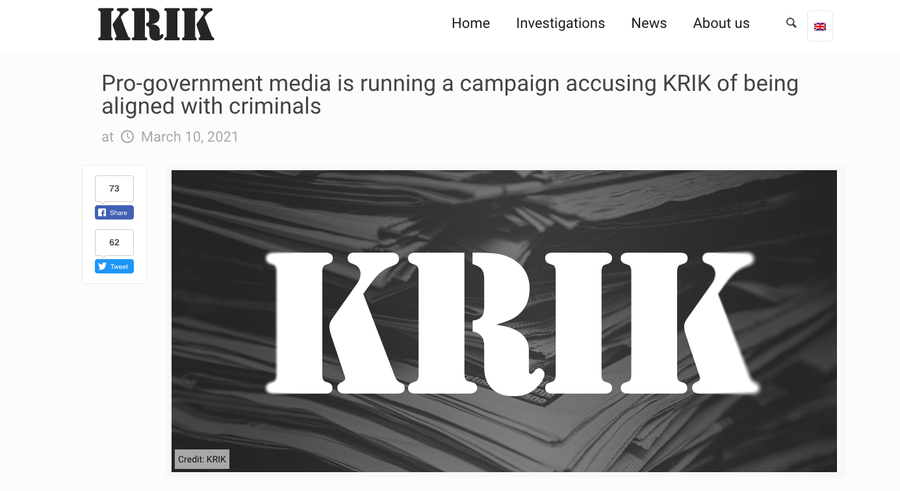 Investigative portal KRIK and other CSOs have been subjected to a smear campaign.

The latest developments regarding the case of the “List” and the Administration for Anti-Money Laundering include responses from international institutions relevant to this topic. On 11th November 2020, a statement was issued by the United Nations Special Rapporteurs alleging that Serbia had abused its anti-money laundering and anti-terrorist financing mechanism to intimidate and restrict the work of civil society and human rights defenders and stifle criticism of the authorities. The statement also stresses that measures adopted by individual states to fight against money laundering and terrorist financing must be in accordance with international law, especially human rights law, including the rights to freedom of expression and association of civil society.

“We fear that such use of the Serbian Law on the Prevention of Money Laundering and the Financing of Terrorism interferes with and limits the freedoms of expression and association of people belonging to these groups, and their right to take part in the conduct of public affairs,” the experts said.“The unjustified use of this law risks intimidating civil society actors and human rights defenders, restricting their work and muffling any criticism of the Government,” they added.

In the response to the letter, the Financial Action Task Force (FATF) indicates that states must have grounds for suspicion when a subject being investigated is involved in money laundering or terrorist financing. The FATF response indicates that the actions of the Administration for the Prevention of Money Laundering (APML) could be considered contrary to the standards set out in FATF Recommendation 29, which refers to the competences of financial intelligence units. The recommendation states that the powers given to financial intelligence bodies in the fight against money laundering and terrorist financing do not include seeking non-selective requests for information from commercial banks for the purposes of conducting strategic analyses.

Civil society organisations (CSOs) and media featured on the “List” published a statement demanding the APML issue a response to the FATF’s findings as soon as possible and take concrete steps to repair the damage caused to organisations and individuals who were wrongfully targeted.

On 9th March 2021, a smear campaign was launched, simultaneously appearing in all the major government-funded tabloids in Serbia, making tenuous connections between the investigative portal KRIK, a member of the Organised Crime and Corruption Research Network (OCCRP), and an organised criminal group headed by recently-arrested crime boss Veljko Belivuk, who is currently under investigation for several murders. The campaign made unsubstantiated and false claims that Belivuk fed information to KRIK for publication. Not only is this a very dangerous untruth that discredits the work of investigative journalists, but it also directly endangers their physical safety by placing them in the middle of a heavily-publicised and sensationalised crackdown on organised crime activities. (a subtitled video of a segment targeting KRIK as broadcast on regime television channel TV Pink can be accessed here). The Investigative portal said:

“You can imagine how these obnoxious lies are directly affecting our safety as we are not sure what to expect – from physical attacks to even arrests.”

This attack, which can be seen as an attempt to divert the public’s attention away from the documented connection of governing structures in Serbia with these criminal groups, which KRIK has exposed for years through its investigative work, comes at a time when the atmosphere in society has been further shaken by unethical reporting on organised crime. Immediately preceding the smear campaign against KRIK, disturbing graphic photos of violence relating to the Belivuk case were shown by the President during a prime time broadcast, simultaneously on thirteen television stations. Insinuating a connection between KRIK and an accused murderer on such tenuous grounds represents a transparent targeting of the portal’s journalists. It should be noted that such baseless tabloid attacks are able to reach an substantially larger audience compared to the rebuttals by those attacked, which further contributes to the vulnerability of those targeted by such smear campaigns.

“The publication of such baseless claims linking a reputable non-profit investigative outlet to a prominent member of organised crime puts KRIK’s journalists and other staff at risk. Moreover, we fear that these allegations may be used as a pretext to initiate police investigation of the independent outlet and use state entities to further intimidate the outlet. KRIK is one of the few outlets to publish stories on Belivuk’s gang and its ties with the Serbian government and the ruling Serbian Progressive Party.”

On 11th March 2021, the attacks and smears escalated further. During a regular session of the National Assembly, the chief of the ruling party SNS’s parliamentary group “Aleksandar Vučić - For Our Children” and president of the Administrative Committee, MP Aleksandar Martinović,threatened that anyone who criticised the government would be “beaten in a sack”, thus openly calling for violence. While addressing the assembly, Martinović made reference to an “attempt to stage a coup d’état in Serbia and assassinate the president of the Republic, Aleksandar Vučić”, and accused “those who consider themselves the so-called pro-European and pro-democratic opposition” of doing so, naming specifically the Center for Research, Transparency and Accountability and the Open Parliament Initiative. He also described critics of the government as a “sack of people stacked against Aleksandar Vučić”, adding that they (the ruling party parliamentary group) “are going to hit that sack, as hard as possible”, until “they tear it apart” (a subtitled video of his speech can be accessed here). This dangerous rhetoric was echoed by Deputy Speaker of the National Assembly Vladimir Orlić, who, in the days that followed, continued spreading these narratives about CRTA and KRIK in the Assembly, as well as online.

On 17 March 2021, the attacks continued. Once again targeting KRIK and CRTA in front of the Assembly, Martinović discussed the personal finances of individuals employed by CRTA, in order to portray them as a group of rich foreign agents with expensive cars and apartments, whose offices are located in the most expensive areas of Belgrade. In addition, he mentioned the founder and director of CRTA, Vukosava Crnjanski, and revealed the exact location of her place of residence and the model of car she drives, stating publicly "We know where you live". Even more worryingly, he went on to disclose the exact amount of the individual installments CRTA has received from USAID. This information is only known to CRTA, its donors, its bank and the Ministry of Finance and the Administration for the Prevention of Money Laundering (a subtitled video of his speech on March 17 can be accessed here). It is important to highlight that both CRTA and KRIK were featured on the list of 57 organisations, media and individuals whose financial transactions were being investigated by the Administration for the Prevention of Money Laundering on suspicious legal grounds in July2020 (see previous update). As CSOs at the time warned, the government seems to have used the data collected in this probe as a means with which to attack CSOs and media critical of them.

“We expect that the person who wrote in such a manner about underage children of people employed at Juzne Vesti will be found as soon as possible. We will continue reporting in accordance with professional standards, and not in accordance with the mood of extremists, individuals or groups, who are always ready to create targets of journalists and their families.”

“A person who uttered such horrible and irrational threats must be held accountable before the court...These journalists faced threats, pressures and insults from the moment the media was established. They deserve respect and support, but also full protection. We hope this incident will be the last.” - Zeljko Bodrozic, President of the Independent Journalists Association of Serbia (IJAS).

On 10th January 2020, between two to three thousand people staged a protest over air-quality conditions in Serbia, under the banner “Serbia without Smog”. The protest was organised by Eko Straža.

“For us, clean air and a healthy environment are guaranteed by article 74 of the constitution, and we came here to exercise our right,” - Bojan Simišić from Eko Straža.