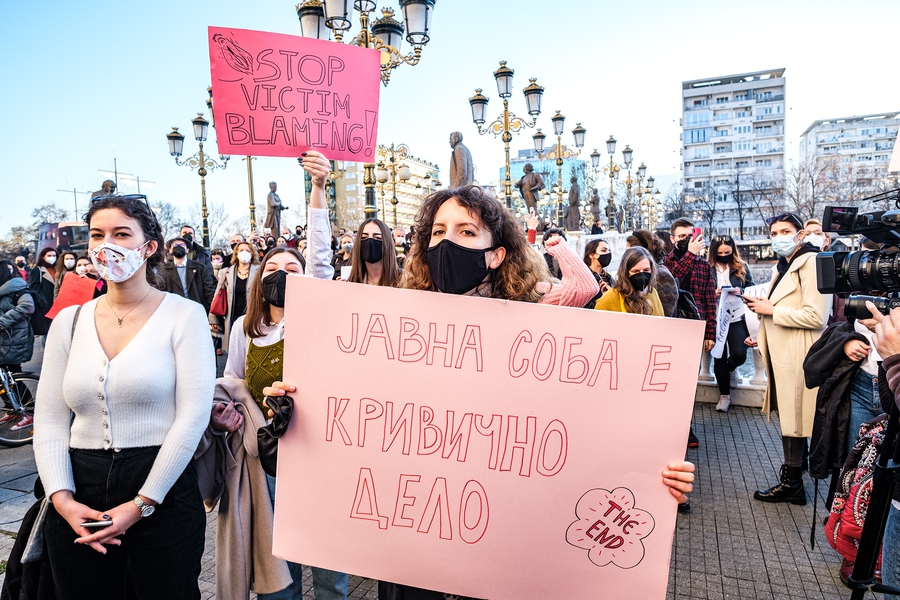 During this reporting period, several protests were held:

A grouping of North Macedonia NGOs filed a lawsuit over a textbook that “blames women for the rising number of divorces, condemns abortion and classifies same-sex partnerships as debauchery”. The NGOs have accused the textbook of showing discriminatory speech against numerous social groups.

In a separate development, global voices condemned an online hate campaign against the Metamorphosis Foundation, calling for authorities to investigate the hate attacks. The Foundation advocates freedom of expression, freedom of the press and the protection of digital rights in the region.

“The attacks have exploited the volatile political situation that currently prevails in North Macedonia, falsely accusing Metamorphosis of colluding with Facebook to censor “patriotic” content from the social media platform. They also include calls for physical violence towards Metamorphosis staff, threats of sharing of their private information, and online harassment.”

“We call on North Macedonia’s authorities to investigate these activities and to enforce the appropriate legal remedies against the perpetrators, as well as provide protection to Metamorphosis staff.”

The Association of Journalists of Macedonia (AJM), the Independent Trade Union of Journalists and Media Workers (SSNM), the Macedonian Media Institute (MIM) and the Council for Media Ethics (CMEM) expressed concerns regarding the process of amending the Law on Audio and Audiovisual Media Services, initiated by a group of ruling majority MPs. They state that according to the proposal, the election of members of the Program Council in Macedonia Radio Television (MRT) and the Agency for Audio and Audiovisual Media Services (AAAVMS) by the Assembly proposes the election to be done through the majority votes of the total number of MPs, instead of a two-thirds majority, as per ongoing regulations. The media organisations say that failure to follow the current regulation would risk “party-political influence” by MPs in the election of members of these bodies.

Another concern flagged is that it is proposed that the Law be adopted in a fast-track procedure, without any explanation in the proposal, leaving no opportunity for “public debate or transparency and involvement of stakeholders” in its adoption.

The Association of Journalists of Macedonia (AJM) strongly condemned the attack on a team of the Media Information Agency that professionally reported on the protest related to the "Monster" case (see above). The AJM demanded that the Ministry of Interior punish all violence against journalists.

“Impunity for attacks on media workers can incite more serious violence against journalists, further endangering their safety, the right to freedom of expression and the right to inform citizens. That is why it is important to amend the Criminal Code as soon as possible in order to systematically protect journalists and media workers.”

On 11th February 2021, the creator of the domain vaksajns.mk, Adil Bakiu, was summoned by police for questioning following a report from the Ministry of Health for alleged "intrusion into the official website vakcinacija.mk". The domain vaksajns.mk was registered after the Prime Minister Zoran Zaev mispronounced the word for vaccines in English. According to Bakiu, it is worrying that satirical cases of this type are prosecuted more quickly by the state than others that are much more serious, such as the ‘Public Room’ case.