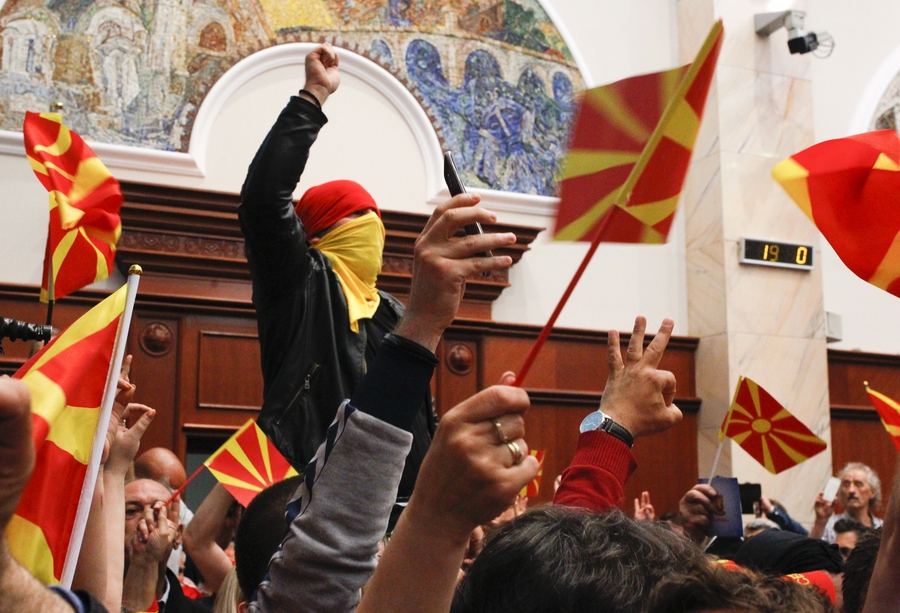 Taken during the 2017 "Bloody Thursday" (REUTERS/Ognen Teofilovski via Gallo Images).

In a separate development, the Metamorphosis Foundation, a Skopje-based CSO which aims to strengthen awareness and capacity of citizens and civil society, was subject to a defamation campaign by portal Lider.com.mk. A text on 12th November 2020 entitled “(PHOTO) These are the people who delete content from Facebook in Macedonia!” was published on the site and lists photos of the Foundation's employees. The article was shared and hateful comments were further made against the staff, such as: employees should be “hanged on a pole” and should get infected with Covid-19, to be spat on, etc. The Foundation said:

“It is unfortunate that, instead of serving as an example, the transparency of the Metamorphosis Foundation is being abused for intimidation, public lynching and dissemination of disinformation.... The publication of such false claims causes great damage to the reputation of the Metamorphosis Foundation and all employees. At the same time, the safety of employees is endangered through a call for a public lynching.”

On 26th November 2020, around 2,000 demonstrators gathered in an anti-government protest, calling for the resignation of Prime Minister Zoran Zaev. The protest, which was staged by supporters of the opposition VMRO-DPMNE party, was in reaction to an interview of the PM in which he commented on the history between Bulgaria and North Macedonia. Due to COVID-19 restrictions, the protestors gathered in cars. Protests were staged in several cities.

“In the first half of 2020, attacks on and discrediting of journalists was noticed on social media networks, especially against women journalists on the basis of their gender.”

In a separate development, the European Court of Human Rights fined North Macedonia for violating the right to freedom of expression of Nikola Gelevski. Gelevski published an article regarding assaults against student protestors in March 2009, for which he was sued by Dragan Pavlovic Latas (then editor-in-chief of Sitel Television and editor-in-chief of the newspaper "Vecer"). The European Court ruled that the government had interfered with the applicant’s freedom of expression. It noted:

“The Court notes that the applicant (Nikola Gelevski) was a regular columnist in a daily newspaper. "Interference must therefore be examined in the context of the essential role of media freedom in ensuring the proper functioning of a democratic society. "

The Association of Journalists of Macedonia (AJM) condemned the decision of the Basic Civil Court in Skopje after it rejected the lawsuits of two journalists against the alleged violation of their rights by the state. The case centres around the events of the 2017 “Bloody Thursday” at Parliament where journalists were insulted and beaten. AJM marked the court’s verdict as detrimental to the freedom of expression in North Macedonia and called for the protection of the rights of journalists.

“This verdict is a missed opportunity to protect the rights of journalists and is another proof that there are double standards for the court when it comes to politicians and journalists."

According to Mapping Media Freedom, on 9th October 2020, journalist Christian Landov was threatened with lawsuits for insult and defamation over an investigation published on online portal A1on.mk which details how a Macedonian beauty salon acquired EU funds to the value of €270,000 intended for education. Following the report, Director of the National Agency for European Educational Programmes and Mobility, Lidija Dimova, threatened the journalist with legal action. The Association of Journalists of Macedonia (AJM), the Independent Trade Union of Journalists and Media Workers (ITUJMW) and the Council for Media Ethics in Macedonia (CMEM) condemned attempts to discredit the journalist.

“We emphasise that public figures, especially elected and appointed officials are subject to public criticism and this should be accepted as part of their work. We instruct those concerned, instead of publicly belittling journalists and dealing with journalistic ethics, to turn to the Council for Media Ethics in Macedonia or the Council of Honour in AJM, but also to use the right to deny if necessary.”

In a positive development, during a webinar, the Minister of Justice reported that the government had started to draft a new Criminal Code to better protect journalists and media workers, which includes more severe punishments for perpetrators of targeted attacks against journalists. The drafting of this new Code included consultations with representatives from unions and organisations of journalists.