Journalists come under attack during violent protests over COVID-19 curfew 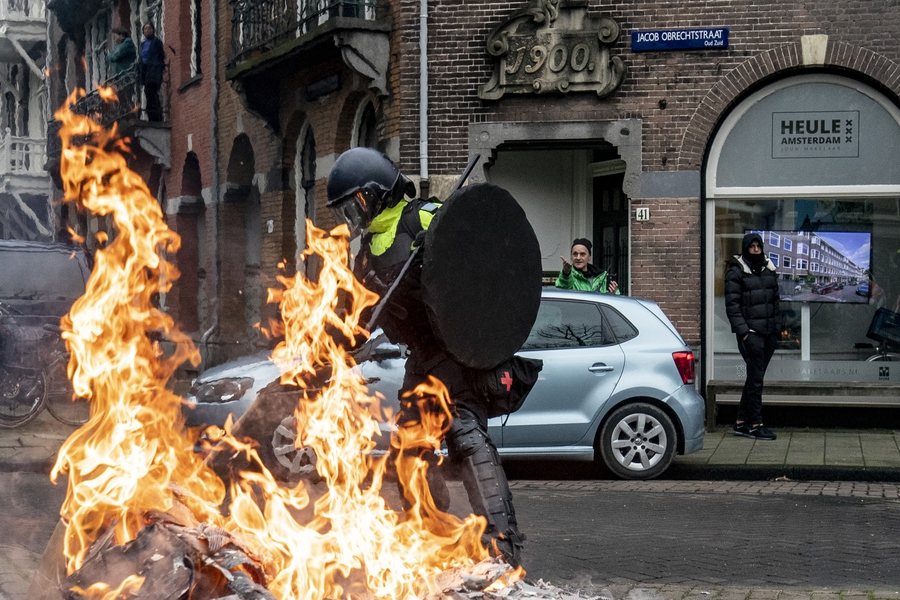 In January a group of 50 organisations led by UNICEF called for the opening of primary schools in the Netherlands. Primary schools had been closed since 15th December 2020 to limit the spread of COVID-19. However, the collective, including CSOs and mental health organisations, says this is harmful, especially for vulnerable students, and is not necessary. On 8th February 2021 primary schools opened again for in-person teaching.

In response to the reinstated curfew to curb the spread of COVID-19, the Netherlands saw a new wave of protests against the government's handling of the health crisis. On 23rd January 2021, the first evening of the curfew, protests took place in several places throughout the country. Some of these turned violent, such as in Urk where rioting youth set fire to a COVID-19 testing centre. The next day unauthorised demonstrations against the measure in Eindhoven and Amsterdam were forcefully broken up by riot-police with water cannon and tear gas when protesters refused to disperse and turned violent. Some of the protesters then started to riot in the city centre. In the following days riots broke out across the country, with mainly young men looting shops, damaging public and private property and even setting fire to a hospital. After some days the riots died down. Several smaller-scale protests were organised in different locations.

Anti-curfew protests broke out across the Netherlands while the govt extended lockdown in fear of the more contagious UK variant. pic.twitter.com/m3kHJjGjZh

Police say around 300 people were detained for rioting so far and 5,700 were fined for breaking the COVID-19 curfew. The riots and looting were strongly condemned by all political leaders with some right-wing opposition leaders even calling for the deployment of the army.

On 10th January 2021, a demonstration against fascism took place in Amsterdam in response to the storming of the Capitol in the US. The protest, under the title “From US to NL, never again fascism” was organised by several CSOs, including Code Red and Extinction Rebellion.

At a demonstration organised by climate action group Extinction Rebellion at Schiphol airport on 6th February 2021, seven protesters were arrested - five of them for vandalism and two for trespassing. As all COVID-19 measures were respected, the mayor allowed the protest to continue after its planned end time. This is not the first time that XR has protested at the airport. As previously reported on the Monitor, protests were also staged on 18th December 2020, where 14 people were detained by police.

The following incidents were documented against journalists by Mapping Media Freedom:

“This is an attack on the free press and independent journalism. That's the worst thing you can experience as a reporter.”

A number of journalists also faced attacks during protests against COVID-19 measures (see above).

"I had nowhere to go, one of those rioters with an army print hoody came up to me, saw my camera and wanted to take it away."