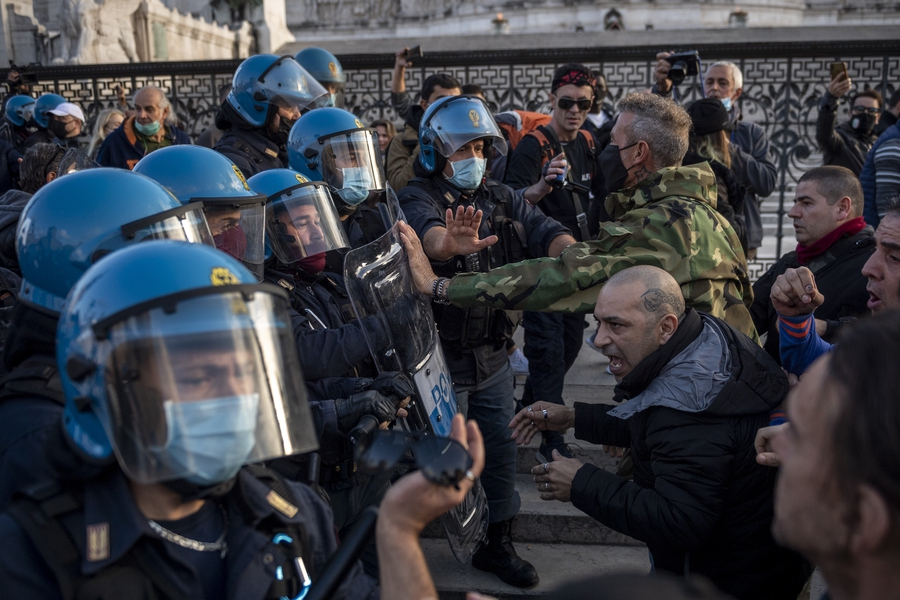 Police and protesters clash during a protest against COVID-19 measures in Rome (Photo by Antonio Masiello/Getty Images).

With COVID-19 infections rising and new confinement measures looming, protests have flared up in cities all across Italy. People have taken to the streets to express their concerns about the economic consequences of a second lockdown, which some feel is not being adequately addressed by the government. While protests were largely peaceful, in some cities, including Florence, Rome, Naples, Turin and Bologna, protestors clashed with police as the demonstrations turned violent. Riot police deployed tear gas and several dozen protesters were arrested. Media reports suggest that the Italian mafia have stoked violent anti-lockdown protests to protect their interests.

Over the last 3 weeks, #MediaFreedomRR partners have documented at least nine incidents involving 14 members of the Italian media in six different cities in relation to anti-lockdown and anti-mask protests. Here is our statement https://t.co/7TMe4Cqgyk #COVID19 pic.twitter.com/RxVwemSEcH

“During a public health, economic and social crisis of this scale, journalists should be more than ever able to cover the situation. But the media are the targets of systematic violence that is intensifying by the day. We call on all Italian politicians to firmly condemn these attacks and we urge the police to provide journalists in the field with real, constant protection.”- Pavol Szalai, the head of RSF’s European Union and Balkans desk.