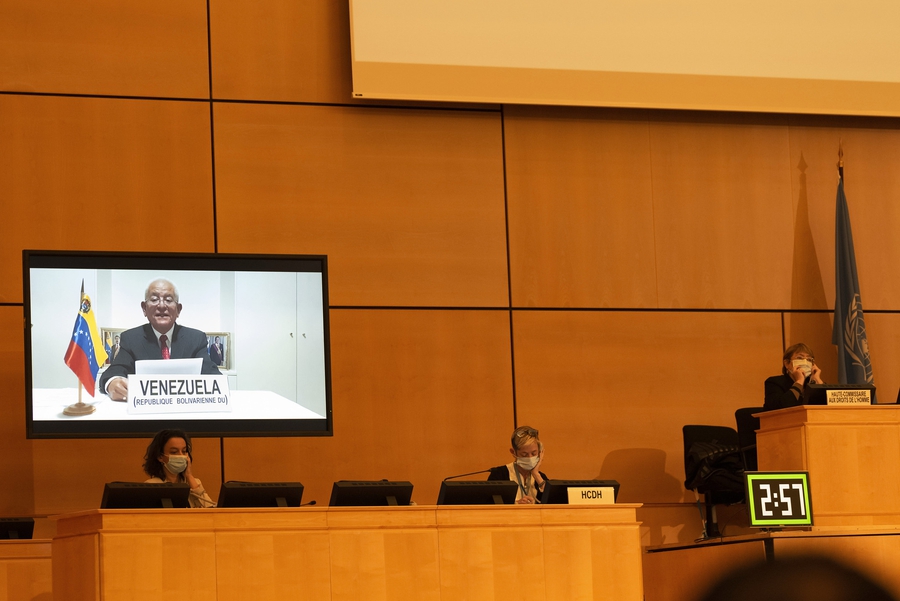 A report by the UN Independent International Fact-Finding Mission on the Bolivarian Republic of Venezuela, published on 16th September 2020, found evidence of crimes against humanity in the country. In a review of over 2,000 cases, the Mission documented patterns of violations and crimes pursuant to State policies, and which were part of widespread and systematic conduct.

These included repression of dissent and civil society through arbitrary detentions, enforced disappearances, torture and extrajudicial executions. In some cases, perceived government opponents were accused of spurious crimes, evidence was planted and authorities flouted due process. Violations amid Venezuela’s increasingly violent response to mass opposition protests were also documented, including the killing of 36 protesters who were shot with firearms and less-lethal munitions, as well as torture and other ill-treatment of protesters in detention through beatings, humiliation and sexual violence.

On 6th October 2020, the Human Rights Council renewed the Fact-Finding Mission's mandate for a further two years and extended its scope.

In a related development, UN Secretary-General Antonio Guterres included the case of civil society organisation Programa Venezolano de Educación y Acción en Derechos Humanos (PROVEA) in a report (A/HRC/45/36) to the Human Rights Council covering alleged cases of reprisals and intimidation for cooperation with United Nations human rights mechanisms. PROVEA was vilified by high-level public authorities on social media and public television after participating in events during a visit from the UN High Commissioner for Human Rights, Michelle Bachelet, in 2019.

On 17th September 2020, trade union member Franklin Gascón was arbitrarily detained in Upata. As reported by news outlets, Gascón presented his documents at a roadway tollbooth and was told there was a pending arrest warrant in his name dating back to 2018. As informed by Movimiento Vinotinto, working on his legal defence, authorities failed to inform Gascón of the charges against him, allegedly keeping him detained for several days without a court hearing – in violation of due process. More than two weeks after his detention, on 5th October 2020, a hearing took place where he was accused of several offences allegedly committed during a protest. The worker was preventively detained on charges of “property damage”, “suppression and paralysis of State industry”, “disregard for authority” and “suspension of work”.

On 26th September 2020, officials of intelligence agency Dirección de Inteligencia y Estrategia Preventivas (DIEP) detained teacher Fidel Martínez in San Mateo, Aragua, after he used his social networks to call on friends to protest. According to news outlet Crónica.Uno, officials of DIEP broke into Martínez’s house and arrested him without a warrant, reportedly charging him with “public incitement”. On 28th September 2020, dozens of people in Aragua joined the protest for public services, also calling on authorities to release Martínez.

According to civil society organisations Observatorio Venezolano de Conflictividad Social (OVCS) and PROVEA, the repression against peaceful protests increased at the end of September 2020. Most of the demonstrations registered by the organisations took place in rural areas and demanded basic goods and services. In particular, in the states of Yaracuy, Aragua, Lara, Nueva Esparta and Sucre, such protests were met with repression by police and paramilitary forces. In Yaracuy on 26th September 2020, a protest in the town of Chivacoa was reportedly repressed with lethal and less-lethal weapons, leaving several people injured and at least 30 detained.

As reported by Espacio Público, 295 cases and 747 allegations of violations of freedom of expression were registered between January and August 2020 in Venezuela. These included 110 cases of journalists detained, 59 of which were directly related to coverage or dissemination of information on COVID-19. In addition, the organisation registered three killings of journalists in August 2020. On 18th August 2020, journalist and teacher José Carmelo Bislick was found dead in Sucre, reportedly after being abducted from his house. On 21st August 2020, social communicators Andrés Eloy Nieves Zacarías and Victor Torres were killed in Zulia during an alleged raid on the offices of local broadcaster Guacamaya TV by members of paramilitary forces.

On 4th October 2020, Espacio Público denounced the harassment of Gregoria Díaz, a journalist with Cronica.Uno and Instituto Prensa y Sociedad Venezuela (IPYS), by public officials. According to the organisation, Díaz has been subjected to harassment since February 2020 because of a social media post about a person hospitalised in the Maracay Military Hospital. The journalist said government supporters have conducted a smear campaign online and that she has been informed of an investigation against her by the Public Prosecutor.

In a separate development, censorship and strategic internet blockades continue. On 3rd October 2020, State internet providers Cantv and Movilnet blocked the website of digital news media Efecto Cocuyo. According to information gathered by Observatorio Abierto de Interferencia de Internet (OONI), the news portal was blocked several times in the period when the country implemented quarantine measures against COVID-19. IPYS also denounced that over 40 news platforms were blocked in Venezuela during this period.