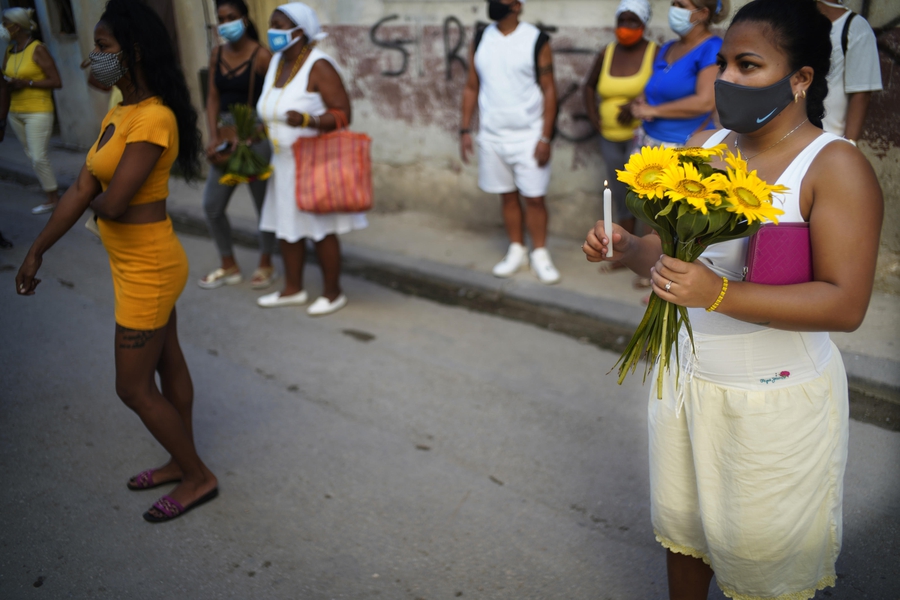 Several political dissidents and protesters were detained for supporting and participating in activities of a peaceful day of protest, the “Revolución de los Girasoles” (“Sunflower Uprising”) convened on 8th September 2020 by Unión Patriótica de Cuba (UNPACU). The mobilisation date was chosen to coincide with the celebration of Cuba's patron saint, Our Lady of Charity, to whom many traditionally offer sunflowers. According to news reports, the protest organisers were told in August 2020 that a march would not be allowed. On 19th August 2020, UNPACU member Aníbal Riveaux Figueredo and three other activists were detained, allegedly as a warning. The defender said police officers threatened reprisals against him and his family if the demonstration took place.

Despite the repression by Cuban authorities, hundreds of people took part in peaceful activities on 8th September 2020 to demand freedom for political prisoners, the release of humanitarian aid and a democratic transition. Supporters inside and outside the country also participated on social media using the hashtag #RevoluciondelosGirasoles.

Within hours, dozens of dissidents were detained – including UNPACU leader and former political prisoner José Daniel Ferrer, Damas de Blanco leader Berta Soler and artist Luis Manuel Otero Alcántara of Movimiento San Isidro. The Inter-American Commission on Human Rights received information of over 80 people arbitrarily detained and condemned the government's crackdown on this peaceful protest. News outlet Radio Televisión Martí reported that at least 129 people were detained, fined and attacked in the context of the mobilisation.

At the end of June 2020, a protest against the police killing of a Black man in Cuba was suppressed and prevented from taking place. Cuban dissidents, artists and journalists denounced that state security agents had harassed them and staked out their homes to prevent them from attending.

According to Human Rights Watch, ahead of the planned protest, Cuban authorities also detained scores of people and accused some of “spreading an epidemic.” Some also reported that their mobile data and phone services were interrupted on 30th June 2020, when the protest was scheduled.

On 23rd August 2020, feminist activist Mery Paulín denounced that police officers threatened to fine her 500 Cuban pesos for using the internet to conduct “counter-revolutionary activities” in violation of Decree 370, which regulates internet use and has in practice been instrumentalised to supress freedom of expression. Paulín is a member of women’s rights organisation Red Defensora de Los Asuntos de la Mujer (Women’s Issues Defender Network - REDAMU), which has reported alleged femicides on the island. The defender said police officers told her they would cut her phone line or fine her if she continued her work, as the only organisation authorised to work on women’s rights would be Federación de Mujeres Cubanas (Federation of Cuban Women - FMC), which is aligned with the Communist Party. The activist also said that a second REDAMU member received similar threats.

On 18th August 2020, Cuban activist José Rolando Casares was released after serving most of his five-year sentence for alleged “contempt”, “assault” and “sexual obscenity”. Casares is a young activist and member of Mesa de Diálogo de la Juventud Cubana (Cuban Youth Roundtable - MDJC). According to human rights organisation International Institute on Race, Equality and Human Rights, Casares and his wife Yamilka Abascal Sánchez were detained in July 2016 after they attempted to defend a friend who was being detained by the police. They were convicted in 2017. Abascal, who received lighter charges, was also sentenced to two years of house arrest at the time.

On 15th August 2020, activist Ángel Castro Carreras was allegedly beaten and detained by Cuban police. Castro Carreras is a member of opposition movement Movimiento Opositores por una Nueva República (MONR). According to a colleague, the dissident was at a park, chatting about activism plans and political proposals with a group of young activists when police officers approached them. The officers reportedly beat and insulted him and also broke the activist’s mobile phone before taking him to a police station. He was released on the same day on “contempt” charges. On 28th August 2020, Castro Carreras was found guilty and sentenced to a year in prison. The opposition organisation denounced increasing attacks against its members; a week before this incident, the leader of MONR was violently detained along with two other activists.

In August 2020, human rights organisations started a campaign for the release of political prisoner Silverio Portal Contreras, following reports that he had been facing extreme health problems and that his wife had not been allowed to see him in months. Lucinda González Gómez, Contreras’ wife, also denounced that the defender has been mistreated by prison authorities and denied medical care, which aggravated his health conditions. He allegedly lost sight in one eye following a beating by prison guards. Portal Contreras, a former activist with Damas de Blanco (Ladies in White), has been considered a prisoner of conscience by Amnesty International and is serving a four-year sentence for “contempt” and “public disorder”. He was granted precautionary measures by the Inter-American Court of Human Rights on 18th July 2020.

On 4th September 2020, journalist Roberto de Jesus Quiñones Haces was released after serving a one-year sentence for “resistance” and “disobedience” because of his work as an independent journalist. As reported by the CIVICUS Monitor, the journalist was convicted in August 2019 and arrested in September of the same year. In the days before Quiñones was due to be released, news outlets reported that authorities were considering moving him to a different detention centre and holding him under the pretext of carrying out COVID-19 testing. This led international human rights organisations such as Amnesty International and Article 19 to join a call demanding the reporter’s release.

On 28th June 2020, security forces arrested journalist Jorge Enrique Rodríguez of the independent news site Diario de Cuba. After being released on 4th July 2020, the reporter told news media that officers had detained him as he was filming and accused him of “contempt”, “disobedience” and made other similar allegations. Upon his release, he was told by authorities that he would not face charges but might receive a fine.

On 27th July 2020, journalist Yadisley Rodríguez Ramírez was detained and had her house raided by state security agents in Camaguey. According to the Committee to Protect Journalists (CPJ), police and security forces broke into her home without a court order, searched the house, confiscated two phones and a laptop and detained her overnight. Rodríguez Ramírez is a reporter for Palenque Visión, a Cuban agency that produces video reports for several independent news outlets. In an interview the journalist said she was held for 15 hours as officers interrogated her on the whereabouts of activist and Palenque Visión director Rodríguez Lobaina.