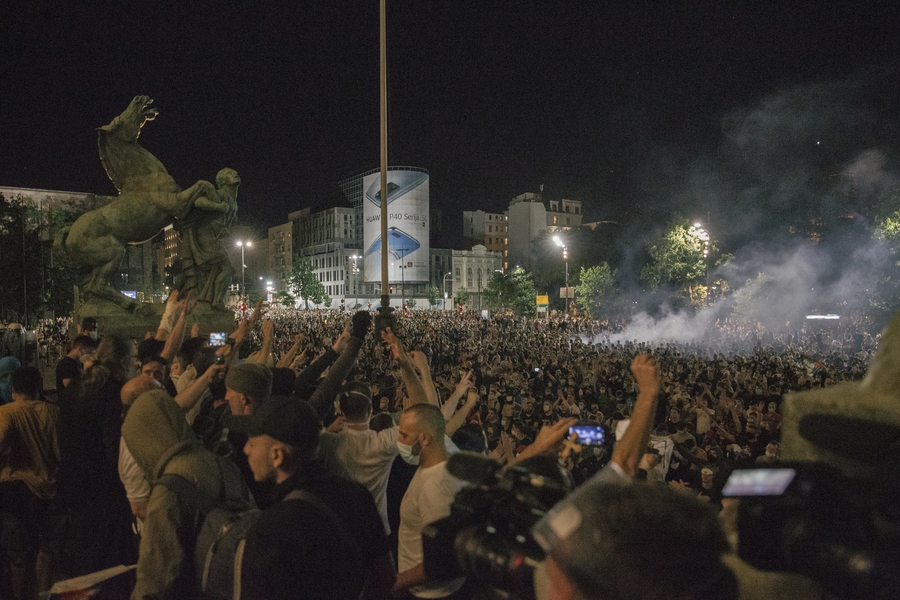 Following the announcement of the re-introduction of a curfew due to the worsening COVID-19 epidemiological situation announced by President Aleksandar Vučić, citizens spontaneously gathered in front of the National Assembly building on 7th July 2020 to express dissatisfaction with the new ban. The protest began with a peaceful gathering of hundreds of citizens and as time went on the demonstrations grew larger, reaching several thousand (it is estimated that more than ten thousand people attended). An hour after the protests began, a group of citizens tried to enter the National Assembly. They succeeded, but soon after the police managed to throw them out.

The protests continued and citizens shouted slogans against the authorities which led to occasional skirmishes and verbal clashes. However, police started using physical force, pushing the demonstrators with shields and hitting them with batons. The situation spiraled out of control and escalated into open conflict on the streets of Belgrade after police fired several tear gas canisters at a crowd of protesters, causing injuries and suffocation to those gathered, and a stampede due to protesters attempting to flee from tear gas. Shortly after this, clashes followed in which dozens of demonstrators and policemen were injured, with a large number of cases of inadmissible brutality by police and persons in civilian clothes who identified themselves as members of the Ministry of Internal Affairs. During the evening police used batons, rubber bullets, tear gas, cavalry and police dogs against protesters and before the end of the night riot dispersal vehicles were brought onto the streets.

One of the most brutal cases of violence was recorded by N1 television cameras in a video showing members of the gendarmerie (Serbian armed police force) beating three men sitting on a bench near the Serbian Presidency with batons, although it was obvious that they were not aggressive or resisting police intervention. Citizens also documented other cases of severe injury to demonstrators through social networks which were flooded with videos and pictures of people covered in blood.

There was also severe violence during the apprehension of citizens. In one case it is alleged that members of the police were holding a man on the ground while tying his hands and pressing down on his head with their foot, which is contrary to all rules of police conduct.

Citizens were particularly upset and distrust the armed forces due to the large number of suspicious-looking men who posed as police officers in plain clothes and took part in the beating, abuse and arrest of protesters. One of the videos shows four such men hitting a man lying on the groundand then taking him in an unknown direction. Additional suspicion was caused by the fact that these people wore masks, not surgical ones but gas masks, and that they tried to hide their identity with hoods while ruthlessly beating citizens who were on the street.

As the night wore on, there was an increasing number of armed forces who used violence to disperse citizens. They also used cavalry, and armored vehicles were parked to break up demonstrations. The general impression of the protesters was that the police used an enormous amount of tear gas, which is why many citizens who were at the protest, but also those who live in nearby buildings, complained about health problems like headaches and nausea during the evening and the day after.

On the second day of the protest, 8th July 2020, an even larger number of people gathered on the streets, but also a huge number of armed forces, who had taken up positions in the wider city centre a few hours earlier, was also noticeable. Throughout the day, citizens shared footage of convoys of police vehicles coming into Belgrade from other cities. Public attention was attracted to the presence of a large number of men in Pionirski Park who refused to answer questions from journalists on their reasons for protesting, which raised suspicions that they were supporters of the ruling party.

The protests also spread to some other cities in Serbia, such as Novi Sad, Nis, Kragujevac, Smederevo and Krusevac. The evening of 8th July was also marked by numerous cases of police brutality. Members of the gendarmerie, the police brigade, and even the Special Anti-Terrorist Unit were deployed on the streets of Belgrade. After the quick and violent reaction from law enforcement agencies, masses of citizens gathered in front of the Assembly, but were pushed hundreds of metres away from the National Assembly. That evening, the worst case of police brutality was recorded, where a young man was hit with batons and kicked by dozens of policemen while lying on the ground. The young man is now in a serious condition.

On the second day, not only was there an increase in the number of uniformed police, but also those dressed in civilian clothes who claimed to work for the police. Citizens recorded numerous cases of police brutality:

During the evening, after the protest in Novi Sad, Miran Pogačar, an activist from the "Roof over the Head" initiative, who is one of the initiators of the Novi Sad protest, was arrested. Pogačar was the only one who officially addressed those present at Freedom Square, making demands on behalf of dissatisfied citizens, with constant calls for non-violence. However, police allege that he called for the destruction of public property.

During these two days of protest, journalists and media teams that reported from the scene had a particularly difficult job. They were constantly exposed to a huge amount of tear gas that interfered with their work and there were cases of violence against journalists and attempts to obstruct them from doing their jobs.

When it comes to media coverage of the protest, it should be noted that N1 television reported live during the entire duration of the protest, while Radio Television of Serbia largely ignored the existence of demonstrations on the streets of Belgrade.

The overall assessment of these two days of protest is that in too many cases a gross violation of authority took place by members of the police and that police reaction to the protests can be characterised as blatant police brutality. Despite numerous recordings and evidence, the director of the police, Vladimir Rebić, denied that there was an overstepping of authority, emphasising that "tear gas was fired as much as was necessary." This statement was followed by an address by the Minister of Police, Nebojša Stefanović, who stated that the protesters threw tear gas and that the police did not react even though they should have. According to unofficial data, in the two days of protest, hundreds of tear gas canisters were fired at assembled citizens. Stefanović also stated that the protests were not allowed and that they were organised for the purpose of a violent takeover of power, although according to the Law on Public Assemblies, spontaneous assembly of citizens without registration is allowed. The President of Serbia, Aleksandar Vučić, accused the protesters of being aggressive political extremists, announcing that the state would not give up and that all those who participated in the riots would be severely punished.

By 8th July 2020, over 30 citizens who had been tortured by the police contacted the Belgrade Centre for Human Rights (BCHR). Citizens continue to contact the centre and the Committee of Lawyers for Human Rights. Lawyers throughout Serbia are offering free legal aid to protesters through social media. On the other hand, the Ombudsman, Zoran Pasalic said that the police did not use excessive force, except in individual cases, and that there was no room for assessment of the systematic repression by police officers. This does not correspond with the numerous testimonies of citizens and journalists who were present during the protests.

In addition to the numerous reactions from state officials, non-governmental organisations, journalists and prominent individuals within the domestic sphere, the protests and violent reaction of the authorities have also attracted the attention of the international public. The New York Times published the news that the protests in Belgrade were the largest ever seen in connection with the coronavirus pandemic, but also that such violent reaction by the police has not been seen since the rule of Slobodan Milosevic. In reaction to the protests, the chair of the EU-Serbia Stabilisation and Association Parliamentary Committee, Tanja Fajon, also spoke about the brutality of the police, with the message that the health of citizens comes first, but that this must not be done by repression. The European Parliament (EP) Rapporteur for Serbia Vladimir Bilchik also condemned the violence used against protesters.

“I strongly condemn any violence that took place before the Serbian Parliament last night; violence against peaceful protesters and brutal tactics cannot be the answer when people exercise their right to assemble....The fight against the pandemic cannot be used as a political weapon," Bilcik said.

The group Socialists and Democrats in the European Parliament also spoke out, emphasising that President Aleksandar Vučić had ignored the safety of citizens for too long for personal political gain.

On the third evening (9th July 2020), the protests were much calmer, with fewer serious incidents, as a large number of citizens joined the "Sit, Don't be Provoked” campaign, which involved wearing white T-shirts and sitting on the streets to clearly highlight the difference between citizens and those suspected of provoking incidents in favour of the regime labelling the protests as violent. The most serious incident happened when a group of younger men wearing hoods tried to get closer to the National Assembly after citizens drove them away from the protest because they did not want to allow them to start any violence. On that occasion, while reporting from the scene, a journalist of the Nova.rs portal, Vojislav Milovancevic, was attacked and injured. According to him, one of the demonstrators attacked him and hit him on the head, most likely with a "boxer", after which his colleagues took him to the emergency centre, where he was given medical assistance.

In addition to Belgrade, on 9th July 2020 protests were held in other cities. Thousands of citizens gathered peacefully in Novi Sad demanding the resignations of Police Director Vladimir Rebic, Interior Minister Nebojsa Stefanovic, Novi Sad Mayor Milos Vucevic and Serbian President Aleksandar Vucic. A peaceful gathering was also held in Nis, where there was also noticeably less engagement with police forces, except for those deployed in front of the party premises of the Serbian Progressive Party. Thus far, it is reported that over 70 protesters have been detained during protests.