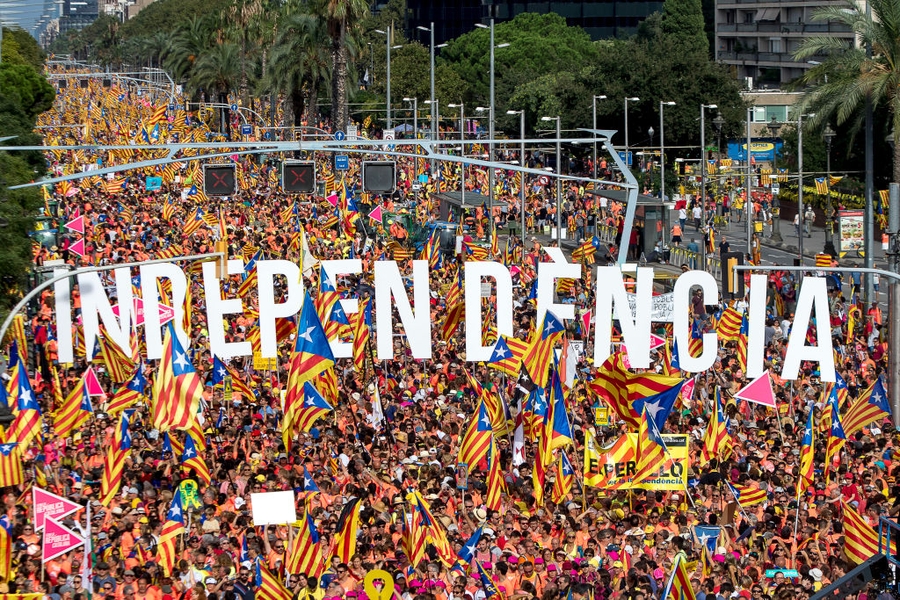 On 11th September 2018 millions took to the streets of Barcelona during the annual Diada celebrations calling for Catalonian independence and to demand the release of detained political prisoners. The "National Day" demonstration is the first since the 2017 independence referendum, that caused a political crisis in Spain. The demonstration was conducted peacefully and no incidents of violence were reported. However, tensions remain high between separatists activists and those who opposed independence. Independence supporters covered public spaces with yellow ribbons, symbols demanding freedom for Catalan political leaders jailed last year, but anti-separatists were quick to remove them. Separatists claim they should be allow to campaign as part of their free speech rights, however, others argue that public spaces should remain neutral.

The disagreement between the two groups, led to some violence. It was reported that woman was punched in the face for removing yellow ribbons from a park fence. In addition, during an anti-separatist march protesting against this assault a Telemadrid TV cameraman was hit several times on the head.

In a separate development, Willy Toledo, a Spanish actor and political activist, was arrested in September after he ignored two summons to appear in court. The actor was brought before a judge after spending a night in custody and later released. The case came about because of a complaint filed against him by a Christian lawyers association, who claims that Toledo insulted their religion in a 2017 Facebook post. Article 525 of Criminal Code sets out monetary fines for "those who offend the feelings of the members of a religious confession by publicly disparaging their dogmas, beliefs, rites or ceremonies".

As previously reported on the CIVICUS Monitor, in recent years the use of provisions like “spreading hatred”, “insulting the monarchy”, “glorifying terrorism” and “offending religious sentiments” continue to be used to undermine freedom of expression in Spain. One of the most known cases is that of rapper Valtònyc (Josep Miquel Arenas) who was sentenced to three and a half years in prison for his lyrics that praised terror groups and insulted the royal family as reported by the Monitor. The rapper subsequently fled the country. Most recently, on 17th September 2018 a court in Belgium refused to extradite him to Spain arguing that there is no equivalent in Belgian law for the crimes that the Spanish authorities prosecuted him for.

Separately, the Appeals Chamber of the National Court dismissed the appeal filed by rapper Pablo Hasel who was convicted to two years in prison for "glorifying terrorism". The Court however, reduced the prison sentence to 9 months as it considered that the rapper messages do not pose a "real risk" and therefore mitigating circumstances should have been taken into consideration. Similarly, the Appeals Chamber has reduced the jail term to 6 months for the musicians of La Insurgencia.

The Spanish government is currently considering reforming the criminal code to lower the penalties for “hate crimes” committed online.

Lydia Vicente Márquez, the executive director of Rights International Spain, an organisation that conducted an extensive campaign against the so called “gag law” – the one usually used by the authorities to curb freedom of expression in Spain, told the CIVICUS Monitor:

“Hate crimes were introduced in art. 510 of the Criminal Code in 2015. The definition is open and imprecise. Vaguely worded provisions leave wide discretionary powers, enabling excessively broad interpretations and are likely to lead to arbitrary use of power, which is against legal certainty. Broad and ambiguous provisions are incompatible with international standards for restrictions on freedom of expression. In such a way, this provision can interfere with legitimate expression. Restrictions on fundamental rights have to be legitimate, necessary and proportionate to achieving their aim."