Spain: Judicial proceedings against artists and a documentary filmmaker more 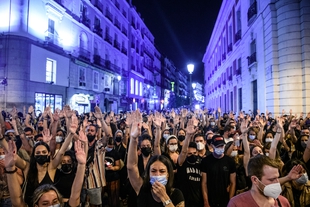 On 3rd May 2021, the headquarters of Cogam, a non-profit organisation that has been fighting for the equality of LGBTI people in Madrid was vandalised with transphobic graffiti messages opposing the Law on Sexual Diversity. On 11th June 2021, spontaneous protests were held across the country against gender-based violence after the body of a six-year-old girl named Olivia was found on the seabed of the Canary Island, Tenerife. Related to LGBTI rights, on , on 29th June 2021, the government however approved a draft bill that would have allowed legal gender recognition based on self-determination.

As is the case in many other European countries, Spain started to ease COVID-19 related restrictions as new COVID-19 infection numbers began to drop consistently. On 9th May 2021, the state of emergency ended. The nationwide nightly curfew is no longer in place, but different regions have specific measures in place depending on the severity of the pandemic in the given region.

On 3rd May 2021, the headquarters of Cogam, a non-profit organisation that has been fighting for the equality of LGBTI people for over 30 years in Madrid was vandalised with transphobic graffiti messages opposing the Law on Sexual Diversity. The law states that all people, regardless of their sexual orientation, sexual diversity or gender identity have the right to equal treatment before the law and the right to be protected against discrimination based on sexual orientation and gender identity. The graffiti included transphobic messages such as “reproductive exploiters" and " trans law is misogyny."

On 2nd June 2021, Spain's Constitutional Court confirmed the conviction of Jordi Cuixart, president of Òmnium Cultural, for sedition. Cuixart was prosecuted and sentenced to nine years in prison for his role in peaceful demonstrations in favour of the Catalan referendum in 2017. While the majority of magistrates confirmed the conviction, two magistrates provided a dissenting judgment, stating that the Supreme Court’s earlier ruling, which the Constitutional Court confirmed, “threatens to deteriorate democracy in Spain”. They added that peaceful assembly “should have been particularly protected in this case” considering that Cuixart is a civil society leader.

Since all legal avenues have been exhausted in Spain, Cuixart will now bring his case before the European Court of Human Rights on the grounds that his right to freedoms of peaceful assembly and expression were violated.

On 11th June 2021, spontaneous protests were held across the country against gender-based violence after the body of a six-year-old girl named Olivia was found on the seabed of the Canary Island, Tenerife. Olivia and her sister Anna has been missing since April 2021, and it is suspected they were killed by their father. Around 800 people protested in Santa Cruz, Tenerife the majority of whom were young women. In Madrid, about 2,000 people attended the protest and in Valencia over a thousand people showed up to protest. Protestors chanted: “We’re not dying, they’re killing us.” Marta Carramiñana, a member of the Madrid Feminist Movement and the 8-M women’s day movement, said:

“We need feminist education from an early age to combat this violence, because these men aren’t crazy or sick, they are healthy children of the patriarchy.”

While the protest was triggered by the outrage over finding Olivia’s body, the protests were likely to have been sparked by the increased violence against women in general. In the week of 17th May 2021, five women were killed by their partners, one of whom was pregnant. According to the Guardian, since lockdown restrictions were eased, more femicides by current or former partners have been reported. The Guardian reports that this may very likely be linked to women trying to escape abusive situations after months of lockdown.

On 13th June 2021, thousands of Spaniards took to the streets in Madrid to protest the government's plans to pardon 12 Catalan politicians, who promoted a failed bid for Catalonian independence in 2017. The protest was attended by the heads of the conservative Popular Party (PP), far-right VOX party and the liberal Ciudadanos (Cs). Indications of the pardons made by Prime Minister Pedro Sanchez divided Spain into those who see them as a necessary step to improve relations with the region and those who see it as concessions to separatists who will continue seeking independence. The government sees the pardons as a bid to seek a solution to the ongoing Catalan crisis. No altercations or misconduct by the police were reported.

On 21stJune 2021, 100 climate activists from Rebelión por el Clima blocked the entrance to the Repsol research center in Móstoles, to condemn the oil company’s responsibility in the climate crisis, calling for it to cease its fossil fuel activities as soon as possible, and no later than 2040. In a statement, the group said that 30 activists were arrested during the action.

On 18th May 2021, Spain's Congress of Deputies rejected a landmark legislative proposal that would have allowed legal gender recognition based on self-determination. The current process for changing gender markers on official documents is daunting for transgender people and does not recognise non-binary people. Transgender people can only change their gender on official documents if they have officially been diagnosed with gender dysphoria and have undergone at least two years of medical treatment to “adjust” their physical appearance to the gender with which they seek to identify. The proposed reform would have removed the requirement of medical evidence and would have allowed for non-binary gender markers on official documents. Additionally, it would have upheld the self-determination of children as the law would have granted children and adolescents access to legal gender recognition. According to the World Professional Association for Transgender Health, medical barriers for transgender people to gender recognition may cause harm to their physical and mental health insofar as some transgender people might turn to substance abuse or even suicide. Christian González Cabrera, researcher at Human Rights Watch condemned the status quo in Spain.

“Spain’s current procedure for legal gender recognition is onerous, inadequate, and out of tune with advances on gender identity in Europe and beyond.”

Later, on 29th June 2021, the government however approved a draft bill which would allow anyone over the age of 14, with the consent of a legal representative, to legally change their gender without medical proof and hormone therapy. However, those under the age of 14 would require judicial authorisation to legally change their gender. If the law passes through parliament, transgender people would be able to declare their gender by filing a form at a registry office and then confirm it three months later. However, some activists point out that the bill does not address the problems non-binary people face, with some feminist organisations opposing the bill.

As reported by Mapping Media Freedom, on 28th April 2021, the entrance of the editorial offices of the monthly local newspaper El Mirall (The Mirror) in Barcelona was vandalised. Unidentified individuals wrote messages such as “dirty with lies” and threw orange paint around the entrance of the building. El Mirall is a free newspaper supported by the government of Catalonia.

As reported by Mapping Media Freedom, on 6th July 2021, the far-right Vox Party made a “veiled” threat against satirical magazine El Jueves, via Twitter, after it published several fiercely critical cartoons mocking the party’s leadership. The account published a photo of Ricardo Rodrigo Amar, who is head of the RBA editorial group that publishes El Jueves, claiming that his outlet publishes “hatred against millions of Spaniards on a daily basis”. It then called on people to express their anger at Rodrigo, referring to the city and street location of the magazine.

The right to freedom of peaceful assembly is enshrined in Article 21 of the Spanish Constitution which explicitly states that the exercise of this right does not require authorisation, but that the authorities should be notified in advance of assemblies taking place in public areas.

The right to freedom of peaceful assembly is enshrined in Article 21 of the Spanish Constitution which explicitly states that the exercise of this right does not require authorisation, but that the authorities should be notified in advance of assemblies taking place in public areas. The Organic Act No. 9/1983, establish a prior notification period of 10 days, and 24-hour notification only in exceptional circumstances. However, the legislation does not explicitly allow spontaneous demonstrations. Other, more recent legal instruments unduly restrict the right. The Basic Law for the Protection of Public Security, which entered into force in March 2015, imposes time and place limitations and penalises spontaneous demonstrations. The law also introduces new offences and includes disproportionate penalties including fines of up to €600,000 for not declaring gatherings at facilities that provide basic community services. Previously, in 2013, the Ministry of the Interior issued a circular that restricts gatherings within 300 metres of the houses of public officials and politicians. Since 2011, the number of protests has substantially increased in Spain due to a declining economy and regressive social measures. During those protests, the media and civil society organisations reported cases where excessive force and arrests were used by the police to quell demonstrations. Allegations were also made that police had ill-treated protestors while they were in detention.