Police charged for unjustified use of violence, as Romanian politicians blame protestors more 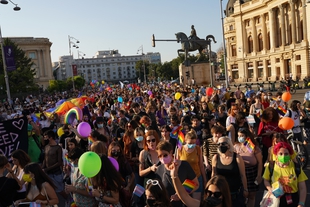 On 15th February 2022, after 23 years of operation, the entire editorial staff of the Hungarian minority media platform Transindex in Romania resigned, on grounds of facing suffocating political pressure on their journalistic work. Following this it was reported that the staff of Transindex would be launching a new media project with the Hungarian independent news outlet Telex, named Transtelex. Separately, several attacks against journalists were documented, including against journalist Emilia Sercan who filed a police report after being threatened online and discovering that old private photographs had been stolen from her hard drive and put on porn sites. In another concerning development, the Romanian Senate, the parliament’s upper house, approved an anti-LGBTQI+ legislative draft which mirrors Hungary's law on on disseminating LGBTQI+-related information.

According toUNHCR figures dated 29th May 2022, since the start of Russia’s invasion of Ukraine in February 2022, 6.8 million people left Ukraine. The vast majority travelled to Poland (3.6 million), while Romania has seen the second-largest influx with close to a million refugees arriving in the country. Of the people who left Ukraine, only about 9% of the arriving refugees decided to stay. The country has been generally welcoming to Ukrainian refugees.

An April 2022, a report by the European Implementation Network (EIN) and Democracy Reporting International (DRI) found that Romania has one of the worst judgment implementation records of the European Court of Human Rights (ECtHR) and the Court of Justice of the European Union (CJEU). Authorities EU-wide have failed to implement 37.5% of the ECtHR judgments from the last ten years. According to the report, 57% of the leading judgments handed down by the ECtHR against Romania over the past ten years are still not fully implemented. Georgiana Gheorghe, Executive Director of the Association for the Defence of Human Rights in Romania - the Helsinki Committee (APADOR-CH) said:

“Twenty-eight years after the ratification of the European Convention for Human Rights, it’s time we start by recognising openly that we do have a problem with the implementation of important ECtHR judgments which highlight systemic human rights violations. And we have to inquire why. We need to better explain to people - whose hopes for their rights lie with the European Court primarily (and not with the state! )- what implementation means, how it can be done to avoid future violations of rights and how each one of us can be part of the process, be it as organised civil society or mere citizens.”

The European Court of Human Rights (ECtHR) has handed down its verdict in the case of Bumbes v. Romania. In August 2013, activist Mihai Bumbes was fined and handcuffed during a protest. He and three others were protesting against mining operations in Roșia Montană. The four were quickly arrested and taken to a police station. The police first accused them of holding an unauthorised protest and then fined them for hooliganism. In September 2013, Mihai Bumbes challenged the fine in court. His appeals were rejected by domestic courts. In its judgment published on 3rd May 2022, the ECtHR found that domestic courts did not seek to strike a balance between the requirements of freedom of assembly and respect for the right to expression and the need to maintain public order, but concentrated only on the fact that Romanian law required that protesters notify the authorities in advance. The court concluded that the fine imposed on the protesters, although not large, had a discouraging effect on public discourse, and the interference with the applicant's right to freedom of expression was not "necessary in a democratic society”.

On 15th February 2022, after 23 years of operation, the entire editorial staff of the Hungarian minority media platform Transindex in Romania resigned, on grounds of facing suffocating political pressure on their journalistic work. In their statement, the journalists said:

“We have all noticed that the space for freedom of expression and publicity in Transylvanian Hungary has become increasingly restricted in recent times. For almost two years, we have been struggling for our survival in a politically-determined environment in which the press can only choose between two paths: either it capitulates and continues to function as a virtual mouthpiece for various political interests, or it tries to do its job, but in this case, risks being impossible. We have chosen the latter path and are now packing our bags because we have no choice.”

Following this it was reported that the staff of Transindex would be launching a new media project with the Hungarian independent news outlet Telex, named Transtelex. Telex was formed in 2020 from the former editorial staff of Index, who resigned citing interference by government-linked figures.

The Romanian government is preparing an IT platform that will scan online press for misinformation and disinformation. Concerningly, according to profit.ro, in order to qualify as possibly spreading Russian propaganda, it is enough to associate the government or its officials with “corruption” or “incompetence” in a blogpost or an online article. The Romanian Helsinki Committee, APADOR-CH, strongly criticised the plans to set up a platform that will monitor the Internet and called attention to the dangers of censorship.


Change in parliamentary rules a concern for transparency

On 9th February 2022, following a violent clash between two MPs, the ruling coalition changed parliamentary rules so that MPs are now allowed to broadcast or record video record from the area allocated to the parliamentary group to which they belong. Those who violate the new provisions will be evicted from the hall and will face decreased allowances. Additionally, meetings of the Committees of the Chamber of Deputies may only be broadcast live or recorded by the media with prior approval. Six NGOs spoke out against the change, arguing that it greatly decreases transparency in the government. In their view:

“over time, live meetings during public meetings, in public institutions, have been a source of information and have often led to increased transparency of institutions and sometimes even to the accountability of the elected. ”

On 17th February 2022, journalist Emilia Sercan filed a police report after being threatened online and discovering that old private photographs had been stolen from her hard drive and put on porn sites. The screenshots, which she filed with the police report, were then leaked all over the internet, which she believes was done by investigators to target her. It took several weeks for the filing to process from the police department, which Sercan claims was an intentional delay by both the police and the prosecutor’s office, to which the complaint was sent by the police after several weeks. Sercan has faced threats and intimidation many times since 2016, usually for uncovering fraudulent doctoral dissertations among Romanian officials, including the Prime Minister. The Committee to Protect Journalists (CPJ) has called upon Bucharest to investigate Sercan’s claims about the most recent case of intimidation attempts against her. Media Freedom Rapid Response (MFRR) and partner organisations also called for swift and independent investigations into the leaks and the previous threats against Șercan.

#Romania: #CFWIJ condemns the vicious #OnlineAttacks on @emiliasercan and extends support. The blatant targeting of the journalist after she reported on plagiarism by PM #NicolaeCiucă and online and offline threats to her safety must be swiftly investigated. pic.twitter.com/5h3axswWti

Separately, on 13th April 2022, Cristian Pantazi, the editor of Romanian news website G4media.ro, reported that he faced intimidation after publishing an article the month before criticising conspiracy theories which were spread on social media about Russia’s invasion of Ukraine by a professor at the country’s state military academy. Following this, an employee of the academy contacted the editor’s wife and told her to stop her husband from publishing such content. The employee later apologised.

The Romanian Senate, the parliament’s upper house,approved a legislative draft that “aims to prohibit the dissemination by any means of content regarding deviation from the sex and gender assigned at birth, or the glorification of gender reassignment and homosexuality”. The legislative proposal, resembling Hungary’s law on disseminating LGBTQI+-related information, was pushed by the Alliance for Uniting Romanians (AUR) and the Democratic Alliance of Hungarians in Romania (UDMR). Activists and human rights organisations immediately condemned the bill, calling for the parliament’s lower house to reject it.

“Romania must avoid the illiberal drift promoted by Hungary through such measures which were received harshly by the European Union. Adopting explicitly homophobic and transphobic legislation by censoring information about sexual orientation and gender identity is a shame on Romania. The lower house must vote to stop this incitement to discrimination.” - LGBTQI+ rights group ACCEPT stated.

Amid a rise in official anti-LGBTI sentiment in #Bulgaria🇧🇬 and #Romania🇷🇴, both countries are now not far off the lowest ranking in the #EU🇪🇺, which currently belongs to #Poland🇵🇱. pic.twitter.com/WmD7q8JAxj