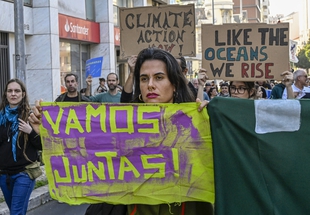 On 12th November 2022, hundreds of protesters took to the streets of Lisbon against the climate crisis, and dozens of young climate activists stormed a building where Portugal's Economy Minister Antonio Costa e Silva was speaking, demanding that the former oil executive resign. Five activists were detained by police. 2nd January 2022, the websites of Impresa media outlets, newspaper Expresso and all channels of the SIC TV station faced a cyberattack which demanded ransom- regarded as one of the largest cybersecurity incidents in Portugal’s history.

On 30th January 2022, snap general elections were held in Portugal. Incumbent socialist Prime Minister Antonio Costa secured an outright majority of seats in the new parliament, leading his third government. The new government took office in March 2022, including 17 ministers and 59 secretaries of State.

On 10th November 2022, the newly-appointed secretary of State Miguel Alves stepped down from his role after being formally charged with malfeasance in relation to events that took place in 2015 and 2016 when he was the mayor of the northern Portuguese municipality of Caminha.

The government announced the start of the consultation process at the end of July 2022. Consultations were scheduled to stay open until the end of August 2022, during the parliamentary recess. Plataforma Portuguesa das ONGD (Plataforma), the biggest network of Portuguese NGOs, was concerned that the summer break period would discourage organisations from participating and successfully requested an extension of the consultation deadline until the end of September, to allow for greater participation despite the summer break.

Over the past two years, Plataforma and its member organisations have been working in depth on this topic and published a position paper "Vision of the Portuguese NGO Platform on the future of Portuguese Cooperation", seeking to ensure that the proposals formulated by it are integrated into the ECP 2030, in order to enhance Portugal's contribution to the construction of a fair, equitable and sustainable world.

Some of the key recommendations put forward by Portuguese civil society for the ECP 2030 are to ensure the promotion of gender equality and the fight against the effects of the ecological crisis. They advocate for more transparency and involvement of local communities and for a stronger role of civil society organisations as a partner to implement cooperation policies, including through participatory methodology.

The final draft of the strategy will be released in the following weeks. Plataforma is hoping that an action plan will soon follow to clarify the operational priorities of the strategy.

The climate movement in Portugal continues to demand greater engagement of the government in the fight against climate change. High school and university students have been occupying schools and campuses to protest government inaction.

On 12thNovember 2022, hundreds of protesters took to the streets of Lisbon against the climate crisis, and dozens of young climate activists stormed a building where Portugal's Economy Minister Antonio Costa e Silva was speaking, demanding that the former oil executive resign.

Consequently, five activists were detained by police. To show solidarity with the arrested, who appeared in front of a judge on 16th November, dozens of students staged a sit-in in front of the Ministry of Economy and the police station where the five were transferred.

According to Transparency International (TI) Portugal, the Portuguese regime governing access to administrative and environmental information and the re-use of administrative documents (Access to Information Law) continues to present shortcomings. If a certain public entity fails to comply with the law or simply denies access to certain documents, NGOs and/or citizens can make a complaint to the Commission for Access to Administrative Documents (CADA). However, CADA's opinions are not yet binding. This means that even if this Commission considers that the complaints presented are well founded and that the information must be made available, the requested entities can simply ignore its opinions.In this case, the only thing left for citizens to do is to file an administrative action in court, which entails financial burdens.