Peru: serious decline in freedom of expression and the press more

Peru legislation enables disproportionate use of force by police more 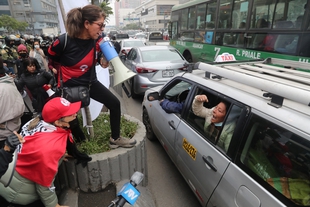 On 8th July 2022, a group of presumed government supporters attacked journalists who were waiting outside the Public Prosecutor’s Office to cover a hearing in a case involving President Pedro Castillo’s family. The assailants began chasing and insulting the journalists, calling them “sold out press” and “trash.”

Attacks and harassment against the press by authorities and their supporters

#Peru🇵🇪: The president threatened journalists with legal action, adding to a long record of judicial processes against media workers. We support @ANP_periodistas' concerns about the systematic use of justice to criminalise journalistic work. @FIP_AL https://t.co/moplMcliMl

On 8th July 2022, a group of presumed government supporters attacked journalists who were waiting outside the Public Prosecutor’s Office to cover a hearing in a case involving President Pedro Castillo’s family. The assailants began chasing and insulting the journalists, calling them “sold out press” and “trash.” Canal N camera operator Carlos Cruz and technician Carlos Olmedo were pushed and shoved as they attempted to record the First Lady leaving the Public Prosecutor’s Office.

On 31st July 2022, President Castillo threatened to sue Sunday news programme Panorama for allegedly broadcasting “false news aimed at misleading and manipulating the public.” Castillo was reacting to Panorama’s report on an accusation made by a former employee of the presidency, who alleged the president had received a bribe in exchange for naming an executive to state-owned oil company Petroperú. The Peruvian Press Council (CPP) and the National Radio and Television Society (SNRTV) issued a statement rejecting the president’s threats against Panorama, and saying that Castillo had stigmatised the press in recent addresses to the nation.

On 10th August 2022, newspaper La República correspondent Elmer Mamani was verbally and physically assaulted by a security guard at the headquarters of Arequipa’s regional government. This incident took place in the context of increasingly hostile behaviour toward La República’s journalists, following reports published in the newspaper about alleged corruption in the regional government. A similar incident took place days later.

On 24th August 2022, Canal N journalist Lourdes Páucar and camera operator César Taramona were attacked by supporters of a public official arrested in Lima on charges of leading a criminal organisation. They were in front of the official’s home to cover his arrest when a group began to insult and throw stones at them.

In a similar incident on 26th August, Radio Exitosa reporter Cari Saldaña was assaulted by supporters of president Pedro Castillo. The journalist was outside the court where a trial involving the president’s family was taking place, where she was covering protests and counter-protests regarding the legal proceedings. A group attacked Saldaña and attempted to take away her equipment to stop her from recording. The reporter said police was nearby but did not act to stop the assault.

On 9th September, journalists German Ollachica Cruz and Martín Sanca Pampa, hosts of the programme Sin mordaza on Radio Visión La Joya, were attacked while broadcasting their programme live in Arequipa. The journalists were commenting on the case of a public official who was accused of sexual assault, when the official’s brother entered the radio cabin unexpectedly. He insulted the journalists, punched Ollachica Cruz and then assaulted Sanca Pampa.

On 16th September 2022, the news programme D-Bate Noticias of Piura TV Canal received an injunction issued by a Piura provincial prosecutor, compelling the news outlet to reveal their source for an October 2021 report on corruption allegations involving a local government official. Several press organisations spoke out against this request by the Public Prosecutor’s Office, calling it an intimidation attempt against journalists in the province.

On 29th June 2022, Prensa Callao TV reporter Jhonatan Alexis Montoya Hurtado was harassed by police officers and attacked by private individuals while covering an incident in the La Perla district of Callao province. The journalist was filming as police stopped a car driving on the wrong side of the road. An officer approached him to question what he was doing. There was a discussion between the reporter and the police officer, during which the driver who had been stopped also insulted and threatened the reporter. According to the National Association of Journalists (ANP), the police officers eventually left and the driver, along with two others, began attacking Montoya Hurtado.

On 6th July 2022, a journalist and camera operator for América Televisión’s programme Cuarto Poder were detained for several hours by members of campesino patrols (“rondas”) in Chadí, Cajamarca. Eduardo Quispe and Elmer Valdivieso were reporting from a local community when residents claimed they had entered without permission and questioned their recent reports on corruption allegations involving President Pedro Castillo’s family. The journalists were allowed to leave after reading a statement in favour of the patrols live on television. Peruvian press associations CPP, IPYS and the ANP published an open letter calling for a prompt investigation into this incident and requesting a meeting with the Attorney General to discuss their concerns.

On 2nd September 2022, a news team with Talara TV Noticias faced police abuse, harassment and detention when covering a neighbourhood protest against land trafficking in the district of La Brea, province of Talara, Piura. Franklin León Requena and Marlene Carazas Medina were transmitting live from the protest, conducting interviews and taking photographs, when the police began to intervene to disperse the demonstrators. A police officer allegedly pushed Requena to the ground after an altercation ensued when the journalists refused to allow police to take their ID documents to the police station for filing. They were taken to the station, held overnight and told they had been detained for resistance and contempt of authority.

On 13th September 2022, two people on a motorcycle threw an explosive device at the entrance of television station Cadena Sur TV Canal 15 in the city of Ica. The explosive, which appeared to be a stick of dynamite, destroyed the door to the building. According to the Committee to Protect Journalists (CPJ), this was the latest in a string of incidents targeting Cadena Sur director Gastón Medina and the television station. Medina told CPJ he believes the attacks were in retaliation for the station’s reporting on alleged corruption involving the Ica department governor. Local press groups such as the ANP and the Institute for Press and Society (IPYS) expressed concern about the attacks and demanded a thorough investigation into these threats.

#Peru🇵🇪: We support our affiliate @ANP_periodistas in rejecting the bill that seeks to impose prison sentences in cases of defamation. Far from discouraging #disinformation, this kind of legislation only serves to facilitate the persecution of journalists. @FIP_AL https://t.co/CkNt26jFlt

On 6th July 2022, the government presented a bill (2508/2021) which would criminalise the dissemination of classified information regarding ongoing criminal investigations. The bill proposed modifying the Penal Code to sanction with jail time any party who disseminates reserved information about criminal investigations. The draft explicitly enables the punishment of lawyers, plaintiffs, defendants, judges, prosecutors and police officers, among others, who might have access and share such information. Harsher penalties would be imposed if the information is disseminated in the media. On 8th July 2022, the bill was forwarded to the Peruvian Congress’ Justice and Human Rights Commission for analysis.

The International Federation of Journalists expressed concern, saying the bill puts press freedom at risk by potentially restricting the confidentiality of journalistic sources. Peruvian press organisations condemned the initiative, calling it a “gag law.” IPYS said in a statement that the bill would limit debate on matters of public interest such as investigations involving public officials. The group evaluated “that it is a proposal aimed at silencing the discussion of facts that compromise the President of the Republic, ministers, other high-ranking officials and politicians in general.” The CPP called on Congress to archive the bill, arguing that it could put journalists at risk if they are considered “instigators” of or “accomplices” to this type of offence.

On a separate but related note, on 18th August 2022, congressman Segundo Montalvo with government party Peru Libre introduced a bill (02862/2022) which would increase penalties for defamation, slander and the “improper use of media, social networks or collective dissemination websites.” The initiative proposes modifying the Penal Code to increase fines and jail terms for these offences. ANP condemned this bill, underscoring that it contravenes international jurisprudence which recommends the decriminalisation of defamation. The association said the bill is particularly concerning in the Peruvian context “given the high rate of judicial harassment of journalists, especially independent or investigative journalists, who are recurrently taken to court because of their work.” In that regard, ANP said the bill aims to silence journalistic criticism with the threat of imprisonment.

On 2nd August 2022, Awajún Indigenous leader Genaro Comisario Bitap was shot and killed in Datem del Marañón, Loreto department. He was president of a local “Defence Front” (Frente de Defensa del Distrito de Manseriche) in the Peruvian Amazon, working in the defence of territories and Indigenous populations against illegal mining, logging and narcotrafficking. The Public Prosecutor’s Office issued a statement saying they had opened an investigation into the murder.

Threats and attacks on Indigenous defenders in Cenepa river basin

On 17th July 2022, people linked to illegal mining in Amazonas attacked the headquarters of the Organisation for the Development of the Cenepa Border Communities (Odecofroc), an Indigenous organisation whose leaders have opposed mining in the Cenepa river basin. About 600 people had been involved in the invasion of the offices, which took place while a community meeting was being held with Odecofroc council members, representatives of local government and a representative of the Autonomous Awajún Government. According to Servindi, the attackers damaged telecommunication antennae, leaving the leaders without means of communication.

On 26th October 2022, armed assailants burned and ransacked Odecofroc headquarters. Odecofroc leaders were able to flee the area during the attack, but received threats afterwards. This violence followed action by Odecofroc to block illegal miners’ passage through the Cenepa river. The National Human Rights Coordinator (CNDDHH) expressed indignation at the authorities’ lack of action after being warned about threats of attacks against the organisation. On 27th October, the Ministry of Culture issued a statement saying authorities were coordinating actions to address conflict in the region and to ensure the support of the protection mechanism for human rights defenders for those under threat.

At the end of August 2022, hundreds of people in Espinar joined a strike against mining company Glencore Antapaccay to demand a re-negotiation of the company’s agreements with local populations. The protesters expressed dissatisfaction with projects conducted within the agreement’s framework, saying they lacked sustainability and accountability. On 25th August 2022, the police detained leaders of the Espinar Comité de lucha (“Struggle Committee”) after protesters blocked the southern mining corridor in Condoroma. There were reports of police officers repressing protesters in front of the Espinar provincial municipality building in Yauri.