Protests in Japan around death in immigration detention, arrest of anti-Olympics activist more

Opposition against Olympics continues, as state of emergency extended in Japan more 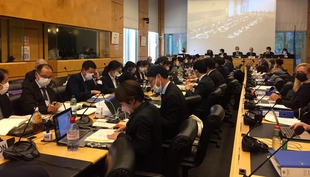 Since September 2022, there have been concerns about threats against foreign journalists by right wing groups. The UN Human Rights Committee has raised concerns around laws restricting press freedom, especially the Designated Secrets Protection Act as well as about protest restrictions and excessive force used by the police.

The state of civic space in Japan is rated ‘narrowed’ by the CIVICUS Monitor. Restrictions on press freedom and censorship as well as discrimination against the LGBTQI+ community have been documented. The government has also imposed tougher penalties for criminal defamation.

In September 2022, the government’s inter-ministerial committee on business and human rights, compiled a document titled “Guidelines on Respecting Human Rights in Responsible Supply Chains”. The guidelines are designed to create a system that helps businesses set policies for fulfilling their responsibilities to respect human rights and take corrective measures when problems arise. However, civil society groups said the guidelines remained weak and that written comments they had provided on the draft guidelines were ignored.

Japan’s implementation of its obligations in the International Covenant on Civil and Political Rights (ICCPR) was reviewed by the UN Human Rights Committee on 13th and 14th October 2022. In its concluding observations, published on 30th November, the Committee noted the lack of clear progress towards establishing a national human rights institution in accordance with the principles relating to the status of national institutions for the promotion and protection of human rights (the Paris Principles).

In recent months, there have been concerns about threats against foreign journalists by right wing groups. The UN Human Rights Committee has raised concerns around laws restricting press freedom, especially the Designated Secrets Protection Act as well as about protest restrictions and excessive force used by the police.

This isn't unheard of

In this fascinating piece, @robertwhiting_ tells the history of media intimidation in Japan --and towards
the FCCJ https://t.co/Lo78JhrBRq

In December 2022, a caller made a series of threatening phone calls in English and Japanese to the Foreign Correspondents’ Club of Japan (FCCJ). Threatening to blow up the FCCJ and to harm two journalist members, the caller accused foreign journalists of being “anti-Japanese.”

One of those threatened was Jake Adelstein (author of Tokyo Vice, host of the podcast series The Evaporated and sometime contributor to the Asia Times). The other journalist who was targeted requested not to be named in the news media.

According to the FCCJ President, Peter Elstrom, the police were able to trace the calls quickly and arrested the person who had made the threats. The caller turned out to be a woman with nationalist and extreme right wing views. She was detained for about two weeks and then released after paying a fine and writing a letter of apology. He added that the incident was just the most recent in a series of assaults on the FCCJ dating back decades.

The Designated Secrets Protection Act was passed in 2013. The law increases penalties for unauthorised disclosure of “specially designated secrets” from five to ten years’ imprisonment, and expands both the definition of information that may be designated as secret, and the number of officials with discretion to make this designation. It also permits criminal penalties for journalists and others who merely publish secrets obtained from others.

The UN Human Rights Committee, in its concluding observations, raised concerns “regarding the broad definition of information that can be classified as secret and the general preconditions for classification under the Act. While it notes the information provided by the State party that no broadcasting licences have been suspended to date, the Committee is concerned that the high criminal penalties set out in the Act on the Protection of Specially Designated Secrets, and the sweeping powers granted to the government under the Broadcasting Act and the Radio Act to suspend operations of broadcasters, are generating a chilling effect on the activities of journalists and human rights defenders and leading to self-censorship”.

The Committee recommended “narrowly defining the categories of information that could be classified as secret and guaranteeing that any restriction of the right to seek, receive and impart information complies with the principles of legality, proportionality and necessity in order to prevent a specific and identifiable threat to national security, and that no individual is punished for disseminating information of legitimate public interest that does not harm national security.”

The Committee also called on the government to “ensure the independence of the broadcasting and licensing authorities and the effective protection of independent journalists and media workers against any form of intimidation and refrain from using civil and criminal provisions, including the provisions on extremism and other regulations, as a tool to supress critical reporting on matters of public interest."

There are frequent reports of peaceful protests in Japan, most recently calling for the cancellation of a state funeral for former Japanese Prime Minister Shinzo Abe, by students and trade unionists protesting Japan’s “growing militarisation” and in solidarity with China's anti-lockdown protests.

At the same time, the UN Human Rights Committee also raised concerns - based on reports from civil society - about the “unjustifiable and disproportionate restrictions by law enforcement officers on protests and demonstrations, including excessive use of force and recording of protesters, particularly on protests against the Diet and protests in Okinawa, and arrests of protesters and journalists.”

The CIVICUS Monitor has documented the criminalisation and surveillance of protesters in Okinawa that have been opposing the U.S. military bases as well as a raid on the home of an anti-Olympics protester.

The Committee called on the government to “ensure that all allegations of excessive use of force and arbitrary arrest and detention by law enforcement officials during peaceful assemblies are investigated” and “ensure the protection of peaceful demonstrators, human rights defenders and journalists covering peaceful demonstrations from threats, intimidation, harassment and attacks by private actors.”