Worrying number of attacks on the press by Querdenker demonstrators more

Freedom of expression under the spotlight - yet again more

Protest against neo-Nazi demonstration in German city of Kassel more

People take to the streets ahead of EU elections more 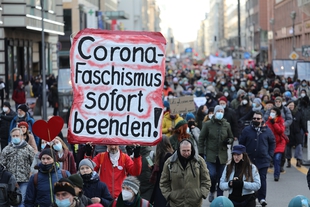 In its World Press Freedom Index, Reporters Without Borders (RSF) once again noted a decline in press freedom in Germany, which dropped from 13th place to 16th, attributing this to the ongoing attacks on journalists. For example, during the reporting period, journalists from the photo and video documentation platform La Vue Critique were the target of multiple episodes of violence and harassment by Querdenker and Neonazi protesters.

On 23rdApril 2022, about 2,000 people gathered to protest against plans to bulldoze a village in Western Germany for the purposes of expanding a coal mine (operated by RWE). In a bid to halt the expansion, some activists have occupied the village by building tree houses.

In its World Press Freedom Index, Reporters Without Borders (RSF) once again noted a decline in press freedom in Germany, which dropped from 13th place to 16th, attributing this to the ongoing attacks on journalists.

On 21st January 2022 real estate company United Capital RE GmbH withdrew its legal action against Luhze e.V., a nonprofit that runs Leipzig students’ newspaper “luhze”. The legal action was initiated earlier in January and was based on a report about the company's business model published by the newspaper in December 2021. United Capital asked the newspaper to remove the article as it claimed it “spread numerous untrue factual allegations.” The law firm representing the company also billed the newspaper more than 2,000 Euros for their letter of formal notice. The newspaper said the lawsuit threatened its financial existence. As a consequence of withdrawing the lawsuit, United Capital is obliged to cover all costs resulting from the court case.

Several attacks on journalists by Querdenker and Nazi demonstrators

At the beginning of 2022, journalists from the photo and video documentation platform La Vue Critique were the target of multiple episodes of violence and harassment by Querdenker and Neonazi protesters.

Penalty order issued to journalist for alleged trespassing while reporting

On 11th January 2022, freelance photojournalist Michael Trammer received a penalty order for alleged trespassing. The penalty order refers to the events that occurred on 11th September 2021 during the protest against the International Motor Show (IAA), in Munich. The freelance photojournalist followed a group of protesters who were squatting in a building, while covering the events for the daily newspaper taz. Trammer, who was held in custody at the time, declared that he would lodge an objection and that the freedom of press prevails over trespassing as public interest justified the action. Furthermore, he added that the penalty order failed to mention the fact that he trespassed while working as a journalist.

On 15th January 2022, the deputy of the National Democratic Party of Germany (NPD) Ingo Helge attacked a journalist who was covering a Querdenker demonstration against mandatory vaccination and COVID-19 measures in the Hessian town Herborn. The journalist asked the deputy about a flag, who responded by hitting the journalist with his tripod, leading to a minor injury. The journalist filed a report with the police.

On 21st February 2022, freelance journalist and photographer Marco Kemp was pushed and his camera equipment damaged by a police officer in Göttingen. The journalist, who was reporting on a Querdenker demonstration, said that the police officer simply left after the episode. The incident took place when the police were trying to cut off a group of anti-fascist demonstrators who were approaching the Querdenker protesters in a counter demonstration.

On 25th February 2022 the Funke media group came under cyberattack. The websites of the twelve media group's magazines and daily newspapers were targeted by the attack. The Frankfurter Rundschau, which belongs to the Ippen Media network, also registered problems specifically in the social media area. In fact, the news website's editor-in-chief reported that the Frankfurter Rundschau's social media pages were flooded with pro-Putin trolls and bots. However, it cannot be confirmed that Russian hackers or bots are responsible for the attacks.

On 22nd March 2022, the German public TV broadcaster Zweites Deutsches Fernsehen (ZDF) was refused accreditation for reporting on the opening ceremony of the Tesla plant in Brandenburg, the most important industrial project in Eastern Germany. The German Chancellor Olaf Scholz participated in the event. The TV broadcaster was informed the night before the ceremony that it would not receive accreditation "due to earlier reporting by the investigative magazine Frontal 21", which caused the broadcaster to lose the “trust” of the company. ZDF could report only from outside the ceremony venue.

Hendrik Zörner, the German Association of Journalists’ (DJV) press spokesman commented that the role of the press is to investigate and produce critical reports and criticised Tesla's approach to journalists. He also added that these kinds of episodes are not rare in the country.

“What is the understanding of press freedom that the US company is showing? Critical, journalistic reporting is the job of the media and must not lead to exclusion from the opening ceremony. At press events, the same law must apply to everyone. Anyone who wants to report journalistically must also be given the opportunity to do so.”

Attacks on journalists at pro-Palestinian protest