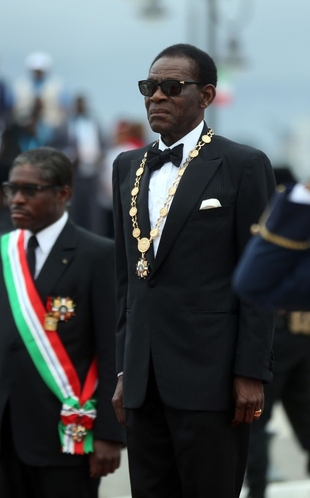 On 15th March 2019, human rights activist and the Vice President of the CSO El Centro de Estudios e Iniciativas para el Desarrollo (CEID; Center of Studies and Initiatives for Development) Alfredo Okenve was prevented from receiving an award from the French and German embassies for his human rights work. On the morning of 15th March 2019, police officers arrested and interrogated Okenve's cousin, Joaquín Mangué Obama, on the whereabouts of Okenve in Malabo

Prominent #EquatorialGuinea-n human rights activist, Alfredo Okenve, has been banned from receiving Franco-German prize. He was sent back home handcuffed and put on a military plane. We call the authorities to guarantee his safety and freedom of movement.https://t.co/Kx8BYqT3Lb

On 15th March 2019, human rights activist and the Vice President of the CSO El Centro de Estudios e Iniciativas para el Desarrollo (CEID; Center of Studies and Initiatives for Development) Alfredo Okenve was prevented from receiving an award for his human rights work from the French and German embassies in the country's capital Malabo. In the morning of 15th March 2019, the day of the award ceremony, police officers arrested Okenve's cousin, Joaquín Mangué Obama, and interrogated him on the whereabouts of Okenve in Malabo. Alerted by this news, the embassies cancelled the award ceremony, and according to CEID, Okenve sought refuge at the French embassy, while changing the date of his flight to Madrid to 15th March. He originally planned to travel to Madrid on 18th March for medical examinations as a result of the injuries he sustained in October 2018 (see below).  Security forces detained Okenve at passport control of the Malabo airport, handcuffed him, and escorted him on a military plane back to his home in Bata, where he was instructed not to leave the house under any circumstance. His passport and phone were confiscated.

Previously, on 27th October 2018, armed men beat and stabbed Alfredo Okenve in his leg before leaving him behind in a forested remote area outside of the city of Bata. Okenve, said that the two armed men, who were driving a car with a security sector license plates, stopped his car and told him he was under arrest, started beating him, and threatened to kill him if he resisted. One of Okenve's brothers, who was in the car with him, was also beaten when he tried to help his brother. The perpetrators might have been targeting his brother, Celestino Okenve, who leads the opposition party Popular Union, as they had a picture of Celestino Okenve. In a statement, CEID said:

"Alfredo Okenve and civil society in general in Equatorial Guinea are being harassed for their untiring work for the development of the country that has celebrated 50 years of independence but is still subject to the arbitrariness of the country's authorities." (translated from Spanish)

As reported previously on the Monitor, Alfredo Okenve and his colleague Enrique Asumu were arbitrarily detained in April 2017 when they boarded a flight to Bata from the country's capital Malabo, where they celebrated the 20th anniversary of CEID. They were held for two weeks until they agreed to pay a fine of 2 million francs CFA (USD 3,325). Okenve has also experienced harassment for his anti-corruption work and his role within CEID, which was at the time a member of Equatorial Guinea's steering committee to join Extractive Industry Transparency Initiative (EITI). CEID withdrew from the committee earlier in 2018 in part due to harassment.

CEID was also suspended in March 2016 after being accused of "disseminating among the Equatoguinean youth messages aimed at inciting to violence and civil disobedience” in relation to the Youth Forum on Tolerance and development in Equatorial Guinea in January 2016, organised by CEID.

On 25th February 2019, security forces detained activist Joaquín Elo Ayeto, who is also a member of the opposition political party Convergencia para la Democracia Social (CPDS), on accusations that Ayeto is holding information on a coup attempt. According to reliable sources received by Amnesty International, Ayeto was subjected to torture at the police station, resulting in injuries, and received death threats.

In a statement on 15 February 2019, 10 human rights and anti-corruption groups denounced the arrest warrant against French anti-corruption lawyer, and founder of anti-corruption legal advocacy group Sherpa William Bourdon by authorities in Equatorial Guinea. Arrest warrants were also issued for 15 other people, accusing them of laundering money and assisting in the finance of terrorism and the proliferation of arms trafficking in Central Africa. Sherpa filed, in 2008, a criminal complaint for embezzlement in France against Teodorin Nguema Obiang, the son of Equatorial Guinea's president, on behalf of Transparency International. A French court convicted Obiang, in absentia, to a three year suspended prison sentence and a fine of 34 million USD, in 2017. Some of the other people facing arrest warrants, such as Onofre O. Otogo Ayecaba and Hector-Santiago Ela Mbang, are already in detention. They were arrested after a failed coup in December 2017.

On 12th November 2017, the day of municipal and legislative elections in Equatorial Guinea, an armed, unidentified member of the security forces arbitrarily detained activist Raimundo Bernabé Nnandong outside of a voting station, after he attempted to make a photo with a relative. He was released on 15th November 2017. Bernabé Nnandong is a film maker and he was at the time in charge of Youth, Social Action and Communication within CEID. Tutu Alicante, Executive Director of EG Justice, an NGO monitoring human rights in Equatorial Guinea, said:

“Once again, the government of Equatorial Guinea has demonstrated that it’s incapable of guaranteeing free, fair, and transparent elections. The illegal detention of Raimundo Nnandong and five election observers from political opposition groups seriously undermines the whole electoral process and the legitimacy of the government.”

A wave of arrests of members of the opposition party Ciudadanos por la Innovacion (CI; Citizens for Innovation) followed after alleged scuffles took place between party members and police officers at a banned CI rally in Aconibe on 5th November 2017. According to EG Justice, security forces surrounded CI's headquarters on 28th December 2017 in Malabo for twee weeks, while more than 46 opposition members were arbitrarily detained in Malabo, and scores of others in Akonibe and Bata. Fabián Nsue Nguema, lawyer of CI, said on 22nd January 2018 that 135 members of the opposition were detained.

One of the detained opposition figures of CI, Santiago Ebee Ela died in custody in Malabo on 14th January 2018. He was tortured to death, said CI. The EU expressed its concerns on the 'sharp decline' in human rights in Equatorial Guinea in a statement in February 2018:

"The continuing restrictions of freedoms and arrests, in particular of political opponents, taking place in Equatorial Guinea following the elections of November 2017, represent a source of serious concern. To this day, over 130 people are reported as arbitrarily remaining in detention. The death under police custody of Mr. Ebee Ela, a member of the opposition party 'Ciudadanos por la Innovación', confirms the serious deterioration of the human rights situation in the country. The competent authorities of Equatorial Guinea should properly investigate, without delay, and clarify the causes of his death."

On 12th February 2018, a mass trial started against officials, members and supporters of the CI political party, who faced charges of 'rebellion, attacks against authority, public disorder and serious injury and damage' while the prosecutor asked for the death penalty. On 26th February 2018, a court in Mongomo dissolved the opposition party Ciudadanos por la Innovacion (CI) on grounds of 'threatening state security'. Additionally, the court handed down lengthy prison sentences of 30 years to 21 of  the CI's members. On 7th May 2018, the country's Supreme Court upheld the dissolution and prison sentences.

On 4th July 2018, president Teodoro Obiang Nguema issued a general amnesty to "all citizens condemned by the courts... for political offenses in the exercise of their activity, serving or not serving their sentence” and “for all those deprived of their liberty or prevented from exercising their political rights”. Human rights organisations expressed skepticism about the decision. Tutu Alicante of EG Justice said to Financial Times that the decree should not be taken at face value and that "this is just a smokescreen by the president to distract the international community". On 10th October 2018, the commemoration of Equatorial Guinea's 50th year of independence, President pardoned a total of 81 people, including 34 opposition members.

BREAKING: We've just learned that ALL charges against cartoonist Ramón Esono Ebalé have been dropped!
He will be home with his loved ones in a few days. #EquatorialGuinea #FreeNseRamon pic.twitter.com/aXJqoM5YKM

On 16th September 2017, security officers arrested political cartoonist and activist Ramón Nsé Esono Ebalé outside a restaurant in the country's capital, Malabo. Two Spanish nationals were arrested with Ebalé, and the three were taken to the Office Against Terrorism and Dangerous Activities in the Central Police Station in Mabalo. The two Spanish nationals were released after hours-long interrogation, while Ebalé remained in detention. Ebalé, who had lived outside of Equatorial Guinea for several years and was only in the country to renew his passport, is known for his political cartoons criticising president Teodoro Obiang Nguema Mbasogo. He started the blog Locos TV in which he published a daily cartoon depicting Equatorial Guinean politicians, which was shut down by authorities in 2014, and illustrated the satirical graphic novel La Pesadilla de Obi (Obi’s Nightmare).

On 19th September 2017, state television announced that Ebalé was arrested and accused of money laundering and currency counterfeiting. During a hearing at the Malabo Court on 7th December 2017, he was formally charged with 'engaging in counterfeit' under article 283 of the Criminal Code and article 384 of the Law on Criminal Procedure. Ebalé was finally released from prison on 7th March 2018 after spending nearly six months in detention. The prosecutor requested his release stating 'an absence of clear evidence' during a court hearing on 27th February 2018.

On 25th May 2017, musician Benjamin Ndong, known as Jamin Dogg, was arbitrarily detained two weeks after he released a song in support of a protest of taxi drivers against the higher price for a license, according to a statement of opposition party Convergencia para la Democracia Social (CPDS; Convergence for Social Democracy). He was released the same day without charge.