Independence of Czech TV and radio under threat more

Political maneuverings and uncertainties spark protests across the country more 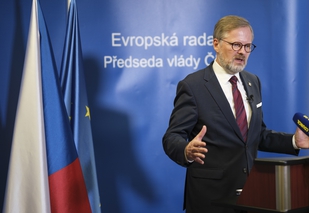 On 1st July 2022, the Czech Republic began leading the EU Council’s rotating presidency. In an open letter, the International Press Institute (IPI), jointly with 16 media NGOs, urged Prime Minister Petr Fiala and his government to use the EU Council Presidency to strongly endorse the European Media Freedom Act (EMFA). The EMFA was announced in 2021 and is meant “to safeguard the pluralism and independence of the media in the EU internal market”.

On 1st July 2022, the Czech Republic began leading the EU Council’s rotating presidency. In mid-June 2022 during a press conference in Prague, Prime Minister Petr Fiala outlined the priorities of the Czech presidency for the six month period of the presidency, which includes: managing the refugee crisis and the reconstruction of Ukraine after the war; energy security; strengthening Europe's defence capabilities and cyberspace security; and boosting the strategic resilience of Europe's economy and democratic institutions. The motto of the presidency is “Europe as a task: Rethink, Rebuild, Repower”, inspired by a quote from one of the republic’s former presidents, Vaclav Havel.

Minister of Education Petr Gazdik, a member of the Mayors and Independents Movement (STAN), the second biggest coalition party, stepped down after a member was implicated in a case related to bribery and suspicions of illicit drug trafficking. Gazdik has not been charged but was linked to those involved. He chose to step down while maintaining his innocence. The arrests in connection with the scandal linked to the Prague Transportation Company are shaking the coalition government, which was formed in November 2021. Should STAN implode the five-party government coalition led by Peter Fiala may lose its majority in the parliament.

Separately, during the first months of Russia’s invasion of Ukraine, the Czech government supported Ukraine in a variety of ways. However, the rapid influx of refugees has put a strain on the country, which resulted in a request to the EU’s Agency for Asylum to help support its efforts. At the end of May 2022, the parliament discussed scaling back the support for Ukrainian refugees and decided on restrictions. On 27th June 2022, “lex Ukraine II” entered into force, tightening welfare benefits for Ukrainian refugees.

In the latest Reporters Without Borders Press Freedom Index, the Czech Republic shows a notable improvement,moving up twenty places from its ranking last year. Previously, the media have faced criticism and harassment in the country, with verbal attacks coming from former Prime Minister Andrej Babis. While press freedom has improved since the previous populist government lost power, the report identifies shortcomings still present in the country, including threats to media pluralism and pressure put on public broadcasting.

In an open letter, the International Press Institute (IPI), jointly with 16 media NGOs, urged Prime Minister Petr Fiala and his government to use the EU Council Presidency to strongly endorse the European Media Freedom Act (EMFA). The EMFA was announced in 2021 and is meant “to safeguard the pluralism and independence of the media in the EU internal market”. It is expected to be formally presented in the third quarter of 2022, after it was opened for public consultation until 21st March 2022. The Commission will use this to gather evidence and data from journalists and the media to shape the future of the EMFA.

A delegation of representatives from the European Centre for Press and Media Freedom (ECPMF) and the International Press Institute (IPI) met with the Ministry of Culture in Prague to discuss draft amendments to support the editorial independence of Czech Television. Czechia’s former government, under Andrej Babiš, faced criticism in this regard, and NGOs are hoping that the new amendments will improve the situation. The reforms are part of a legislative draft that is expected to make processes surrounding the Czech Television Council more democratic and representative. IPI Director Scott Griffen commented on the progress being made, assuring that the passage of these amendments would provide significant benefits to the independence of Czech Television, adding however that additional steps need to be taken.

The Czech Republic’s President Milos Zeman stated that he would veto a bill that would allow same-sex couples to marry. This statement comes after an equal marriage bill was submitted to the Czech parliament on 7th June 2022. The bill has both strong support and strong opposition, and it is not the first bill submitted in an effort to legalise same-sex marriage.

The country currently allows same-sex couples to have registered partnerships but that status does not afford the same legal recognition and rights as marriage, such as rights concerning taxation, property and adoption. The new bill would change this, allowing people in same-sex marriages to have the same rights in marriage as in heterosexual marriage. Public polling suggests that there is strong societal support for the legalisation of same-sex marriage but President Zeman does not want to see such a change. Instead, the President said he would support a constitutional amendment that would define marriage as the union between a man and a woman.

A recent survey showed that 76 per cent of disabled people in the Czech Republic have faced some degree of violence in the past five years. The most common forms of violence were verbal abuse, intimidation and threats, while others reported physical and sexual assaults. IUSTITIA, an organisation that provides legal assistance to victims of hate crimes, notes that people with disabilities are not adequately protected by the law. This in turn leads many victims not to report their assaults as they believe that reporting will not help them.