Bolivia: coca growers’ protests marked by violence and use of excessive force more

Bolivia: 83 attacks on the press reported in 2021 more

Social and political divisions lead to tension in Bolivia more

Bolivia: Criminalisation of environmental defenders and attacks on journalists more 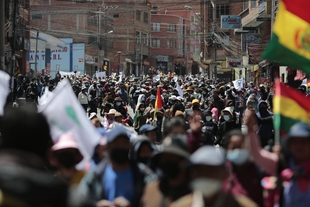 In August 2022, organisations Centro de Investigación y Promoción del Campesinado (CIPCA) and Fundación “Acción Cultural Loyola” (ACLO) reported facing harassment seeking to obstruct their work supporting Indigenous peoples in Huacaya, Chuquisaca. The organisations said local campesino groups and municipal authorities have opposed processes to establish the autonomy of ancestral territories in the region. On 22nd August 2022, these local groups issued a public letter alleging that there were irregularities in these processes and demanding the withdrawal of both CSOs from the Chaco region. A Guarani leader defended CIPCA and ACLO, saying the organisations work with the Indigenous communities and that the claims against them are unfounded.

Separately in August 2022, 36 civil society organisations issued a statement warning of serious human rights violations in Bolivia. The groups highlighted issues such as the harassment of activists and legislators working on the Popular Action for the Madidi National Park, smear campaigns and attacks on journalists and independent press, and rights violations amid the coca leaf producers’ conflict.

Protests by coca leaf growers from the Asociación Departamental de Productores de Coca (Adepcoca) continued throughout August 2022 in Bolivia. As previously reported on the Civicus Monitor, the protesters demand the closure of a parallel coca leaf market in La Paz – which members of Adepcoca say is illegal but enjoys protection from government authorities. On several occasions the coca leaf growers clashed with police, who acted to prevent them from reaching the market in dispute. On 11th August 2022, the Office of the United Nations High Commissioner for Human Rights (OHCHR) in Bolivia expressed concern about the excessive force used against demonstrators and the “public exhibition” of people detained.

On 8th September 2022, Bolivia’s Ombudsperson issued a statement condemning the use of dynamite explosives by demonstrators and the indiscriminate use of teargas by police during a march by coca leaf growers. The demonstration resulted in violent incidents, with protesters setting fire to the parallel market and groups of coca leaf growers clashing in the area.

Violence also led local residents to march, calling for an end to the conflict, which they said has led to the closure of schools and damage to the infrastructure of their homes, affected by explosions of chemical agents and dynamite.

In August 2022, press networks warned that newspaper Los Tiempos, based in Cochabamba, and its publisher Editorial Canelas S.A. had been facing political pressure through economic sanctions. The IFEX-ALC network said the newspaper was excluded from state advertising and received excessive oversight and audits that can result in fines and penalties. This has put Los Tiempos under intense financial pressure, which could trigger its closure or force it to change its editorial line. Earlier in the month, the newspaper’s directors held a press conference claiming that these economic sanctions are an attempt to force the sale of the newspaper to government sympathisers at a low price. IFEX-ALC urged Bolivia’s government to defend and guarantee freedom of expression and freedom of the press and to refrain from using state power to pressure or penalise media outlets. On 1st September 2022, Los Tiempos employees demonstrated in support of the newspaper.

On 19th September 2022, a journalist was harassed and kicked out of a Yungas coca growers’ assembly. Nicolás Sanabria Garrón, director of the programme “En otro formato,” was covering the event to record interviews about the parallel coca leaf market which has led to conflict in La Paz. He was surrounded and verbally attacked by people who called him “sold-out press,” “biased” and “coup-plotting.” Sanabria said he tried to argue that the news team was there to listen to the coca growers, but was pushed around and kicked out of the area. The Inter-American Commission on Human Rights’ Special Rapporteur for Freedom of Expression, Pedro Vaca, commented on the incident, saying demonstrators, protest organisers and government should guarantee the work of the press in covering matters of public interest.

At the end of September 2022, the regional group Voces del Sur published their annual report on freedom of expression and the press in Latin America. In Bolivia, the group registered 77 alerts for restrictions and violations of these freedoms throughout 2021. This was a reduction compared to the previous year, when 117 cases were documented. However, the report showed a sharp increase in these incidents in the second semester. In most cases perpetrators were identified as state actors or government supporters. There was a rise in cases related to stigmatising discourse against journalists and in restrictions on access to information. Voces del Sur also said journalists have reported cases of extreme violence in the Yungas region, including an attack with explosives on a press team covering conflict among coca leaf growers.