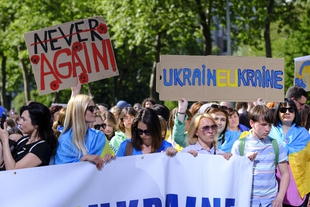 Several anti-war protests were held during February and March 2022, both before and after Russia’s invasion of Ukraine on 24th February 2022. Several protests for labour rights also took place during this period. Following the banning of Russian outlets , press groups raised concerns of censorship. The groups emphasised that fighting disinformation should not come in the form of censorship; instead there should be a focus on independent fact-checking for misinformation, in addition to teaching media literacy.

Organisations call for peace in Ukraine

Several anti-war protests were held during February and March 2022, both before and after Russia’s invasion of Ukraine on 24th February 2022.

On 31st May 2022, several national public-sector unions planned a one-day nationwide strike. The strikes caused disruption in many sectors, including public transport and recycling and waste centres. Both the SNCB and STIB reported that several transport lines were not running due to the strike. Major unions were expected to participate in the strike, including the General Central of Public Services (CGSP) and the General Labour Federation of Belgium (FGTB). Strikers from the CGSP were protesting against the increasing cost of living in Belgium and the decrease in household purchasing power. The protesters were seeking higher pensions, quality employment and respect for union workers. The Belgian socialist union was also expected to join the strike against the “general malaise” in the public sector caused by the high cost of living and increased levels of inflation.

On 27th February 2022, thousands of protestors took to the streets in Brussels to protest on behalf of the Workers’ Party of Belgium (PTB/PVDA). The PVDA, a far-left party in the country, organised the march against the high prices caused by the pandemic and Russia’s invasion of Ukraine. Protesters were out to denounce the government’s inaction on higher energy costs and on the long pending demand for increases in salaries and pensions.

The Belgian government previously took steps to temporarily cut taxes and hand out a one-time cash payment to households to compensate for the increased prices. The government agreed to give all households a one-time electricity discount of €100 and to temporarily lower the VAT on energy to 6%, which is set to expire on 1st July 2022.

However, the PVDA argues that the temporary measures are not enough. Raoul Hedebouw, chair of the PVDA, called on the government to take serious measures and stressed that VAT on both electricity and gas must be permanently reduced to 6%. The day after the demonstration, on 28th February 2022, Belgium’s Federal Energy Minister Tinne Van der Straeten stated she would argue for a Europe-wide cap on gas prices after having previously voiced her support for a reduction of VAT to 6% for both electricity and gas. Van der Straeten reiterated this support ahead of the leaders' summit in Brussels from 24thto 25th March 2022.

Protests between taxi and Uber drivers over new government plan

On 31st May 2022, the Taxi Plan was given the green light by the Brussels Parliament’s Home Affairs Committee. The final draft of the plan aims to unify the sector under a common statute, via identical operating conditions for operators and drivers. The plan includes a limitation on the number of taxi vehicles authorised to provide taxi services, which is to be set by the government. The legislation also purports to address the competition issues between operators of driving services. Further debate and a vote on the plan are scheduled to take place on 3rd June 2022.

On 24th May 2022, taxi and Uber drivers protested outside the Brussels Parliament, where lawmakers were considering legislation to pass the city’s Taxi Plan. While the new proposal is aimed at balancing the playing field between the two types of drivers and seeks to put a cap on the number of Uber drivers operating in the area, both taxi and Uber drivers protested the plan. Taxi drivers wanted further assurances that the cap on the number of Uber drivers will not be raised, while the Uber drivers argued that the cap is too low. While the Belgian taxi federation accepts a cap at 2,600 Uber drivers, Uber is concerned that the imposition of a cap will cause many drivers to lose their source of income.

On 4th May 2022, the European Commission announced a new proposal to ban three additional Russian state-owned broadcasters from the EU. The Commission stated that the new bans are intended to crack down on further misinformation from Russia after the invasion of Ukraine, but did not name the media outlets.

Earlier, on 27th February 2022, the European Commission announced a ban on two Kremlin-backed media outlets, RT and Sputnik. The ban came into force on 2nd March 2022 and prohibits EU operators from broadcasting, facilitating or otherwise contributing to the dissemination of any content from the two media outlets. The legal justification for the ban comes from the prohibition on propaganda for war under international and European law. The prohibition was ruled lawful by the European Commission and the European Court of Justice during the previous usage by EU member states. The Commission’s chief spokesman Eric Mamer said that the institution does not take the measures lightly. “We attach great importance to media freedom. We are looking at the best legal way to ensure that we can achieve our objective.”

Following the European ban, in Belgium, Flemish Media Minister Benjamin Dalle asked the Flemish media regulator VRM to cancel RT broadcasts in Flanders and to pass the same request on to the media regulator of the French Community.

Few media outlets in Belgium commented on the bans and their impact. Jean-Pierre Jacqmin, director of information at RTBF, stated that the media outlet “didn't talk about it extensively. There were a lot of other subjects that took over and that's part of the explanation. But we obviously passed on the announcement of the European Commission. We did an article on our website trying to decipher it and we also talked about it on the radio in the form of a debate.”

The banning of Russian outlets is being considered a form of censorship by a number of press freedom groups. The groups emphasised that fighting disinformation should not come in the form of censorship; instead there should be a focus on independent fact-checking for misinformation, in addition to teaching media literacy. The European Federation of Journalists (EFJ) called the ban on Russian media a mistake, citing concerns about restrictions on press freedom. The EFJ General Secretary Ricardo Gutiérrez stated that:

“[t]his act of censorship can have a totally counterproductive effect on the citizens who follow the banned media. In our opinion, it is always better to counteract the disinformation of propagandist or allegedly propagandist media by exposing their factual errors or bad journalism, by demonstrating their lack of financial or operational independence, by highlighting their loyalty to government interests and their disregard for the public interest.”

On 15th May 2022, the Ghent Appellate Court again rejected the extradition of Spanish rapper Valtònyc to Spain, where he faces a prison sentence. This was the fourth time a Belgian court had rejected the request from the Spanish government. Although the Belgian public prosecutor had 24 hours to decide whether or not to appeal the decision to Belgium’s highest court - the court of cessation - the prosecutor declined to bring any further appeal, effectively ending any chance of extradition.

The rapper fled to Belgium in 2018 after being charged in Spain for glorifying terrorism, insulting the Spanish royal family and making threats in his lyrics, as previously reported on the CIVICUS Monitor.

Earlier, in December 2021, the Appeals Court in Ghent found that the charges against the rapper did not qualify as crimes under Belgian law, but Belgian prosecutors appealed the decision. After ruling out glorifying terrorism and threats as grounds for extradition, Valtònyc’s case was retried solely on the basis of lese-majeste. Such an offence no longer exists in Belgium and Belgium’s own slander law against the monarchy was struck down in October 2021. The previous law was removed from the Belgian criminal code after it was determined that it violated the right to freedom of expression.