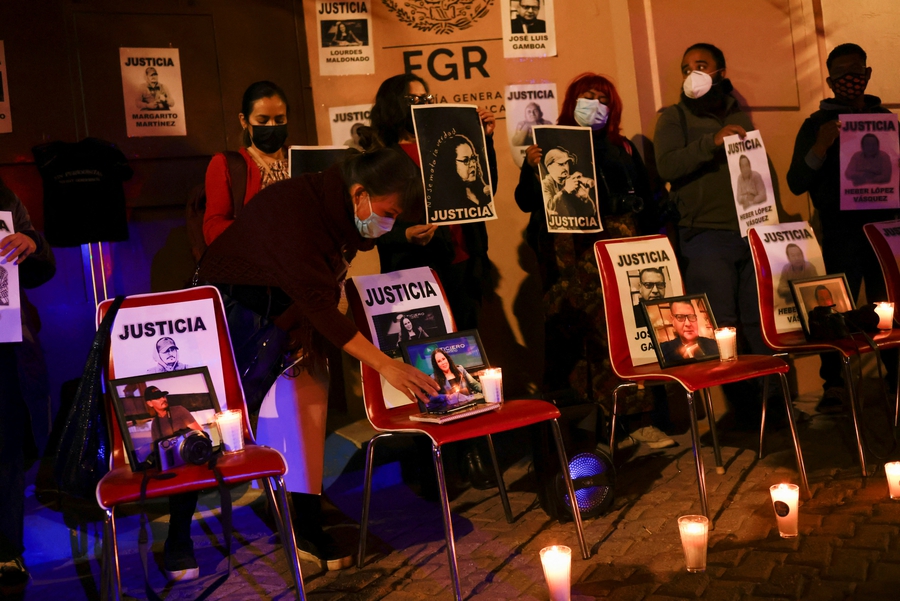 Candles and photos of killed journalists are placed as part of a protest. 14 February 2022, REUTERS/Jose Luis Gonzalez.

Members of the press assassinated

#MEXICO: CPJ is shocked by and condemns the murder of journalist Antonio de la Cruz of newspaper @ExpresoPress. De la Cruz was shot earlier today near his home in Ciudad Victoria, the capital of the northern Mexican state of Tamaulipas. https://t.co/npfbygEkpQ

On 29th June 2022, veteran journalist Antonio de la Cruz, a reporter for the newspaper Expreso, was shot dead near his house in Ciudad Victoria, capital of the state of Tamaulipas. De la Cruz had worked with Expreso for over two decades, covering environmental issues and agriculture. According to prosecutors, he was in his vehicle with his 23-year-old daughter, who was seriously injured and died a few days later of the wounds sustained in this attack.

On 9th May 2022, Yesenia Mollinedo and Sheila Johana García, both of El Veraz, were shot dead in Cosoleacaque, Veracruz. According to the Committee to Protect Journalists, they were getting into their car in the parking lot of a convenience store when assailants approached and shot them. Mollinedo was the founder and editor of El Veraz, a news outlet that covers southern Veracruz, where García had recently been hired as a camera operator. Mollinedo previously covered crime and security in the area for the news outlet but reportedly stopped doing so after receiving numerous death threats over the past few years. Still, her brother said she had been threatened in the weeks preceding her killing. Local authorities said an investigation had been opened to determine if their work as media motivated the murders.

As reported in the ‘Peaceful Assembly’ section of this update and in previous updates, a gruesome wave of killings has led media workers to organise recurrent protests in 2022. At least 12 journalists have been killed in Mexico so far this year.

Between 27th April and 21st May 2022, at least 11 journalists connected to the outlet Sin Censura received threatening messages on social media. In several cases, the threats included detailed personal information, photographs of family members and information about where they lived and places they frequented. For example, Manuel Pedrero, director of Los Reporteros Mx and a collaborator of Sin Censura, received threats that mentioned the names of family members. His partner was also threatened. The journalists said that they have experienced constant stigmatisation campaigns.

Between March and May 2022, five reporters covering elections in Tamaulipas received threating messages that allegedly came from two candidates to state government. For example, Gildo Garza Herrera, editor of Grupo Cambio, received a series of threats on messaging applications that mentioned his work covering the election. In a separate incident, the mayor of Nuevo Laredo accused Garza of publishing “fake news” about the campaign as an effort to discredit his work, which led to a series of stigmatising statements against him on social media. Other reporters, like Luis Daniel Ochoa Alfaro and Gabriela Villalobos Ravizé, were verbally attacked by candidates while asking questions at public press events.

In May 2022, a newly formed union of workers at an electronic plant in Reynosa filed a complaint under the United States-Mexico-Canada Agreement (USMCA). They claim that the collective agreement between the company Panasonic and the old union is invalid because it was rejected by workers, and that despite this rejection the company has been improperly deducting union fees from workers’ wages. Earlier in 2022, workers voted overwhelmingly to be represented by a new independent union, the 20/32 Movement Union (SNITIS). The US accepted SNITIS’ evidence and filed the complaint with the Mexican authorities. Under the USMCA Mechanism, Mexico had ten days to respond and then 45 days to complete an investigation and propose a solution.

Police violence against protesters and journalists

On 19th May 2022, police in Toluca violently disrupted protesters at a peaceful LGBTQIA+ event in support of same-sex marriage, which was taking place outside a church. According to witnesses, about 100 officers circled around 20 people, including journalists covering the demonstration, and then began aggressively pushing them back from the church with their shields. One journalist said he was hit with a shield on the left side of his torso, causing him to fall. While he was on the ground, the public security forces allegedly continued to advance, stomping on him. The journalist had to go to hospital and suffered injuries such as a torn posterior knee ligament and a torn meniscus. The State of Mexico human rights commission said they had opened complaints to investigate freedom of peaceful assembly and expression violations.

In a separate incident, on 1st May 2022, police officers used excessive force against protesters who were outside the Municipal Palace in Irapuato, Guanajuato, seeking justice for victims of femicide. According to news reports, the demonstration had been mostly peaceful but a group of hooded protesters vandalised the municipality’s building. At least 30 people were arrested. Videos shared on social media showed officers beating protesters who were not among the hooded group. Some of those detained allege to have been threatened with trumped-up charges and sexual assault by police officers. Most were held for a few hours before being released.

Article 19 also reported that a woman journalist covering the demonstration was assaulted by police. The reporter said that the police grabbed her by the neck abruptly, and when she identified herself as a journalist, the officer squeezed her even harder before letting go. She required medical attention after the aggression.

On 26th May 2022, about 1,300 migrants staged a demonstration near the border with Guatemala to demand their applications for documents be processed. Many migrants and refugees have been unable to obtain documents which certify their legal stay in Mexico and which would allow them to move around Mexican territory, toward the United States border. The demonstrators, most of whom were from Latin America, warned that they intended to march across Chiapas to other parts of Mexico if they did not receive a response.

On 3rd June 2022, members of a migrant caravan marched to the headquarters of the National Human Rights Commission (CNDH) in Tapachula, in the border state of Chiapas, to ask for protection and precautionary measures. The caravan reportedly set out with over 15,000 people toward the border with the United States. However, within a few days the caravan was fragmented.

In a similar story, on 24th May 2022, asylum seekers in Tijuana held a protest against Title 42, the U.S. policy which prohibits migrants from entering.

On 10th May 2022, thousands of women and their supporters marched in Mexico City on Mother’s Day to demand accountability amid a worsening surge in violence against women and girls. Among those marching were mothers of women and girls who had gone missing. Protesters blocked traffic while chanting, “Where are they, where are they? Our children, where are they?” For example, environmentalist Irma Galindo was set to meet with authorities in October 2021 to discuss threats she had received for running a programme designed to protect activists from violence. She never made it to the meeting and her family believe her disappearance is linked to her activism to stop illegal logging in her home state of Oaxaca.

The demonstration was joined by a group of Central American mothers searching for loved ones who disappeared on their journey to the United States. The group has marched across Mexico in 2022 to demand information on their missing loved ones, as well as justice for them. According to the United Nations, more than 95,000 people in Mexico were officially registered as disappeared as of November 2021.

Separately, on 9th May 2022 dozens of journalists marched in Mexico City to protest violence against journalists in the country and to demand justice for communicators killed. Civil society organisations called on the government to admit to the crisis and implement urgent measures to protect freedom of expression. “It is a really serious, critical situation that we are experiencing in Mexico today,” said Adriana Urrea, president of SutNotimex, the union of state news agency Notimex.

In another protest, on 3rd May 2022 thousands of students at the University of Guanajuato marched to demand justice for 19-year-old university student Ángel Yael Ignacio Rangel, who was killed by the National Guard on 27th April 2022. Witnesses said Rangel and other students were in a car when they came across several National Guard patrols, which began to chase them and fired at the vehicle from afar. Rangel was killed with a shot to the head. Another student was seriously injured. “Angel did not die, the Guard killed him!” protesters chanted. One officer was charged for the police killings.

On 24th May 2022, taxi drivers blocked access to Mexico City International Airport in a protest against ride-hailing apps. A statement from Mexico's National Transportation Movement, a collective of transportation workers, said it planned to protest at the airport “with the purpose of joining forces so that together we defend our source of work.” A spokesperson said traditional taxis are “at a total disadvantage, as the taxi sector is subject to a number of obligations while the other service offered through apps does not need to comply with any of the laws.”

On 7th May 2022, almost 2,000 people marched in Mexico City against the right to legal abortion. With many people dressed in white, participants marched and carried a huge banner reading “the first right is life.” The event was supported by catholic leaders and conservative groups. Although abortion was decriminalised in Mexico City, each state has its own criminal code and there are anti-abortion laws in several Mexican states. In September 2021, however, the Supreme Court declared the laws criminalising abortion unconstitutional.