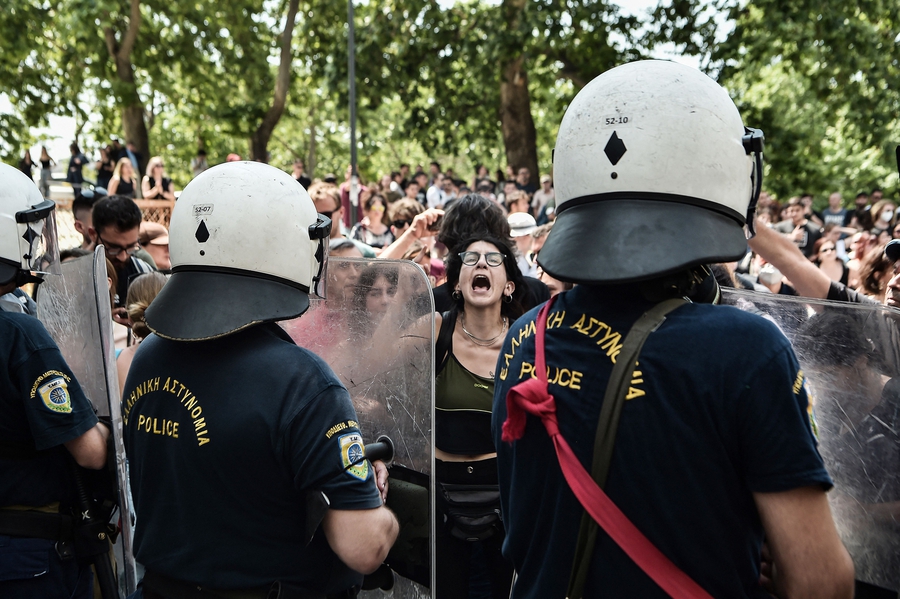 Non-profit organisations continue to accuse Greek authorities of illegally pushing migrants into Turkey, amid the recent increase in border control around the Greek islands. Greece has repeatedly denied the allegations, despite theUNHCR recording over 500 incidents of informal returns, and conducted its own investigation into the reports. On 30th March 2022, Greece’s National Transparency Authority (NTA), which oversaw the investigation, announced that it found no evidence of forced returns of asylum seekers by the Greek coastguard.

Additionally, advocacy groups continue to report on the conditions at the refugee camps within Greece. Previous reports of a hunger crisis in the camps were challenged by the Migration Ministry of Greece, which accused NGOs of fabricating the reports. The latest report, from 6th May 2022, stated that the camp on Samos was operating with reduced access to running water. The Greek Migration Minister reported that the water reduction was due to damage to one of the water pumps and that there was difficulty in obtaining a spare part to repair it.

On 9th June 2022, Turkey’s president, Recep Tayyip Erdogan, warned Greece to demilitarise the islands in the Aegean Sea, demanding that Greece stop arming the islands that have non-military status and adhere to international agreements. Erdogan alleged that Greece has been building a military presence on the islands in violation of treaties and argued that the islands were ceded to Greece under the condition that they remain unarmed. Greece responded to the allegations by stating that Turkey deliberately misinterpreted the treaties and maintains that Greece has legal grounds to defend itself in the face of hostile actions.

Greece and Turkey have a history of disagreements over several issues, including airspace and maritime boundaries. The two countries had been in exploratory talks to address some of these issues, but in early June 2022,Erdogan announced that Turkey was halting the discussions.

According to a new ranking from Rainbow Europe, ILGA-Europe’s annual benchmarking tool on EU countries’ LGBTQI+ equality laws and policies, Greece has improved its score from the previous year’s report (up to 52% from 47%), ranking 19th out of the 49 countries. The report stated that Greece had one of the biggest jumps in scores and noted that Greece had seen positive legislative movement on LGBTQI+ policies, including lifting a ban on blood donations and adopting a new equality action plan.

This protest is the latest in a series of demonstrations at the university over the past few months. On 26th May 2022, clashes broke out between students and riot police at the school. A group of approximately 50 students were protesting against the implementation of university police when they reached a barricade set up by police riot units and were reportedly hit with tear gas and stun grenades. The police stated that the incident was being investigated and claimed that the police were attacked by the students.

Earlier, on 10th May 2022 and 19th April 2022, groups of students clashed with police at the university during protests against the construction of a library at the site of an old building used as a student “hangout.” During the protests, riot police were deployed to disperse the demonstrators, using methods such as tear gas to push back the protesters.

The protests began after the Council of the State, Greece’s highest administrative court, ruled that the legislation which provides for the creation of a new police corps, permanently stationed on university campuses, does not violate academic freedom. The ruling was handed down in early 2021 and entered into force in June 2022, with university police being stationed at two of Greece’s largest campuses in Athens and Thessaloniki. Though unarmed, the on-campus guards will be supported by armed police officers stationed outside the campus. Student associations from the universities impacted by the legislation have staged protests since February 2021, holding banners that stated “university police will not enter our schools.”

Protests against US military presence

On 12th May 2022, thousands of people marched in Athens and in Greece’s second biggest city, Thessaloniki, to protest against the renewal of the military cooperation agreement, US-Greece Mutual Defense Cooperation Agreement (MDCA), with the United States. The protest was organised by the Communist Party of Greece’s workers’ union, PAME, and other anti-war groups, who held banners against the agreement and demanded the withdrawal of the US bases in Greece.

Additionally, the demonstrators gathered to protest against the war in Ukraine and against NATO. The Greek Communist Party (KKE) and the extra-parliamentary left rallied against Greece's provision of armaments to Ukraine, calling the situation an imperialist war waged on behalf of the US and NATO. Anti-imperialist and working class organisations have been mobilising across the country protesting the enhanced cooperation with military blocs and participation in imperialist endeavours.

The demonstration was ultimately unsuccessful in dissuading Greece’s parliament from approving the renewal, which gives the United States the right to deploy forces to four additional bases.

On 1st May 2022, thousands took to the streets in Athens to protest against soaring food and energy prices. "Everything has risen. Electricity has risen, gas has risen, necessities have risen. It's chaotic. We can’t get paid fast enough to pay something else. We are trying with every means to cut out what is (not) necessary to pay these things," Pantelis Iordanou, a car body painter, told Reuters. Earlier, on 6th April 2022, thousands protested in the Greek capital during a nationwide strike over rising prices and low incomes.

On 2nd April 2022, workers of the railway company TRAINOSE protested at the Thessaloniki rail yard against the transport of NATO war tanks from the port of Alexandroupolis to Ukraine. The port is a regular docking area for NATO warships and the demonstrators were protesting Greece’s involvement in military activities between the US and NATO. The protest went on despite repeated orders and threats from the authorities, with railway workers refusing to participate in the transport of the tanks. In response to the protest and refusals to move the tanks, the head of the railway authority TRAINOSE threatened to fire and sanction the workers who refused to move the trains. Greek trade unions in Thessaloniki reacted to the threats by demanding the Greek railway not be used for the transport of military equipment and demanding an end to threats to workers who refuse to transport such equipment. In a joint statement, the trade unions stated that

“[n]o involvement of our country in the wars in Ukraine that are taking place for the profits of the few at the expense of the people. In particular, we demand no use of our country’s railway rolling stock to transport an American-NATO arsenal to neighbouring countries.”

The day before, on 1st April 2022, thousands of people demonstrated in Athens protesting the ongoing wars across the world, including in Ukraine, and denounced the involvement of Greece in such conflicts.

On 24th March 2022, a demonstration at the Piraeus port region of Athens took place against the docking of the French battleship Charles De Gaulle at the port. The protests, organised by far-left organisations, addressed the ongoing interventions, including the war in Ukraine and the renewed US-NATO agreement. Greek communists are demanding that the Greek government stay neutral and keep Greece out of the war. The protest comes after previous demonstrations against the docking of NATO ships in the port, which included members of the Greek Communist Party throwing red paint at the ships on 19th March 2022.

The anti-US protests followed earlier peace protests by Greek workers and peace activists, who staged a large anti-war rally on 24th March 2022. The protest, backed by the Greek Committee for International Detente and Peace and the Panhellenic Union of Merchant Marine Engineers, denounced Russia’s invasion of Ukraine and was held in solidarity with those at the centre of the war. This was not the first peace protest against the war, with thousands of people protesting in Athens at the beginning of March 2022, calling for an end to the war.

In contrast to the anti-war protests, on 3rd April 2022 a pro-Russian motorcade took place in Athens. Hundreds of demonstrators, many waving Russian flags, drove into the town square at the same time as a pro-Ukraine rally was taking place. During the motorcade, a group attacked the pro-Russian demonstrators, which resulted in two people receiving injuries and the arrest of two men.

On 10th May 2022, healthcare workers staged a five-hour protest in Athens. The work strike was launched under the leadership of the Greek labour union for public hospital employees (POEDIN). The healthcare unionists were protesting against a bill that would privatise a part of Greece's primary healthcare system. Union representatives and workers stated that the legislation would negatively impact the healthcare system, which was already hampered by the pandemic. POEDIN said in a statement that

“[h]ealthcare employees do not want patients' money but substantial increases in salaries now that price hikes have crumbled us. A newly appointed health worker receives a salary below the minimum wage of the unskilled worker.”

They called for the withdrawal of the bill, the removal of work suspensions, and an increase in salaries. The Federation of Hospital Doctors Associations of Greece (OENGE) also participated in the rally and rejected the passing of the bill. The protest comes after a previous demonstration on 30th March 2022 by healthcare workers against the legislation, where protestors faced police attacks.

On 22nd April 2022, the International Press Institute, along with other European and international press freedom and journalists’ organisations, released a joint statement directed to the Greek government and EU officials concerning the surveillance of Greek journalist Thanasis Koukakis. Koukakis is a journalist covering financial and banking issues in Greece. On11th April 2022, it was first revealed that Koukakis had been under surveillance for approximately ten weeks when his cell phone was hacked and infected with surveillance software, known as Predator. During the time he was surveilled, Koukakis was investigating topics related to alleged money laundering and corruption in the banking sector. After the revelations, on 12th April 2022, a government spokesperson suggested that the hacking was carried out by an individual or private actor and denied any government involvement in monitoring Koukakis. In the wake of the denials, it was alleged that the Greek National Intelligence Service (EYP) had been surveilling Koukakis for several months for national security reasons. On 18th April 2022, the Athens Prosecutor’s Office ordered a preliminary investigation into the alleged surveillance to determine whether there had been a breach of telecommunications secrecy and by whom.

The partners of the Media Freedom Rapid Response are concerned about surveillance measures hitting journalists in Greece. https://t.co/pjOKyp55bJ@MediaFreedomEU pic.twitter.com/i1hqVDKQoM

On 15th May 2022, a spokesperson for the Greek government responded to a recent reportfrom Reporters Without Borders (RSF) which discussed the setbacks in press freedom in Greece in 2021 and 2022. Citing the assassination of crime reporter Giorgos Karaivaz, the prevention of journalists from covering certain topics, and new legislation restricting press freedom, the report ranked Greece low on the World Press Freedom Index. Despite publicly supporting the European Commission’s recommendations on the safety of journalists, the investigation into Karaivaz’s murder is at a standstill and reporters face police violence while covering protests. In response, the Greek government accused RSF of “tainting the image of a democratic European country” and causing “significant and unjustified harm to the country’s international good standing.”