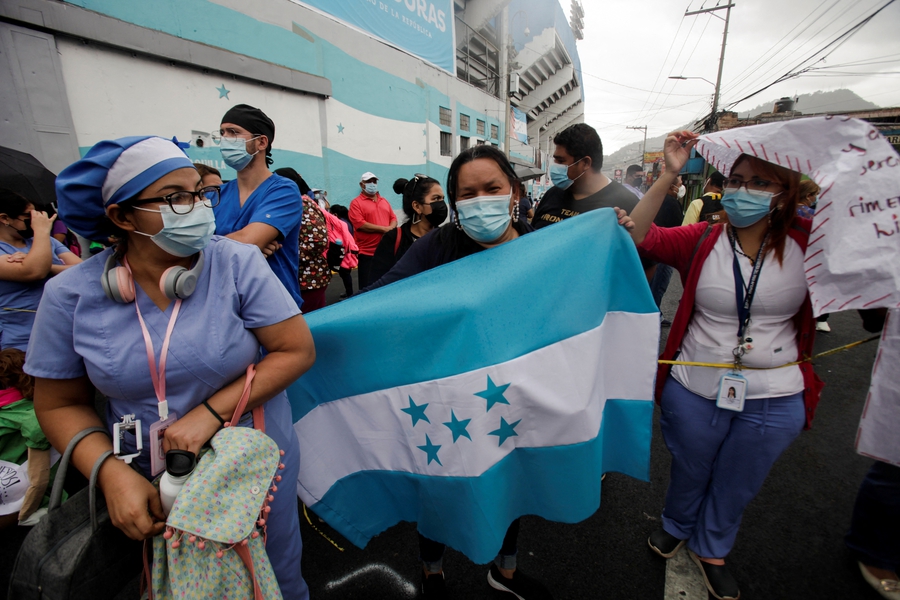 Healthcare workers block a street during a protest in Tegucigalpa. 28 January 2022, REUTERS/Fredy Rodriguez.

On 30th April 2022, human rights defender and Lenca Indigenous leader Justo Benítez Sánchez was shot and killed at his home in the San Isidro community, Santa Bárbara department. He was a renowned leader who defended land and water rights and had a key role in the resistance against a mining project that would affect the Gualcarque River. Recently, he had taken part in the Movimiento Ambientalista Santabarbarense (Santa Barbara Environmental Movement – MAS). The Office of the United Nations High Commissioner for Human Rights (OHCHR) in Honduras, which reported the murder, said that they have registered at least 30 human rights defenders targeted by attacks in 2022, 22 of whom are land and environmental rights activists.

Separately, on 1st May 2022, Garífuna leader Alonso Salgado was killed in an attack at the house of another Garífuna leader, Zury Quintanilla, in Rio Tinto, Atlántida department. Quintanilla was also severely wounded during the attack. Local groups said this was not the first attack against Garífuna leaders in the community; in 2020, another leader was killed – allegedly by organised crime.

The Inter-American Commission on Human Rights (IACHR) condemned these killings and attacks. They called on authorities to conduct an investigation, taking into account a racial-ethnic perspective and the possibility that these attacks could be linked to the leaders’ work as community defenders.

In a positive development, on 9th May 2022, the State of Honduras recognised its responsibility in the events that led to the death of LGBTQIA+ activist Vicky Hernández. Hernández, a trans woman, sex worker and activist with trans rights group Unidad Color Rosa was killed in San Pedro Sula in June 2009. The killing took place during a curfew, on the night of the military coup against then-president Manuel Zelaya. At the time, the military and police had effective control of the streets. Police officers had reportedly harassed Hernández hours before she was found dead. In June 2021, the Inter-American Court of Human Rights ordered the government to pay reparations to Hernández’s family.

In a speech, President Xiomara Castro made commitments to implement the regional court’s ruling – which included the recommendation of new measures to prevent violence and discrimination against LGBTQIA+ people. Among other things, Castro committed to creating a legal gender recognition procedure in Honduras that will allow transgender people to modify their legal documents to reflect their gender identity.

The first hundred days of Xiomara Castro’s presidency were marked by recurrent protests from healthcare professionals and public sector employees over labour rights demands, such as better working conditions and payment of delayed salaries. In some cases, protesters burned tyres and blocked roads.

On 29th March 2022, newspaper El Heraldo reported that a member of their investigative team, journalist Yony David Bustillo Centeno, had received death threats and been targeted by a smear campaign online. The harassment against Bustillo Centeno began after he investigated alleged corruption and lack of transparency in purchases by the Honduran Fire Department. The harassment against the journalist was condemned by the Inter-American Press Association (IAPA).

On 14th April 2022, the Honduras government’s deputy press secretary, Carlos Estrada, commented on allegations that HCH Televisión Digital had published false information, saying that addressing the outlet’s “fake news” is urgent. On his Twitter post, Estrada also said the government had “an organisational initiative to fight head on against these practices that have been used to imprison innocent people and even to carry out coups d’état.” The former president of the Colegio de Periodistas de Honduras (Journalists’ Association of Honduras - CPH) warned that content regulation by the State can lead to censorship, saying such an initiative was a threat to freedoms of expression and the press.

In May 2022, press freedom group Reporters without Borders published their World Press Freedom Index 2022. Honduras was placed 165 out of the 180 countries whose situation was assessed, indicating a “very serious” situation for press freedom. This was a sharp decline compared to the previous year, when the country was ranked 151st of 180 countries. The organisation highlighted the extreme levels of violence against journalists and said “the Honduran press has been slowly sinking into nightmarish disaster for more than a decade.”