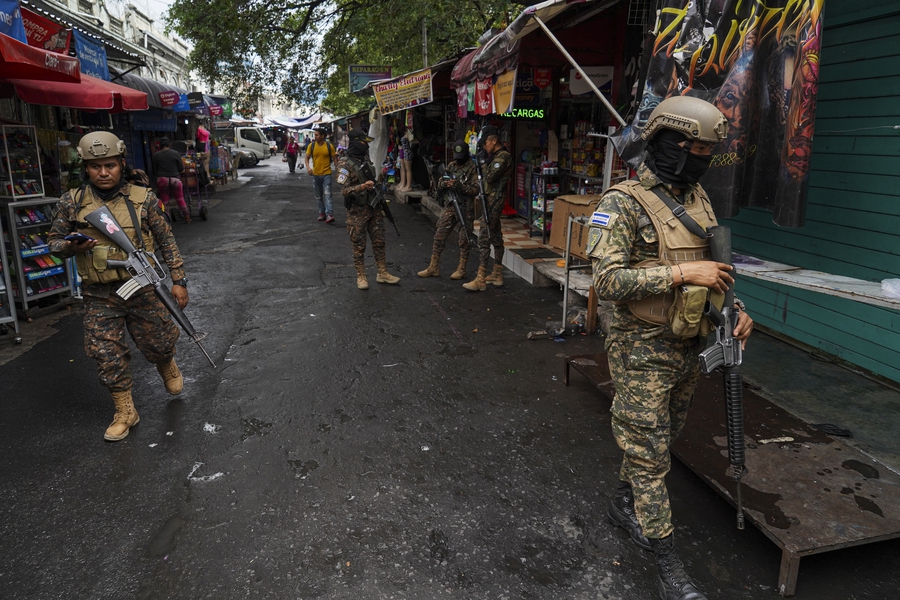 On 27th March 2022, El Salvador’s Legislative Assembly decreed a state of exception in an attempt to halt an increase in murders, which put a strain on the government’s security strategy with 76 killings in just two days. The measure had been requested by Salvadoran President Nayib Bukele, following a weekend of extreme violence.

The exception declaration (Decree No. 333) suspended freedoms of association and peaceful assembly, as well as other fundamental rights such as the right of defence and the inviolability of correspondence. The prohibition on the interception of telecommunications without judicial authorisation was also repealed and the period of administrative detention was extended to 15 days from the usual 72 hours.

The measures were called “disproportionate” by human rights groups. The Washington Office on Latin America (WOLA) said the declaration did not adhere to international human rights standards. The group also said ‘states of exception’ should seek to preserve, not undermine, the constitutional order or permit security forces and other agents and officials of the State to act arbitrarily and at their discretion. The Inter-American Commission on Human Rights (IACHR) also expressed concern and called on El Salvador to reverse measures that jeopardise the life and integrity of people in State custody.

“Under the reform, digital agents operating under police control would conduct “necessary undercover digital operations” to investigate crimes under #ElSalvador ’s Special Law Against Computer Crimes and other “special laws.” via @hrw https://t.co/1DeFCorg6L

In February 2022, pro-government legislators approved reforms to the Criminal Procedure Code that use ambiguous language to legalise and enable law enforcement’s use of digital surveillance tools. The changes approved on 1st February 2022 authorise the use in judicial proceedings of digital evidence obtained via undercover investigations, enabling the creation of ‘undercover digital agents’. Law enforcement carrying out such investigations would not require a court order, only permission from prosecutors. Civil society organisations criticised the lack of control and accountability mechanisms in this reform, saying it does not establish limits to agents’ actions or the types of surveillance tools they could use – posing great risks to privacy and freedom of expression rights.

Human rights groups such as Amnesty International said the reforms are “vague” and that the legislation could be used arbitrarily. Astrid Valencia, Centro America Researcher at the organisation, said “such regulations must be sufficiently clear and provide the necessary information on the conditions and circumstances under which the authorities are empowered to resort to such an invasive measure as communications surveillance.” Valencia noted that the legislation lacks effective guarantees to prevent and monitor abuses independently.

According to Human Rights Watch, these provisions are particularly troubling against the background of other amendments the Assembly made to the Special Law Against Cybercrimes in December 2021. One of the amendments criminalises using technology to obtain or distribute “confidential” information, a provision that could easily be misused against journalists, advocacy groups or whistle-blowers.

In late March and early April 2022, the Legislative Assembly approved a series of measures proposed by President Nayib Bukele in response to a rise in gang-related violence. They include several provisions threatening due process and human rights in El Salvador. Among other things, a reform of the law on criminal groups (Decree No. 350) approved on 5th April 2022 allows criminal charges against media outlets that “reproduce or transmit messages or statements created or allegedly created” by gangs that “could generate a state of anxiety and panic to the population in general.” The legislation also allows criminal charges for any type of publication, image, graffiti or other form of visual expression that “explicitly or implicitly” convey messages related to criminal gangs. The penalty for these offences is up to 15 years in prison.

Government legislators said the measure targets the relaying of gang messages. But critics said that the new law is so vague that it could be used to charge virtually anyone who speaks generally about the gangs, such as describing their territorial control or sharing gang graffiti, signs or messages in public or private communications.

“We consider these reforms to be a clear attempt at censorship of media,” the El Salvador Journalists’ Association said in a statement. “Prohibiting journalism from reporting the reality in which thousands of people inhabiting these gang-controlled communities live… will create an illusion that is not faithful to the truth.”

On 16th March 2022, the IACHR held a hearing on “the human rights situation in the context of cybersurveillance in El Salvador.” Civil society organisations and journalists spoke out about the use of NSO Group’s Pegasus spyware against journalists and members of civil society, revealed by Amnesty International, Access Now and Citizen Lab in early January 2022. They also discussed legislative reforms criminalising investigative journalism.

During the hearing, a government representative denied that the government had conducted cybersurveillance and claimed that the use of Pegasus was under investigation. However, civil society and IACHR representatives questioned the government’s claims and posed several questions on what has been done regarding cybersurveillance. The president of the IACHR, Julissa Mantilla Falcón, called on the Salvadoran government to allow a visit by experts to assess the situation of freedom of expression in the country.

As gang-related violence broke out in late March 2022, public officials attacked journalists who reported the rise in homicides in El Salvador. Public officials, including Vice-President Félix Ulloa and legislator Romeo Auerbach, disparaged and delegitimised the journalistic work of media outlets such as El Diario de Hoy and La Prensa Gráfica, who reported on the country’s wave of murders and alleged power abuses as the government arrested almost 6,000 people during the state of exception.

The officials and their supporters vilified news outlets and reporters, including with unfounded accusations that they sympathise with gangs or “advertise” them. On Twitter, Ulloa insinuated that news outlets were sponsored by foreign powers and that they should be banned in El Salvador. Several journalists received threats and insulting messages from government supporters.

On 3rd April 2022, President Bukele published a message on Twitter alleging without evidence that “donors, drug traffickers, corrupt politicians and judges, ‘human rights’ NGOs, the ‘international community’, the IACHR, journalists and Open Society media” were “partners” of criminal gangs. Ruling party legislator Jorge Castro commented on the post, saying that legal reforms pushed for by the government would mean these groups would be considered terrorists.

Civil society group WOLA warned that the government of El Salvador had launched a media campaign against civil society organisations, including direct harassment from the inner circles of President Bukele himself, as gang-related violence in the country increased. On 28th March 2022, for instance, Bukele responded to a publication by a civil society activist with accusations that international groups “are not interested in the victims, they only defend murderers.”

Regional coalition and CIVICUS Member, the Latin American and Caribbean Network for Democracy (Redlad) reported being targeted by online attacks on Twitter, with users replicating stigmatisation produced by authorities. Redlad said stigmatisation endangers the work, life and integrity of civil society organisations and human rights defenders, and called on authorities to stop stigmatising these actors. They also urged the international community, especially the Inter-American Rights System and the Organization of American States (OAS), to condemn the vilification led by Salvadoran authorities as well as the disproportionate measures taken during the state of exception.

In a separate development, on 29th March 2022 human rights defender Roselia Elvira Rivas Alfaro was beaten and detained by the police and the armed forces. Rivas Alfaro is the president of the Asociación de Desarrollo Comunal (Communal Development Association - ADESCO) in the Terciopelo de Jiquilisco community, Usulután. As reported by the Red Salvadoreña de Defensoras de Derechos Humanos (Salvadoran Women Human Rights Defenders Network), the defender was at home when five police officers and three members of the armed forces arrived; she began to film them, and a police officer threatened her over the recording. The officers then took her mobile phone, pushed her to the ground, beat her and detained her. Police later told her family that she had been detained for alleged “resistance” and “criminal association.”

On 9th February 2022, civil society groups demonstrated in front of the Legislative Assembly in San Salvador to protest the Bukele government’s authoritarianism. The protesters recalled 9th February 2020, when President Bukele marched into the legislature with armed soldiers, in an attempt to pressure lawmakers to sign off on his security policies. With the slogan “9FNuncaMás” (“Never Again 9F”), the protesters gathered to denounce democratic backsliding in El Salvador. They left flowers and banners at a barricade that stopped them from reaching the Assembly’s building, and held signs with messages such as “Cannot Forget 9F, more books and less guns” and “No dictator will erase our memory.”

On 6th March 2022, thousands of women marched in San Salvador against El Salvador’s total ban on abortions and its high femicide rate. The demonstration marked International Women’s Day, 8th March, with women demanding more action to protect women from violence and the legalisation of abortion in cases of rape, when the pregnancy is not viable, or the woman’s life is at risk. Abortion is a crime in El Salvador, with no exceptions, and Salvadoran women accused of having had abortions have been convicted of murder, sometimes with prison terms of up to 40 years.