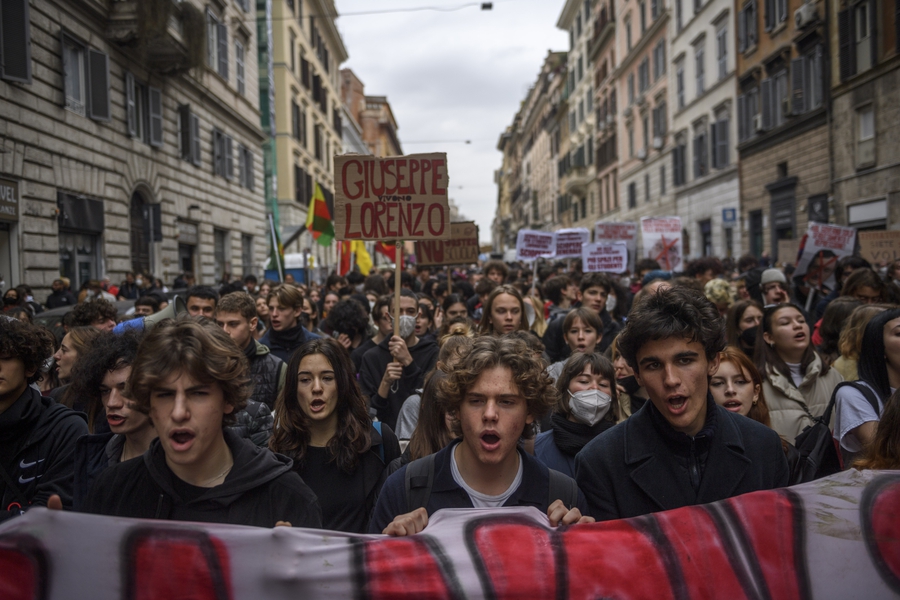 Youth protest the death of Lorenzo Parelli, who died during an unpaid internship (Photo by Antonio Masiello/Getty Images).

2022 budget law detrimental to the third sector in Italy

In December 2021 the Italian government approved the budget law for 2022. On that occasion, CSOs, including the Third Sector Forum (Forum del Terzo Settore) and the cultural association ARCI, pointed out the negative effects which some of the measures foreseen could have on civil society organisations.

Specifically, the Tax Decree introducing compulsory VAT for associations and organisations that do not carry out commercial activities would be particularly detrimental and burdensome on them. This measure has not been approved for 2022, but it was not permanently eliminated either; in fact, it was postponed to 2024.

In addition, the regional tax on productive activities was not reduced for CSOs, while it was reduced for the for-profit sector. The spokesperson of the Third Sector Forum, Vanessa Pallucchi, declared that the government had promised a consultation with CSOs to find a solution to the fiscal matters that hamper the functioning of the third sector in Italy, but this dialogue never started. She also added that the social added value of CSOs is now widely recognised, especially in the light of the vital role they played during the pandemic, but that this does not translate into concrete support for these actors.

Police charge youth protesting the death of a fellow student

At the end of January 2021, police used batons and charged students protesting in Milan and Turin for the death of Lorenzo Parelli - an 18-year-old student – who lost his life on the last day of his unpaid curricular traineeship. Several young protesters, many of whom were under 18, were hurt in the clashes with the police and some had to be taken to hospital. Videos of the events show the students protesting and the police responding with excessive and disproportionate force, hitting the demonstrators on the head, back and legs.

In Milan, the police threatened to charge the students, who were protesting peacefully, if they kept throwing eggs at them, which were coloured in red and were used as symbols of the blood of the student who lost his life. A protester threw one egg, which did not even reach the officers, but which was considered enough by the police to attack the students. In Turin the police reported that they had to charge the protesters because they intended to break through police lines with a white van. Students reported that the van was not moving as its back door was open and it was being used to carry speakers. In both cases students report that police stopped the protest a few metres after its start. As a matter of fact, a directive issued in November 2021 by the Ministry of the Interior permitted only static protests.

A similar approach to the one used by police in Milan and Turin was also observed in Rome and Naples, where other demonstrations for adequate occupational health and safety and fair conditions of curricular traineeships were held. Many more protests were organised across the whole country in the following days.

The Italian Left (Sinistra Italiana) party filed a Parliamentary inquiry to ask Minister of the Interior Luciana Lamorgese for clarification concerning the events and what approach the Ministry intended to adopt for future demonstrations involving students, as well as inviting the authorities to apologise to the protesters. After days of silence, Lamorgese admitted that police had charged the students, but added that some protests had been infiltrated by violent groups and that the right to protest needs to be compromised with the need to protect the police from violence and attacks.

On 19th January 2022, anti-vax group “Noi siamo il popolo” (we are the people) sent a signed threatening letter accompanied by a bullet to the daily newspaper Alto Adige. The letter threatened the journalists of Alto Adige and their families with death if the newspaper did not stop spreading what the group consider to be false information regarding COVID-19 vaccinations. The letter also addressed Prime Minister Mario Draghi and asked for the abolition of the vaccine mandate and of the Green Pass.

An official investigation was opened by the police, also with reference to previous incidents of death threats received by the newspaper. The journalists of Alto Adige reacted to the episode saying that this will not stop them from carrying out their work. The regional association of journalists and the regional union called the threats a “terroristic attack” and expressed their solidarity with the journalists involved.

Alberto Faustini, director of Alto Adige, said in his own newspaper:

“We are sorry that doing our duty - which is to inform correctly, distinguishing the words of scientists from the impromptu opinions of those who see who knows what plots behind our work - produces manifestations of hatred, threats and poison. The country needs the opposite. Balance and trust. In science. In institutions. In the world of information. We will continue our work more than ever. Without being intimidated. Without bending over. But we will watch our backs, since there are those who try to hit us from behind."