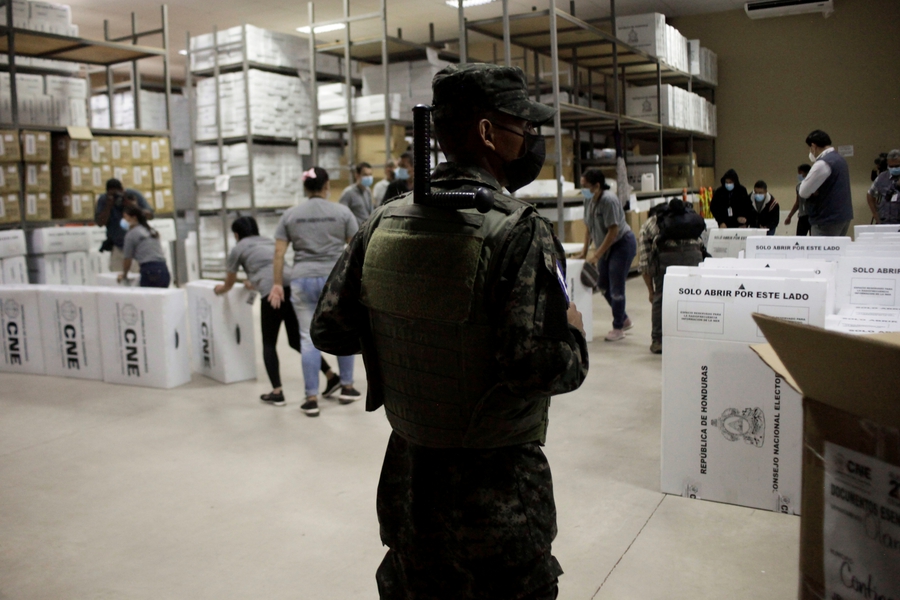 Soldier keeps watch as voting materials are prepared for distribution ahead of elections. Nov 2021, REUTERS/Fredy Rodriguez

Concerning changes to Criminal Code and other laws

On 7th October 2021, the National Assembly approved new reforms to Honduras’ Criminal Code, the Code of Criminal Procedure and the Law against Money Laundering. Civil society organisations expressed concern about some of the modifications, including the increase in penalties for those found guilty of “usurpation.” These charges carried a penalty from one to four years in prison and may now result in four to six years of jailtime.

According to several civil society organisations in Honduras, this type of charge is widely used to silence and demobilise protests, particularly those engaged in struggles for land rights, and to associate protesters with criminal activities. Other modifications to penal types such as “forced displacement” and “preventive eviction” would also have implications for the rights of groups engaged in land rights struggles, particularly campesino and Indigenous groups, criminalising and restricting their advocacy.

In addition, the National Assembly also modified the Law against Money Laundering, making it more difficult to investigate and prosecute corruption cases. The changes also add civil society organisations investigating corruption among those included in the definition of “persons politically exposed,” which may hinder their work promoting accountability.

The Office of the United Nations High Commissioner for Human Rights (OHCHR) also expressed concern about these reforms, saying some of the changes infringe on Honduras’ human rights obligations, limit investigations in cases of corruption and restrict civic space. In addition, the High Commissioner’s Office said the changes exacerbate the criminalisation already faced by those who defend the land and environment in Honduras.

Early on 14th November 2021, police officers arrested human rights defender Lucía Enamorado of the Red Nacional de Defensoras de Derechos Humanos en Honduras (National Network of Women Human Rights Defenders of Honduras - RNDDH) and Nancy García of campesino women’s organisation Codimca. According to IM-Defensoras, the arrest took place as officers detained a group of young people in Tegucigalpa, including Enamorado’s boyfriend who during the incident said the Honduran police conducted enforced disappearances. The organisation reported that police officers assaulted and arrested Enamorado after she questioned why they were being detained. Officers reportedly claimed they had expressed a lack of respect for authorities. The police also obstructed the work of another human rights defender who was attempting to follow up on the case. The defenders were released after a few hours.

In a separate development, in November 2021 the Trujillo Tribunal moved the trial of Guapinol water defenders to La Ceiba – a decision that groups following the case said was arbitrary and meant to prevent mobilisation of activists calling for the defenders’ release. They called for the trial to be moved to Tegucigalpa, where there would be more conditions for public scrutiny. The group also said that, in the weeks preceding the trial scheduled for early December 2021, there was an increase in defamation campaigns and threats to the families of the detained defenders and other community members who have actively denounced illegal mining in the region. This includes surveillance groups monitoring defenders’ homes, smear campaigns against defenders and their families and an increase in robberies in the community.

On 21st October 2021, civil society group C-Libre published an overview of social protests in Honduras for the third quarter of 2021. According to the report’s findings, there were 306 protests in the country up to September 2021, an increase in protests compared to a total of 308 protests registered in 2020. July was the month with the highest number of protests in 2021, with 79 demonstrations documented by the organisation. 30 protests were registered in September 2021.

The main issue leading Honduras’ population to the streets was the creation of 23 Zones of Employment and Economic Development (ZEDE). Grievances against these zones included the lack of prior and informed consultation on their creation, violating the rights of Indigenous communities. Issues related to the pandemic, to labour rights and to cases of violence also led to protests. C-Libre’s report warned of the risks of electoral violence in the last months of the year, in the context of upcoming general elections.

On 3rd November 2021, journalist Ana Verónica Pineda of the digital newspaper Criterio.hn reported that during a routine maintenance service to her vehicle the mechanic told her that someone had intentionally manipulated her car to sabotage it. The journalist said she decided to make this public because of the increased vulnerability of journalists working in the context of presidential elections. C-Libre said Pineda received threatening messages two months before this incident, which they verified.

On 16th November 2021, ahead of the general elections in Honduras on 28th November, Amnesty International published an open letter to the presidential candidates and to the government. In the document, the organisation shares seven points necessary to build a more just and human rights-based country. These include respect for the full exercise of the rights to freedom of expression, assembly and social protest, as well as the need to create a safe and enabling environment for the defence of human rights.

Amnesty International also highlighted that these elections take place in a context of concern over the violent repression of mass protests during the previous elections in 2017. At the time, the OHCHR observed that several members of the Military Police and the Army used excessive, sometimes even lethal, force to disperse the demonstrations, and documented the deaths of at least 23 people, among other human rights violations. Erika Guevara-Rosas, Amnesty’s regional director for the Americas, declared:

“It is unacceptable that Honduras should have to face another wave of repression like that of 2017. The Honduran authorities must guarantee human rights during the electoral process, including the rights to freedom of expression, assembly and peaceful protest, and refrain from using force to repress citizens.”