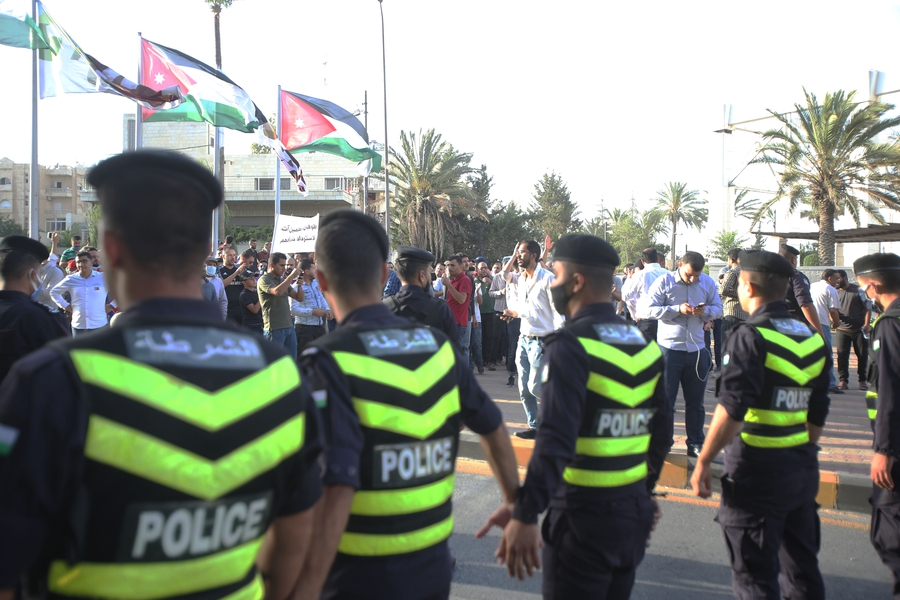 Authorities have continued their crackdown on the largest teachers union (Photo by Jordan Pix/Getty Images).

In April 2021, an alleged plot said to involve Prince Hamzah, the half-brother of King Abdullah II, sparked controversy in the country. Bassem Awadallah, a former royal court chief in Jordan who became an adviser to the Saudi crown prince, and the king’s cousin Sharif Hassan bin Zeid were found guilty of sedition by a closed security court and sentenced to 15 years in prison. Fourteen other detainees who are associates and friends of Prince Hamzah were released several weeks after their arrests. While Prince Hamzah did not go on trial, he was placed under house arrest, after which he pledged loyalty to the King. The King had stripped Prince Hamzah of the title of crown prince in 2004, after which he became a vocal critic of Jordan’s leadership, accusing it of corruption, nepotism and authoritarian rule. The alleged coup was following by restrictions on civic space, which included a gag order which prevented the media from reporting on these developments, which were deemed a “family affair” by the palace. The order came from the prosecutor general of Amman, who stated: "In order to keep the security services’ investigation into Prince Hamzah and the others secret, [it is decided] to ban the publication of anything related to this inquiry at this stage.” The ban on publication extended to all audiovisual media and social networks, including all images or video clips relating to this subject.

During November 2021, proposed amendments were made to the Jordanian Constitution, sparking criticism. Concerns have been raised that this will increase the powers of the King through forming a National Security Council, which may lead to creating a political body parallel to the legislative and executive powers in the country. Additionally, amendments are aimed at weakening the democratic process, while the accountability of the government’s decision-makers will be limited.

An enabling environment for civil society

A key concern for civil society in 2021 was the need to amend the legal and regulatory framework governing organisations in order to reach a supportive and enhancing environment. In this regard the establishment of a committee in March 2021 to prepare a new bill revising the 2008 Associations Law No. 51 and the draft laws that were previously proposed in 2014, 2015 and 2019 was a welcome step. However, according to an advocacy letter sent by the Phenix Center to the Minister of Social Development, concrete steps are required to ensure the independence of civil society and to enhance an enabling environment. It recommends:

Ahmad Awad, the Director of Phenix Center, stated that Jordan continues to need more CSOs, as there are merely 6,500 non-profit organisations and non-governmental associations in the Kingdom. He pointed to the government’s undue restrictions on CSOs – such as requiring prior approval for various activities and actions – as an obstacle to achieving more open civic space.

As previously reported on the Monitor, the Jordanian Teachers Syndicate (JTS), the country’s largest union country, faced repressions after it was dissolved, with the closure of its headquarters for two years.

Ahmad Awad, Director of the Phenix Center for Economic and Informatics Studies in Amman referred to “what happened with the Teachers Association and its leadership are clear violations of human rights principles, and in particular the freedom of association.” In an interview Awad further links the arbitrary treatment of the union and its members with a general decline in public freedoms in Jordan, stating “the space for democratic practices [has] narrowed.”

The union has responded by staging protests, including hunger strikes. In November 2021, the governor of the capital Amman prevented the JTS from holding a press conference that was meant to discuss several issues, including early retirement, arbitrary dismissal and penalties issued against activists. Additionally, activists from the union have faced ongoing intimidation, harassment and arbitrarily detentions. The following cases were documented:

Separately, in July 2021 a court acquitted Deputy Head of the JTS, Nasser Al-Nawasrah, on charges of “misuse of power and threatening to inflict harm” which relate to publication of videos of him talking about matters related to the teachers’ union.

As previously reported, in 2020, the government passed a defence law which gives overly broad powers to the Prime Minister and has been used to curtail civic freedoms. During November 2021, people took to the streets to protest against the law and against rising commodities and fuel prices in Jordan. Protesters chanted: “we can live in freedom.” There was a heavy presence of Jordanian security forces, who reportedly surrounded the area to prevent additional protesters from joining the march.

According to a report by Freedom House, internet freedom has significantly declined, with authorities limiting access to information through blocking the internet, including social media, when there are politically sensitive developments:

A report by the Centre for Protection and Freedom of Journalists titled “Media Freedom Index in Jordan for the year 2020”, noted that the media environment in Jordan has become restricted, with journalists self-censoring. The index documented 111 violations, adding that the COVID-19 pandemic had added to these violations. Journalists face lawsuits, arrests or intimidation. The report notes “frequent arrest of journalists has increased self-censorship for fear of being prosecuted or arrested”. The decline in ranking on the World Press Freedom Index compiled by Reporters Without Borders (RSF) also reflected the situation in the country, with the situation for journalism defined as “worrying” by the founder and member of the Centre for Defending Freedoms of Journalists (CDFJ) Nidal Mansour, who added that there is an absence of a legislative framework that ensures the flow of credible, trusted and diverse information produced by different media outlets.

Calls for repeal of lèse-majesté law

On 2nd October 2021, Kind Abdullah granted a special pardon tothose convicted of lèse-majesté, the crime of insulting the head of state. The pardon was directed to be put into effect “as soon as possible” and would apply to over 70 people. The International Press Institute welcomed the decision.

“The decision to pardon all those convicted for lèse-majesté is a welcome step in acknowledging that laws criminalizing heads of state and others in power have no place in a democratic country. At the same time, the move underscores the need for further steps to provide full legal protection for media freedom in Jordan and ensure that the conditions exist for free political debate in the country and for journalists to scrutinize the country’s rulers without fear of retaliation. For this reason, IPI calls for a full repeal of the lèse-majesté law and other laws unduly restricting media freedom,”- IPI Executive Director Barbara Trionfi.

🇯🇴 #Jordan: Recent lèse-majesté pardons are a welcome step in acknowledging that laws criminalizing heads of state and others in power have no place in a democratic country. ⤵️

Etaf Roudan, manager of Radio al-Balad in Jordan, said that free speech must be decriminalised in the country. There are currently around 20 laws which restrict freedom of speech in the country.

The Royal decree on the issuance of a special pardon for those convicted of lèse-majesté was approved on 14th October 2021, resulting in the sentences being dropped of 155 people who were found guilty of insulting or mocking the Jordanian king.