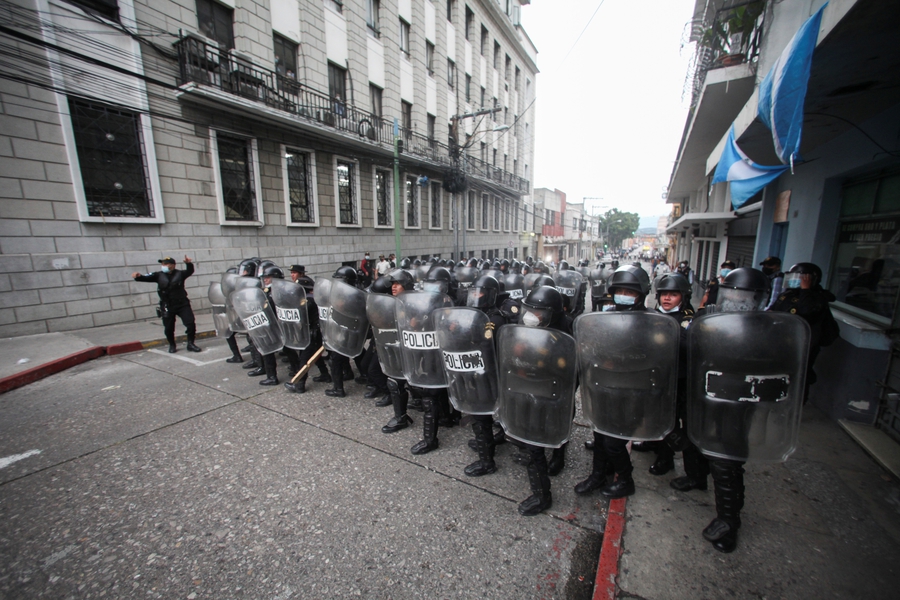 Protests against racism and discrimination

On 12th October 2021, hundreds of people marched in Guatemala City to denounce racism and discrimination against Indigenous peoples, as part of a Day of Indigenous, Black and Popular Dignity and Resistance. Several countries in the Americas hold commemorative holidays on the date, marking Christopher Columbus’ arrival on the continent in the 15th century. The protest was convened by the Asamblea Social y Popular (Popular and Social Assembly) and joined by Indigenous and campesino organisations. The march was mostly peaceful, but some protesters vandalised monuments and statues along the way. Some protesters attempted to pull down a statue of Christopher Columbus and some beheaded a statue of José María Reina Barrios, who presided over Guatemala from 1892 to 1898. One person is under investigation for allegedly causing damage to national patrimony during the protest.

In October 2021, Indigenous peoples in El Estor, Izabal department, protested environmental damage caused by nickel mining company Compania Guatemalteca de Niquel, a subsidiary of Solway Investment Group. The mine’s operation has been suspended by Guatemala’s Constitutional Court, but a processing plant owned by the group has continued to operate despite the court ruling. For nearly three weeks, Q’eqchi’ protesters blocked a roadway leading into the municipality to stop the passage of trucks engaged in mining activities. On 22nd October 2021, police repressed the blockade using force and tear gas. During the crackdown, four police officers sustained gunshot wounds.

Q’eqchi’ leaders said that some protesters threw rocks at police but that armed assailants who shot at police were not involved in any way in the protest. On 24th October, the Guatemalan government decreed a state of siege in the municipality and issued a public statement accusing the protesters of shooting police officers “after 17 days of illegal blockades by a small group of people who it is assumed do not live in the area.” In their statement, the government also discredited the work of the country’s Human Rights Ombudsperson, who had condemned the violent disruption of the protest. During the state of siege, peaceful assembly rights were restricted and hundreds of military and police officers were deployed to the region.

As reported by IM-Defensoras, on 24th October police also raided the premises of Indigenous rights organisation Defensoría Q’eqchi’ and the community radio station Xyaab' Tzuultaq'a, imposing censorship. Guatemala’s Ombudsperson also received reports of intimidation and harassment of journalists covering the situation in Izabal, which is further detailed in the ‘Expression’ section of this update.

On 25th October 2021, Indigenous authorities marched in Guatemala City to demand the withdrawal of the siege and the closure of the nickel mine. During the protest, the leaders denounced that the government’s efforts to consult Indigenous peoples in order to resolve the mining licensing situation have been flawed and biased, failing to recognise legitimate Indigenous representatives.

On 4th November 2021, the Inter-American Commission on Human Rights (IACHR) issued a statement condemning the use of excessive force against protesters and members of Maya Q’eqchi’ communities as well as acts of repression against journalists and media outlets recorded in the municipality.

On 19th October 2021, a march organised by military veterans in Guatemala City ended in violence and clashes with anti-riot police. The group demonstrated to demand the approval of legislation to compensate veterans for their participation in the country’s armed conflict. When arriving in front of Congress, protesters reportedly blocked legislative staff from leaving the building, stormed the parking lot and set fire to vehicles. Congressional staff were evacuated and anti-riot police intervened using tear gas. According to the BBC, several journalists were injured with rocks thrown by the military protesters.

As reported in the Peaceful Assembly section of this update, during the march two statues were vandalised. In the following days, the group Guatemala Inmortal filed a criminal complaint against ACOGUATE and the CUC for the crimes of “sedition”, “attack against national security” and “depredation of cultural heritage” in connection with these incidents. In addition, an attorney for Guatemala City requested an investigation by the Public Prosecutor’s Office into members of ACOGUATE. Since the protest, the organisations have faced a smear campaign on social media, including publications sharing photos of the organisation’s staff, sending them threatening messages and demanding their expulsion from the country.

During the 48th session of the Human Rights Council, the UN Secretary-General presented the report “Cooperation with the United Nations, its representatives and mechanisms in the field of human rights” expressing concern over continued reports of intimidation and reprisals against people and groups that cooperate with the UN and its mechanisms in the field of human rights. In relation to Guatemala, the report referred to reprisals against judges and prosecutors, including those who work on cases investigated by the International Commission against Impunity (CICIG). Acts of intimidation and reprisals have included requests to waive the immunity of judges and magistrates from criminal prosecution, the misuse of legal remedies/tools such as amparo actions, disciplinary proceedings and defamation campaigns on social media.

At the end of October 2021, the Inter-American Commission on Human Rights’ (IACHR) Special Rapporteur on Freedom of Expression expressed concern about attacks, threats and intimidation against journalists in Guatemala. The Special Rapporteur’s Office said they had received a number of reports of attacks in the period, in particular around the coverage of anti-mining protests in El Estor. One journalist was beaten and had his equipment taken, and a local radio station was reportedly raided by police. As reported by the Committee to Protect Journalists (CPJ), police also raided the homes of at least two journalists in connection with those protests and have harassed members of the press covering the demonstrations.

On 9th November 2021, journalists’ association Asociación de Periodistas de Guatemala (APG) condemned the harassment and censorship of three journalists in Sololá. According to APG, members of the Sololá Community Development Council intimidated reporters covering the court hearings on a criminal case against a former Council leader. Members of the Council reportedly banned a journalist, warning that he shouldn’t be there, insulting and pushing him. Community authorities also visited the residences of two other reporters, recriminating them for publishing materials related to the incident and the court hearings. According to Guatemala’s Ombudsperson, at least six journalists in Sololá were threatened and intimidated in early November 2021.

Separately, the regional press association Asociación de Prensa Quetzalteca (APQ) condemned the detention of journalist Rubén Jocol by police officers after he recorded an arrest in Ciudad Altense. According to the APQ, Jocol was forced to delete the material he had recorded and was accused of obstructing police procedure.