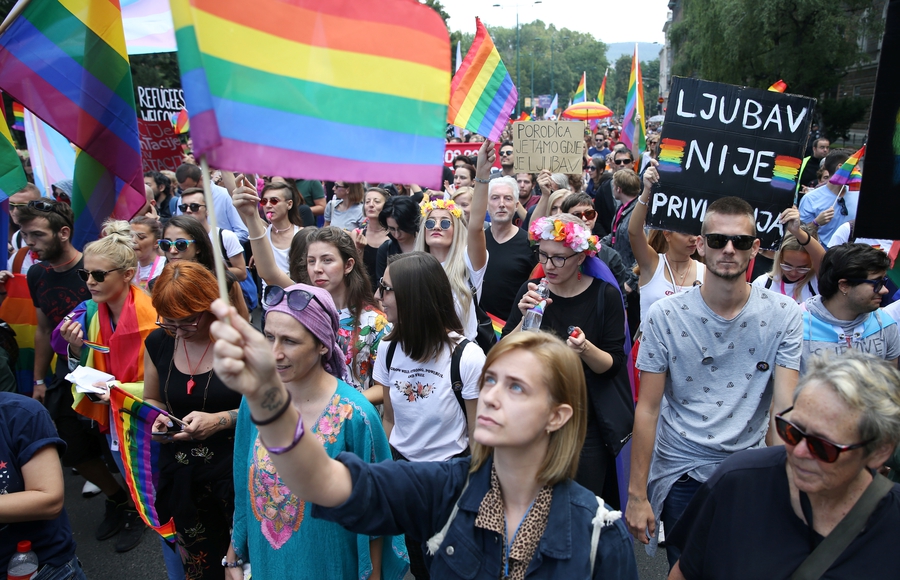 A victory for Pride organisers over costs related to march (REUTERS/Dado Ruvic via Gallo Images).

A victory for LGBTI Pride organisers

The LGBT Pride parade took place for the second time in Sarajevo, under tight security measures to avoid incidents which potentially involve counter protesters from conservative organisations. The march was peaceful and was attended by members of the European diplomatic missions in a show of support for the struggle for LGBTI rights. A counter protest was also staged by a religious group known as “Faith, People, State”. According to the Sarajevo Open Center, the decision of the Sarajevo Canton, Municipality of Centar, and the City of Sarajevo to cover the costs of additional security measures at the pride march, which were ordered by the Ministry of the Interior of Sarajevo Canton, is a remarkable victory when it comes to the right to freedom of peaceful assembly of LGBTI people. Imposing an obligation on the organisers to cover the costs of ensuring a peaceful gathering and imposing the big financial burden that such measures require was one of the biggest challengesof organising the Pride Parade itself. Legislation in BiH imposes responsibility on organisers of gatherings for segments that should fall under the competence of police bodies. This includes liability for damage caused by other persons, duty to maintain public order and peace, and the obligation to ensure appropriate medical and fire protection measures.

At a conference on freedom of peaceful assembly in BiH organised by the Sarajevo Open Center, Uglješa Vuković, a representative from Transparency International BiH, welcomed the decision of the institutions to cover the costs of the march instead of organisers, but noted there is a need to have this legally regulated so that it is not dependent on the political will of individuals. He also noted that in various parts of Bosnia the right to this freedom depends on how much the police agencies are independent from political influence.

Attacks against journalists and media outlets

A series of hacker attacks on the news portal nezavisne.com, which lasted for several days from 10th August has been deemed a violation of journalist rights and media freedom by the Association of Bosnian Journalists. The association called on the Internal Ministry of Republika Srpska to investigate the DDoS attacks and not repeat the handling of an earlier hacking case against outlets Žurnal and Nomad in February 2021, where the perpetrators have not been identified to date.

In another development, the 27th August 2021 marked the three-year anniversary of the attack against Vladimir Kovacevic, journalist at RTVBN and Gerila info. However, those who ordered the attack are yet to be identified. Kovacevic was beaten by two men in front of his house in 2018, which the Banja Luka prosecution defined as attempted murder. While the two culprits were sentenced to several years in prison, Kovacevic believes political entities were behind the attack, but the internal minister Dragan Lukac claims there is no evidence of this.

After two years of legal process, the person who attacked journalist Husein Orucevic received a fine for verbal attack and for damage to the journalist’s equipment. During the incident water was spilled on Orucevic and his dictaphone was broken.

The Association of Bosnian Journalists reports that the municipality of Banja Luka continuously ignores media requests for information about its budget expenses, adding that the mayor of Banja Luka, Drasko Stanivukovic, is slandering journalists in press conferences. The association called for greater transparency and respect for the public function by the mayor.

“Instead of labeling and slandering media representatives at press conferences, Mayor Stanivuković should start behaving in accordance with the public function he performs and answer numerous inquiries that journalists have been sending him for months. Transparency and freedom of access to information are imperatives of the work of public institutions and it is necessary that government representatives, all those who perform public functions, commit to proactive transparency and self-initiated publication of data such as public procurement contracts, budget reports and legislation.”

The European Federation of Journalists condemned the nationalist hate speech campaign on social media directed at Borka Rudic, the general secretary of the Association of Bosnian Journalists, and Lejla Turcilo, head of the Department of Journalism and Communication at the Faculty of Political Sciences. It called on the government to investigate the incident.

“We express our support to Lejla Turcilo and Borka Rudic. Online harassment and smear campaigns are not just words. We call on the BiH authorities to publicly condemn the brutal campaign and immediately investigate the case. This can’t go on any longer,”- Ricardo Gutiérrez, the EFJ General Secretary.

In a positive development, on 12th July 2021, freelance journalist Ajdin Kamber was acquitted by the Bihac court after being prosecuted for breaking COVID-19 measures in April 2020. Kamber was reporting on forced pushbacks from Croatia when he was arrested by the police. Even after he showed police his media accreditation, the journalist was detained and prosecuted. After his acquittal, in an interview for media.ba, Kamber commented that the inefficiency of legal institutions is one of the biggest problems in Bosnian society.

In a separate development, despite a 2014 law protecting individuals who reveal corruption, whistleblowers Nermin Alesevic and Emir Mesic were put on trial for publishing tapes of corrupt deals with government officials. The whistleblowers bemoan the lack of support in their struggle, especially by the unions. The case once again reinforces the need to strengthen protections for whistleblowers.