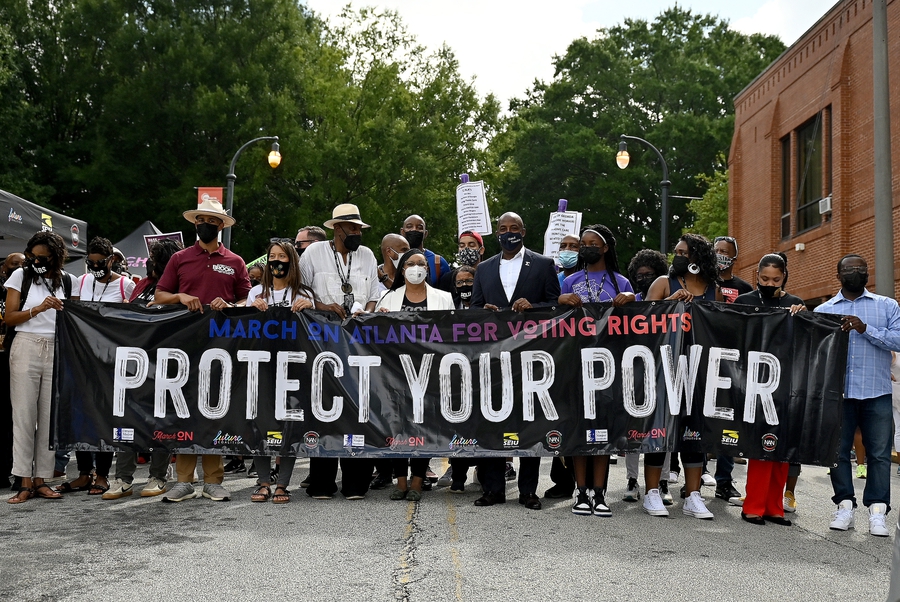 Protesters at March On For Voting Rights in Atlanta, 28 August 2021. (Photo by Derek White/Getty Images).

When our votes are under attack, what do we do!? Stand up. Fight back. #VotingRightsMarch pic.twitter.com/QZCHzE3z83

Several lawmakers and activists were arrested while protesting for voting rights in Washington D.C. in July 2021. The arrests took place during demonstrations calling on the Senate to pass the For the People Act, Democrats’ election reform bill, and the John Lewis Voting Rights Advancement Act. On 15th July 2021, Representative Joyce Beatty, who serves as the chair of the Congressional Black Caucus, shared a photo on Twitter of officers putting a zip-tie on her and escorting her out of the U.S. Capitol building.

Similarly, Rep. Hank Johnson was arrested by Capitol police on 22nd July 2021 for “unlawfully demonstrating” outside the Hart Senate Office Building. Johnson had spoken earlier at a rally organised by the group Black Voters Matter to protest Senate inaction on voting rights legislation and filibuster reform. The group’s co-founder Cliff Albright was also arrested at the demonstration, as well as Rashad Robinson, president of civil society organisation Color of Change.

In a related development, marking the 58th anniversary of the civil rights movement’s March on Washington, on 28th August 2021 thousands of people participated in the March On For Voting Rights calling on Congress to pass election reform bills. The crowd shouted, “No justice, no peace!” and “Black Lives Matter” as people also rallied for racial justice to demand statehood for the District and against gun violence. “We must protest, we must rally, we must organise and mobilise and sit in and stand up,” said Rev. Liz Theoharis who co-chairs the Poor People's Campaign. “Not just for a day. Not just for a summer. But until all people are housed, until all people are fed, until all people earn a living wage.”

In August 2021, the Movement for Black Lives published a new report showing the federal government deliberately targeted Black Lives Matter protesters through heavy-handed criminal prosecutions in an attempt to disrupt the racial justice movement that swept the nation in the wake of the Minneapolis police killing of George Floyd.According to their findings, by charging protesters with federal crimes – that carry harsher penalties for conduct that normally would have been prosecuted in state courts, if at all – the government perpetuated a long history of attacking Black-led organising and movement-building. Rooted in the country’s structural racism, the prosecution of BLM protesters continues a century-long practice by the federal government to suppress Black social movements using surveillance tactics and harsh penalties. The report states:

“The empirical data and findings in this report largely corroborate what Black organisers have long known intellectually, intuitively, and from lived experience about the federal government’s disparate policing and prosecution of racial justice protests and related activity.”

Cuban Americans in Miami supporting the people of Cuba as they protest in their country. ⁦@nbc6⁩ #SOSCuba pic.twitter.com/ReAZauR8lH

Throughout July 2021, hundreds of people across Florida participated in demonstrations in solidarity with the people of Cuba who demonstrated against the island’s government. On 14th July 2021, demonstrators shut down a stretch of a major South Florida expressway while hundreds gathered in a nearby park waving flags and cheering on the efforts of Cuba’s protesters. At a rally in Orlando on 17th July 2021, people wore white T-shirts bearing the words “SOS Cuba,” while others in the crowd called for U.S. military intervention.

On 15th August 2021, more than 300 demonstrators gathered outside the White House in response to the U.S. evacuation from Afghanistan and the Taliban taking control of Kabul. Demonstrators, many of them Afghans and Afghan Americans, converged on Lafayette Park to comfort one another and demand President Biden do more to stabilise the situation. Some waved the Afghanistan flag while others held signs with messages like, “Save Afghan lives”.

Throughout the reporting period, several protests were held against COVID-related health restrictions including vaccine and mask mandates. In Delaware, for example, about 300 people rallied outside a hospital to protest a decision requiring hospital employees to get vaccinated. In Oklahoma, at a protest dubbed the Oklahoma Freedom Rally, hundreds gathered at the Statehouse to protest mask and vaccine mandates. “I do not want to see us be mandated for masks or vaccines because that is our right to choose what's best for us,” one protester said. In Washington D.C., House Republicans staged a mask-less protest against the latest COVID-19 protocols in Congress, put in place amid a spike in new infections in the D.C. and around the country.

On 15th July 2021, two persons were stabbed at a protest against coronavirus vaccines in Los Angeles after a fight broke out between anti-vaccine demonstrators and counter-protesters. Calling for “medical freedom”, several hundred people had rallied outside City Hall to protest the vaccine and other health restrictions imposed by state and local officials. KPCC radio reporter Frank Stoltze was also threatened, shoved and kicked by anti-vaccine protesters.

In a separate development, on 31st July 2021, Rep. Cori Bush and her staff spent the night on the U.S. Capitol steps to protest the end of a nationwide programme to prevent evictions during the pandemic. Bush remained outside the Capitol the following day urging an online audience to demand that Washington stop the moratorium from expiring.

There’s been a beautiful ceremony in front of the Minnesota state Capitol led by Indigenous elders and water protectors all day. We are fortunate to have been in community with everyone here.

On 27th August 2021, at least 4 people were arrested for protesting on Minnesota Capitol grounds. Earlier that week, about a thousand people gathered near the Minnesota Capitol for a week of action to oppose the pipeline which they said violates Native American treaty rights, will aggravate the climate crisis and could contaminate areas where Indigenous people hunt and fish. When dispersing the protest on the 27th, Minnesota troopers reportedly carried demonstrators onto a bus as dozens of law enforcement officers surrounded the remaining protesters.

According to news reports, Enbridge is paying the salaries of the police officers who are providing security during the construction of the pipeline, as part of a deal with the state. More than 800 people have been arrested or cited in the state since November 2020, when the Minnesota Department of Natural Resources and the Minnesota Pollution Control Agency (MPCA) approved the Line 3 permit.

On 17th July 2021, at least 40 people were arrested at a demonstration that turned violent near a Los Angeles spa. The protest was organised by far-right groups after the spa defended its policy of allowing transgender customers in its facilities. The anti-trans rights demonstrators were calling for a boycott of the business. Police declared the protest an unlawful assembly after some in the crowd allegedly threw smoke bombs and other objects at the officers. Police beat protesters with batons and fired bean bag rounds and other projectiles, according to media reports. A video shared online showed a police officer firing a less-lethal round at a protester at close range.

On 22nd August 2021, gunfire erupted at an event by white nationalist group Proud Boys in Portland a day after local police announced they would not intervene between the far-right group and counter-protesters. The right-wing rally drew over 100 people in the parking lot of a former department store before they reportedly began attacking counter-protesters in nearby streets. A far-right protester was arrested after shooting at anti-fascist protesters with a handgun.

On 2nd August 2021, lawmakers in Nassau County, New York, approved a bill allowing fines and lawsuits against anyone who harasses or injures a first responder, which includes police officers. The law establishes fines of up to U$50,000 while giving first responders the ability to sue the person directly for compensation. Several attorneys attending the hearing predicted the law would be challenged on constitutional grounds.

Independent journalist Gabe Quinones said he was arrested on a charge of grand larceny for allegedly attempting to steal the baton he was struck with. He has a hearing scheduled for July 26: https://t.co/VjHVwuAjvy

An independent photojournalist was arrested for grand larceny after filing an incident report against a police officer who allegedly assaulted him. On 5th July 2021, Gabe Quinones was covering demonstrations at a park in New York City when officers began to clear the area and enforce a curfew. Quinones said an officer ran up behind him as he walked down the sidewalk and shoved him into a wall with his baton. The reporter then filed a complaint against the officer. On 6th July 2021, Quinones said police arrived at his apartment and arrested him, claiming that he had attempted to steal the officer’s baton during the incident. “There’s no humanly possible way that I could have stolen anything,” Quinones said. “I got assaulted by that baton: I didn’t try to steal it. I couldn’t believe what I was hearing when I walked in there.”

On 17th July 2021, a freelance photographer said he and other media members were corralled by police as they covered a protest at a spa in Los Angeles, detailed in the ‘Peaceful Assembly’ section of this update. Joey Scott said he and other journalists were improperly held by police using a crowd-control technique called “kettling”, when officers surround the crowd and restrict them from dispersing. Scott said he was wearing press identification and a helmet with “PRESS” on it but was still threatened with arrest. During the same protest, Guardian reporter Lois Beckett was pushed to the ground by demonstrators.

On 11th August 2021, the U.K. High Court began consideration of the U.S. government’s appeal in the extradition case against Wikileaks publisher Julian Assange. In January 2021, a U.K. court ruled against the United States’ request for extradition, arguing that Assange’s mental health was at risk. Reporters Without Borders’ Director of International Campaigns Rebecca Vincent commented on the preliminary hearing of the U.S.’ appeal: “Today’s arguments made it clear that the US government continues to pursue this case until the very end, but it doesn’t have to be this way. We call again for the Biden administration to drop its appeal and close the case against Julian Assange, which has alarming implications for journalism and press freedom. Assange should be immediately released and certainly not extradited to the United States.” The full appellate hearing will take place from 27th to 28th October 2021.