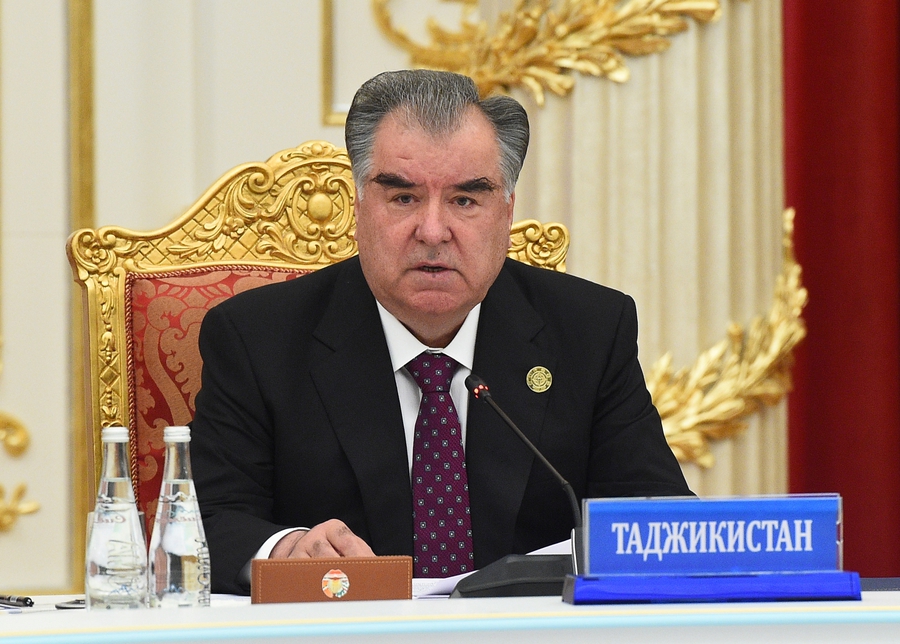 This report, which covers developments affecting the freedoms of expression, association and peaceful assembly in Tajikistan for the period April to July 2021,was prepared by International Partnership for Human Rights (IPHR) for the CIVICUS Monitor.

The muzzling of independent media is part of a broader trend of growing authoritarianism in Tajikistan with the authorities increasingly regarding journalists who ask probing questions, attempt to promote transparency and create space for public debate as a threat to their hold on power.

Recently introduced measures providing for full state control over the country's independent television and radio stations threaten to exacerbate the situation for independent media even further.

In addition, authorities continued to restrict citizens' rights of access to information. Journalists often complained about lack of access to information, while government officials were reluctant to communicate with journalists and many media inquiries wentunanswered. The government introduced a draft law "On Access to Information on the Activities of Courts" which was supported by deputies of the lower chamber of parliament in May 2021. Civil society activists and human rights defenders are concerned that the draft law does not meet international standards and will further restrict journalistic coverage of court processes.

The April 2021 border conflict between Tajikistan and Kyrgyzstan again demonstrated the unwillingness of the relevant authorities to ensure access to information in the country as, during the first nine days of conflict, the authorities failed to disseminate any information about the events or the injuries and casualties, which contributedto the spread of false rumours on social media.

This increasing challenge of access to information, together with the suppression of freedom of expression in connection with reporting on COVID-19, has created a heightened climate of fear among journalists and health workers, making it very difficult to assess the true extent of the pandemic. Up until May 2021, the authorities maintained that no further COVID-19 cases were reported since the President declared Tajikistan’s victory over the infection on 26th January 2021. However, independent media reported that hospitals across the country are treating COVID-19 patients, with doctors being forced not to identify them as such. Laboratories in the country reportedly therefore only issue negative tests.

It was not until late June 2021 that the Ministry of Health admitted that there were new cases of COVID-19, and three weeks later, on 12th July 2021, the government’s Corona virus taskforce announced a total of 13,834 infections and 103 deaths.

Many observers mistrust these official figures and point out that the overall mortality rate showed a very different picture of the situation: In 2020, 8,649 more people died than in 2019.

In a separate development, the tax authorities attempted to narrow the space for civil society by harassing NGOs through the arbitrary application of different tax laws: in January 2021, the tax authorities imposed penalties on the Lawyers’ Association of Pamir (LAP) requiring it to pay income tax on grants received from international structures. Tax inspectors claimed that grants received over the past two years had not been registered with the State Committee on Investments and State Property. However, the Law on Public Associations provides that foreign grants are subject to registration in the “registry of humanitarian assistance to public associations” at the Ministry of Justice and not with the Investment Committee. LAP lodged three court appeals against the Tax Committee ruling and its inspection procedure. Local civil society organisations are concerned that if the LAP does not win the case against the Tax Committee, it could have wider repercussions for other civil society organisations.

Of continuing concern is the persecution of human rights lawyers. On 14th June 2021, human rights lawyer Abdulmajid Rizoyev was sentenced to five and a half years’ imprisonment for "public calls to carry out extremist activity through the media or the Internet". The charges are based on some ironic Facebook posts from 2019 and 2020 which could be linked to the elections, and which the Prosecution alleged were “hidden calls for extremism.”

In July 2021, the Tajikistani Prosecutor General’s Office announced that human rights lawyer and Chairman of the Tajik Migrant Centre in Moscow, Izzat Amon, had been accused of fraud of 630,000 rubles (approximately 7,250 EUR) and 1,000 USD. Twelve people had allegedly complained that they had not received legal services after paying Amon.Four months earlier, on 25th March 2021, Izzat Amon was abducted in Moscow and was forcibly transferred to Tajikistan. In the past, Izzat Amon had repeatedly criticised the Tajik government for failing to protect the rights of its citizens in Russia.

The authorities also continued with the persecution and silencing of the opposition. Former Democratic Party activist Rustam Mamajonov was sentenced to seven years' imprisonment for allegedly distributing video footage of opposition activist Sharofiddin Gadoev. And imprisoned lawyer Saidnuriddin Shamsiddinov faces new charges of having links with the banned political opposition group “Group 24“. Shamsiddinov’s lawyer denied that his client has been in contact with this group. If convicted, Shamsiddinov faces up to 10 years in prison.

These developments are covered in more detail below.

In May 2021, the Committee on Television and Radio Broadcasting introduced new measures establishing full control over the country's independent foreign language (including Russian) television and radio stations. According to human rights activists, more than 15 private TV and radio companies in Tajikistan received new licence agreements which set out - inter alia - that editorial offices are now obliged to obtain agreement on their reports and materials in foreign languages with the management of the State TV and Radio Committee before broadcasting. Without the Television and Radio Committee’s approval private television and radio companies will not be able to sign any contract with foreign media outlets, broadcast foreign media outlets’ programmes or broadcast programmes in languages other than Tajik.

Furthermore, they are required to “abide by the state policy regarding information”. In addition, independent broadcasters must broadcast state materials on their airwaves when requested by the authorities. If they refuse to sign the new licensing agreements, the TV and radio channels will lose their permission to operate.

Independent media outlets will also be required to pay 13,000 somoni (964 EUR) to obtain their five-year licences and will have to pay one percent of their annual income to the Committee on Television and Radio Broadcasting. According to Tajikistani media lawyers, these provisions were adopted without a legal basis and are in contradiction with national laws.

On 6th June 2021, the renowned Tajikistani journalist and human rights defender Khumairo Bakhtyor was put on the list of the “10 most urgent cases” of the “One Free Press” media coalition group. Although Bakhtyor has lived in exile since 2016, she continues to receive online threats and her family members are harassed by the Tajikistani authorities. In her journalistic work, Bakhtyor mainly covered political issues, exposing problems of corruption, until she was forced to flee the country.

On 20th May 2021, deputies of the lower chamber of parliament supported the draft law "On Access to Information on the Activities of Courts" proposed by the government of the Republic. According to the Chairman of the Supreme Court of Tajikistan, Shermukhammad Shohiyon, the law is aimed at ensuring the transparency and fairness of court proceedings, strengthening the relationship between courts andthe media and increasing public confidence in the judiciary. While the law provides for open access for journalists to public hearings, judicial information containing state secrets, commercial, family and personal secrets, and information about human honour and dignity will remain closed to the media. Civil society activists and human rights defenders are concerned that the draft law does not meet international standards and will further restrict journalistic coverage of court processes.

The stifling of free speech by the authorities continued to be alarmingly apparent during the COVID-19 pandemic. As the authorities played down the effects of the pandemic in Tajikistan, they warned journalists who reported on COVID-19 cases and deaths that they would be “held to account”.

Access to information about the evolution of the pandemic continued to be severely restricted and public authorities failed to provide information of public interest in a timely manner. In April 2021, the National Association of Independent Media (NANSMIT) published statistical data which shows that in 2020 Tajikistani authorities only responded to 65 inquiries (out of 84). In many cases the answers were stock, empty phrases or did not contain relevant information. 19 requests for information were left unanswered. Government websites were often inaccessible, and the authorities did not provide citizens with digital alternatives for receiving information when offline channels were restricted in order to limit the spread of the virus. One website (kvtj.info, Corona Virus Tajikistan) that provided civil society estimates of the number of people infected and succumbing to COVID-19 was blocked for internet users inside Tajikistan on 11th May 2020.

Until May 2021, the authorities claimed that no further COVID-19 cases had occurred since the president had declared Tajikistan’s victory over the infection on 26th January 2021. However, independent media reported that hospitals across the country are treating COVID-19 patients, however doctors are being forced not to identify them as such. Laboratories in the country would therefore only issue negative tests.

The State News Agency announced official data from the Ministry of Health only on 20th June 2021 that in total 13,308 infections had been registered in Tajikistan, with 90 deaths.

Three weeks later, on 12th July 2021 the government’s Corona virus taskforce, the “Republican Headquarter for the fight against COVID-19”admitted to a second wave of coronavirus in Tajikistan and confirmed a total of 13,834 infections and 103 deaths.

Many observers mistrust the official figures as statistics of the overall mortality rate paint a very different picture of the situation. According to the state statistics agency, 41,743 people died in 2020. That is 8,649 people more than in 2019.

Persecution and silencing of opposition

On 6th July 2021, the District Court of Sino in Dushanbe sentenced former Democratic Party activist Rustam Mamajonov to seven years' imprisonment for distributing video footage of opposition activist Sharofiddin Gadoev. According to media reports, 59-year-old Mamajonov was detained by state security officers in March 2021. Mamajonov pleaded not guilty and stated that the video was on his page by accident because he did not know how to use Facebook correctly.

According to the Khatlon Regional Prosecutor's Office, new investigations were launched against imprisoned lawyer Saidnuriddin Shamsiddinov in mid-April 2021. Saidnuriddin Shamsiddinov was sentenced to eight and a half years in prison in December 2020 for alleged fraud, illegal land sales and spreading false information. He now faces new charges of having links with the banned political opposition group “Group 24“. In 2014 Tajikistan’s Supreme Court ruled that Group 24 was an “extremist group“. Shamsiddinov’s lawyer denied that his client had ever been in contact with this group. If convicted, Shamsiddinov faces up to 10 years in prison.

In April 2021, a water dispute led to some of the worst clashes in years on the disputed Kyrgyzstan-Tajikistan border in the Batken region. The clashes started on 28th April 2021 and lasted for several days as people from both sides hurled stones at each other after surveillance cameras were installed at a water facility. According to official information, at least 55 people in Kyrgyzstan and Tajikistan were killed and over 270 injured. About 58,000 people had to flee their homes or were evacuated, and dozens of houses and several schools were destroyed.

On 1st May 2021 both countries called a ceasefire and committed to border demarcation as a priority project. Despite these promises and a bilateral meeting between President Rahmon and President Japarov, no concrete agreements on a further demarcation roadmap were reached during the reporting period.During this dispute, there was criticism of the Tajikistani authorities for failing to ensure access to information regarding the border clashes. Indeed, it was not until nine days after the clashes began that the authorities published information about the events and the number of injuries and casualties, and this silence contributed to rumours and false information being circulated on social media which further exacerbated tensions.