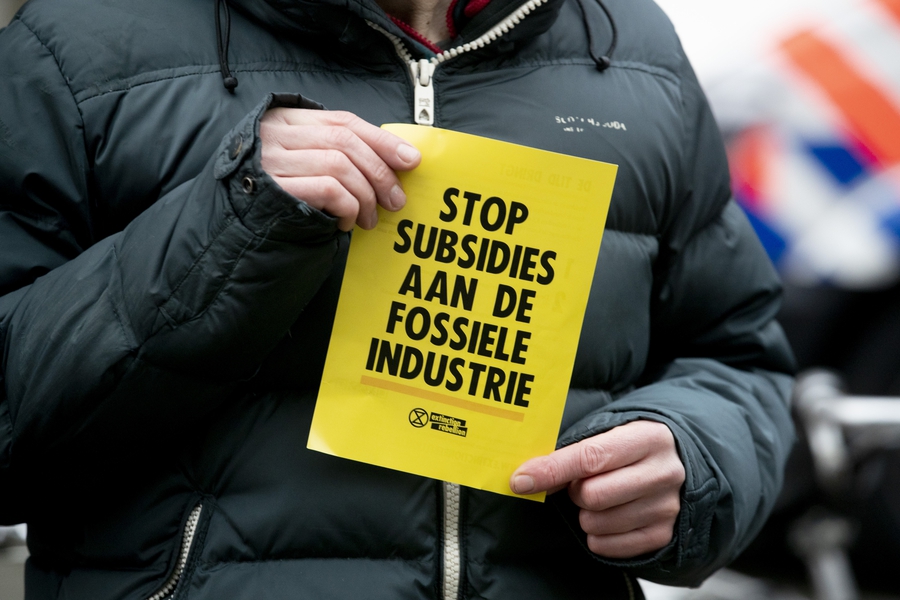 On 15th May 2021, almost 100 protesters were arrested for not respecting COVID-19 measures and ignoring the orders of police who wanted to disperse the crowd. The demonstrators - around 500 overall - gathered in Jaarbeursplein in Utrecht to protest Israeli violence against Palestine. During the event the municipality issued an emergency order against public demonstrations as adherence to COVID-19 measures for public events were deemed not to be respected. As a result, police intervened on the site.

All people arrested have now been released, except for one who is accused of throwing stones at the police. All of them were fined by the Public Prosecution Service.

On 18th May 2021, protesters staged a demonstration organised by Extinction Rebellion and the Dutch climate activist group Code Rood at the Shell headquarters in The Hague, following a positive court ruling.

The court held Royal Dutch Shell, a large oil company, accountable for greenhouse gas emissions and ordered it to change its course. This is the first time that an international tribunal has held a multinational company accountable, however it is uncertain as to how the court will enforce its ruling. The case was brought by the local Dutch chapter of Friends of the Earth, Greenpeace Netherlands, ActionAid, Both ENDS, Fossielvrij NL, Jongeren Milieu Actief, the Waddenvereniging and 17,379 individual co-plaintiffs. On the victory, Greenpeace said:

“This verdict is a historic victory for the climate and everyone facing the consequences of the climate crisis...Shell cannot continue to violate human rights and put profit over people and the planet. This verdict is a clear signal to the fossil fuel industry. Coal, oil and gas need to stay in the ground. People around the world are demanding climate justice. Today the court confirmed that the fossil fuel industry cannot continue their climate pollution. We can hold multinational corporations worldwide accountable for the climate crisis.”

A Dutch court ruled that Shell is liable for damaging the climate and has to radically cut its CO2 emissions.

An investigation was opened against far-right group “Vizier op Links” by the Public Prosecution Service in May 2021, after the group threatened left-wing prominent figures, such as Assistant Professor Nadia Bouras, as reported previously by the Monitor. The group - that claims on its website that it wants to stop the “left hegemony” in the Netherlands - was included in the most recent threat assessment of the National Coordinator for Counterterrorism and Security (NCTV) and had already been banned from Twitter due to the violation of the company's rules.

The head office of the Flemish media company DPG - located in Antwerp - was evacuated on 24th May 2021 after receiving a threat from the Dutch far-right group Dutch Anonymous Freedom Fighters. The group - which has around one thousand supporters - was reportedly searching for Belgian virologist Marc Van Ranst and was planning to send a bomb via mail or a gang to the building. In fact, they were convinced that DPG's staff were aware of Van Ranst's location. The virologist is currently hiding from an armed soldier who is haunting him.

The group's plan was revealed by one of its supporters, who considered it too extreme and reported the plan to the police. After searching the building with dogs, the police did not find anything. News was broadcast from an emergency studio on that evening due to the threat.

A harassment campaign targeting personnel of municipal health services (GDD) and COVID-19 experts was launched by The Digital Army, a COVID-19-sceptic group. The campaign included the dissemination of fake news and misleading information regarding the vaccine through fake social media accounts. These were coordinated through a Telegram channel managed by The Digital Army. Fake interviews and surveys were also distributed among municipal health services personnel with the objective to distract employees from their work and slow down the vaccination campaign. The address of Diederik Gommers, chair of the Dutch Intensive Care Association and Outbreak Management Team (OMT) member, was shared in the Telegram group by the members of the COVID-19-sceptic group, who were allegedly encouraging its supporters to attack him. The police are now investigating the case and considering what charges could be filed against The Digital Army, if any.

Two cases of threat and defamation against the Dutch public health service's (RIVM) member Jaap van Dissel came to an end in May 2021 following the imprisonment of two women. One has been jailed for eight weeks (four weeks suspended) for making online threats to van Diessel. The second woman was jailed for six weeks (four weeks suspended) for releasing a video where she accused the RIVM member of being a paedophile.

Series of attacks against reporters

“This is a new low point in the conditions in which journalists have to do their job. It illustrates the constant threat under which journalists in the Netherlands have to operate. This is a direct and life-threatening attack on two people, but it is also a new attack on journalism and freedom of the press."