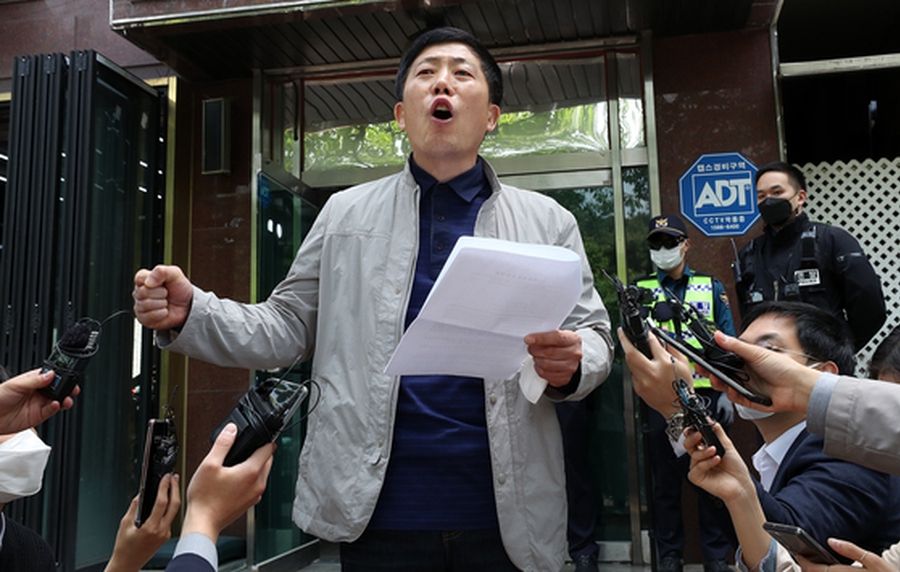 Over the last few months, the authorities arrested and charged an activist under the amended Development of Inter-Korean Relations Act for the launching of propaganda leaflets into North Korea. It was reported that the authorities are planning to further amend the law so that it bans people from sending digital information to North Korea.

In December 2020, as previously documented, South Korea’s parliament passed revisions to a law to ban the launching of propaganda leaflets into North Korea. The amendments to the Development of Inter-Korean Relations Act bar any scattering of printed materials, goods, money and other items of value across the heavily fortified frontier. It also restricts loudspeaker propaganda broadcasts.

Groups run by North Korean defectors and other campaigners have for decades sent anti-Pyongyang leaflets - alongside food, medicine, money, mini radios and USB sticks containing South Korean news and dramas - into the North, usually by balloon or in bottles on border rivers.

The South Korean government claims the ban is for the safety of people living in border regions and to help government efforts to achieve peace and unification in the Korean peninsula.

Activists and human rights groups condemned the amendments saying it has too broad a scope, would violate South Koreans’ rights to freedom of expression and would make engaging in human rights activism a criminal offence.

In May 2021, the law, which took effect in March 2021, was used against a well-known North Korean defector, Park Sang-hak, the first known violation of the law. His group had announced they had sent 10 balloons loaded with 500,000 leaflets and 5,000 one-dollar bills to North Korea at the end of April 2021.

Park said he wanted North Koreans to know the truth about the Kim Jong Un dictatorship and for North Koreans to rise up against his regime. The leaflets criticise the Kims’ dynastic rule. The dollar bills encourage people to pick up the leaflets.

The President of South Korea publicly spoke out against such actions and within hours, on 16th May 2021, Park’s office was raided and he was arrested and questioned. Park could be fined up to 30 million won (about USD 27,000) or sentenced to three years in prison.

Park, 53, is a North Korean defector who heads Fighters for Free North Korea (FFNK). He escaped the communist country in 1999 and has been sending propaganda leaflets across the border into North Korea since 2005. The Ministry of Unification revoked the licence permit of FFNK in July 2020, declaring that its operations "raise tensions and harm public interest."

In 2020, as previously documented, the South Korean government sent notice of an administrative review to 289 NGOs registered with the Unification Ministry that are working on North Korean human rights or supporting efforts to assist North Koreans. It said the inspections were necessary because the groups had failed to fully “report the operational performance they are required to submit every year” or “require additional fact-checking”.

Human rights groups have also condemned the targeted campaign of regulatory intimidation against civil society groups, calling it “discriminatory, lacking in transparency and intended to provoke fear and intimidation, creating a chilling effect”.

On 22nd July 2020, a coalition of 25 organisations working on North Korean human rights and supporting North Koreans living in South Korea issued a joint statement rejecting office inspections. The coalition called the government’s actions discriminatory, lacking in transparency, and intended to provoke fear and intimidation, creating a chilling effect on the affected groups.

In a further worrying move, it was reported in April 2021 that the authorities are planning to amend the law so that it bans people from sending digital information to North Korea. The pending amendment is raising concerns that radio broadcasts into North Korea could become illegal — a claim that South Korea’s Ministry of Unification flatly denied.

South Korean defector-lawmaker Ji Seong-ho criticised the law and its potential amendment, saying that “radio broadcasting transmitted into North Korea could easily become subject to punishment". Ethan Hee-seok Shin, a legal analyst at the Transitional Justice Working Group (TJWG), agreed that the amendment’s specific language leaves a lot of room for interpretation. He added: “Even if the unification ministry did not intend that, prosecution is something done by the police or the prosecutor’s office.”