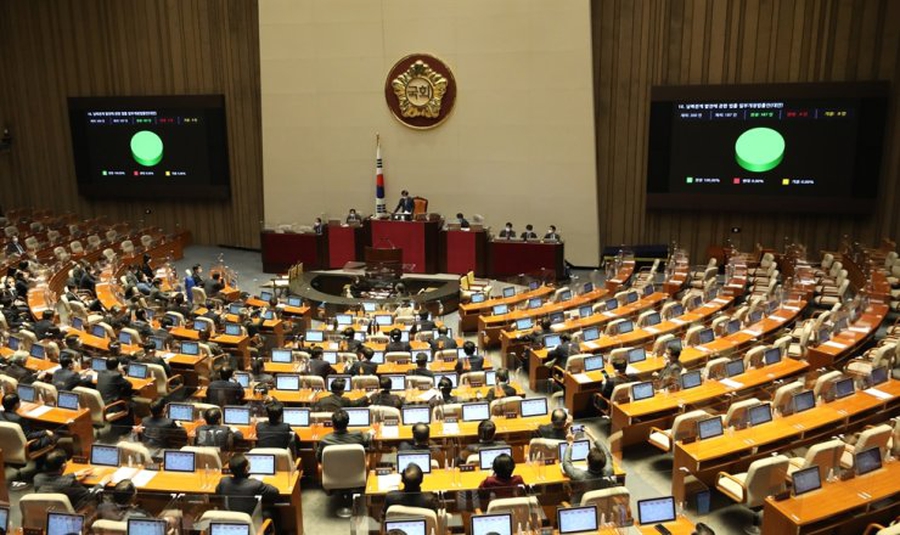 South Korea’s civic space continues to be rated as “narrowed” in new ratings issued by the CIVICUS Monitor in December 2020.

According to a report by Human Rights Watch, President Moon Jae-in’s administration has weakened the South Korean government’s criticism of North Korea’s human rights record. South Korea had co-sponsored annual resolutions at the UN condemning North Korea’s human rights abuses since 2008, but in 2019 and 2020 declined to do so at the UN Human Rights Council. Further, discrimination against women is pervasive, as is discrimination against lesbian, gay, bisexual and transgender (LGBT) people, and racial and ethnic minorities.

On 14th December 2020, South Korea’s parliament passed a bill to ban the launching of propaganda leaflets into North Korea.

Groups run by North Korean defectors and other campaigners have for decades sent anti-Pyongyang leaflets - alongside food, medicine, money, mini radios and USB sticks containing South Korean news and dramas - into the North, usually by balloon or in bottles on border rivers.

Isolated North Korea has long denounced the practice and recently stepped up its condemnation of it, to the alarm of a South Korean government intent on improving ties on the divided peninsula.

The amendments to the Development of Inter-Korean Relations Act bar any scattering of printed materials, goods, money and other items of value across the heavily fortified frontier. It also restricts loudspeaker propaganda broadcasts.

Any violation of the law, which will take effect in three months, is punishable by up to three years in prison or 30 million won (USD 27,500) in fines.

On 5th December, Human Rights Watch condemned the amendments saying it would violate South Koreans’ rights to freedom of expression and would make engaging in humanitarianism and human rights activism a criminal offence.

Lee Min-bok, an escapee from North Korea who leads one of the balloon-launching civic groups, told Radio Free Asia that getting outside information into North Korea was of the utmost importance. “I decided to escape North Korea after seeing the leaflets,” he said.

On 29th December 2020, more than two dozen civil society groups in South Korea filed a constitutional challenge against the new law. The groups said they had also filed for an injunction with the court to suspend the law while their suit was under review.

In recent months, the Moon administration has directly targeted groups that are working on North Korean human rights or supporting efforts to assist North Koreans, as documented by the CIVICUS Monitor.

The Ministry of Unification is currently investigating at least 289 NGOs, representing an unprecedented attack on the NGOs’ freedom to operate in South Korea. The Moon administration has even raided offices, filed criminal complaints and restricted leaflet drops prior to the passage of the amendment.

In November 2020, it was reported that the cases of nine individuals from three human rights groups working on North Korea have been sent to the prosecutor’s office, the Seoul Metropolitan Police Agency confirmed to NK News. Sources say that they have been accused of sending balloons filled with bibles or anti-DPRK leaflets across the border.

Eric Foley, the CEO of Voice of the Martyrs Korea (VOMK), Park Sang-hak, the head of Fighters for a Free North Korea (FFNK) and Park Jung-oh, the head of Kuensaem, told NK News that their three groups were included in that list.

Henry Song, a Washington D.C.-based North Korea human rights activist, said: “This is really outrageous and disappointing that at a time when these brave activists and defectors should be protected and supported, they are being hounded by the South Korean government.”

On 14th November 2020, tens of thousands of workers demonstrated across South Korea calling on the government to withdraw a regressive labour law revision and enact the “CHUN, Tae-il Act”.

Union members were protesting over revisions of the Trade Union and Labour Relations Adjustment Act which would ban labourers from occupying certain facilities at workplaces during strikes. According to IndustriALL, a global union, in addition to violations of the principles of freedom of association, the revisions fail to address existing recommendations by the tripartite ILO Committee on Freedom of Association.

IndustriALL affiliate Korean Metal Workers’ Union (KMWU) joined sister unions in the Korean Confederation of Trade Unions (KCTU) in holding demonstrations and marches across the nation, including 26 rallies in the capital Seoul and 13 in the regions.

Valter Sanches, IndustriALL general secretary, said: “IndustriALL stands in solidarity with its Korean affiliates in their struggle against the regressive draft law. We urge the South Korean National Assembly to immediately drop the proposed revisions. Instead, Korea must ratify the ILO’s Fundamental Conventions as per its earlier commitment”.

Trade unions have also proposed the “Three CHUN, Tae-il Laws” and gathered over 100,000 signatures in September 2020 to put the bill before parliament by petition. Among other things, it proposes to broaden the definitions of "worker” to give precarious workers access to trade union rights, close loophole “exceptions” and enable the application of minimum standards and protection at small companies with four employees or less.

In December 2020, a parliamentary committee passed the revisions. It was then moved on to the National Assembly's plenary session for a final vote.