Independence of Czech TV and radio under threat 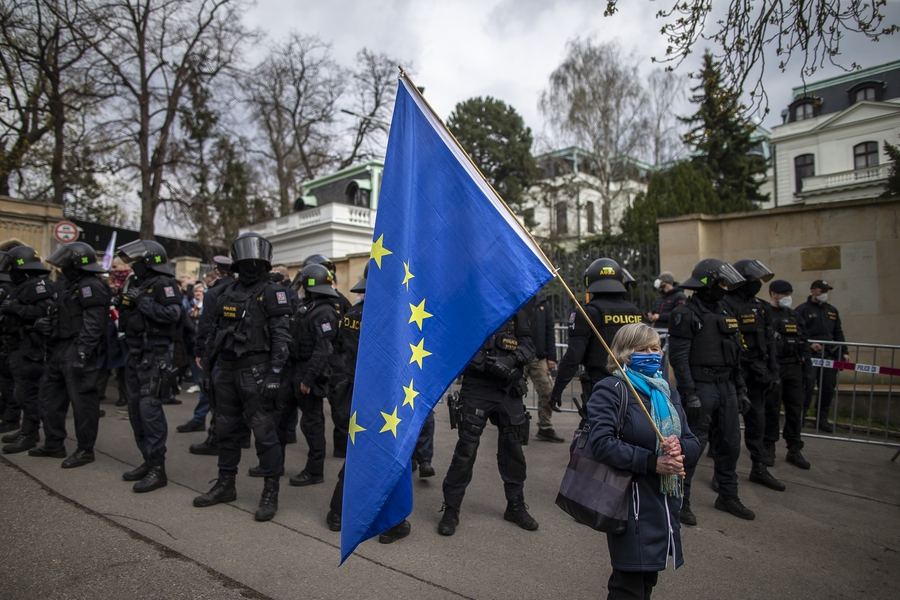 On 12th April 2021, Czech Republic lifted the state of emergency imposed in October 2020 to combat the COVID-19 epidemic. Nevertheless, most of the coronavirus provisions remained in force, among them a limit on public gatherings.

On 29th April 2021, 10,000 Czechs assembled in Prague to call for the removal of President Milos Zeman for his pro-Russia views. The protest came after a recent comment from Zeman casting doubt on Russia’s responsibility in a 2014 explosion in Czech Republic that killed two. Most protesters adhered to social distancing rules as organisers Million Moments for Democracy urged participants to adhere to COVID-19 guidelines. Protesters were also required to have a negative COVID-19 test. The protest was calm throughout without any altercations with the police. After the protest, the police announced in a tweet that people peacefully dispersed and that they did not have to deal with any major problems. At the time of the protest, the rules on public gatherings allowed for a maximum of 100 people.

As previously reported on the Monitor, in November 2020, the unexpected dismissal of the five members of the Advisory Board of the public broadcaster Česká (Czech Television) raised concerns over media independence. On 1st April 2021, the International Press Institute (IPI) again raised concerns over the increased interference in the independence of Czech television. During March 2021, there was an attempt made by the council to remove Czech TV CEO Petr Dvořák, who guarantees the broadcasting of critical news, alleging he had conflicts of interest. The attempt this time, however, was rejected by a majority of the council. The alleged conflict of interest was related to the fact that Dvořák is on the board of directors of a non-profit organisation operating the Leica Gallery in Prague. Deputy Chairman of the Board, Daniel Váňa expressed concern that Czech Television has reported on the Leica gallery significantly more in the last ten years compared to other galleries. However, the Supervisory Board of the Czech Television Council concluded that such a conflict did not exist.

On 9th April 2021, the European Broadcasting Union (EBU) reported that the national broadcaster Česká Televize (CT) has increasingly been exposed to political pressure. It states that the government is trying to influence CT by shortlisting candidates for the broadcaster’s governing council who are supporters of the government. It appears that the government is trying to oust Dvořák by stacking the council with favourable candidates. The EBU report argues that the push for the removal of Dvořák can be explained by the upcoming general election in October 2021. A removal of Dvořák would guarantee a more pliant CT that reports more favourably on the government’s campaigns.

This is not the first time the government has tried to undermine the independence of national television. In June 2020, the European Centre for Press and Media Freedom expressed concern about the makeup of the council and said it could no longer be seen as politically impartial.

The impartiality of the Czech national radio seems to also be under threat, with council members of Czech Radio trying to influence what is being broadcast. As Million Moments for Democracy reports, the pressure on CEO René Zavoral from the Czech Radio Council is increasing. Million Moments for Democracy wrote in May 2021 that council member Tomáš Kňourek approached Zavoral in mid-March and complained that the radio broadcast too few ‘main currents of opinion’ and that he would prefer more coverage of Euroscepticism and resistance to migration. Kňourek is a long-time contributor to the misinformation site Parlamentní listy where he previously described liberal democracy as brainwashing. Another council member, Josef Nerušil, complained on his social media that the far-right populist party SPD is underrepresented within Czech Radio.

According to Million Moments, the Czech Radio Council subsequently adopted a resolution expressing “dissatisfaction with the observance of the principles of objectivity, impartiality and balance in the broadcasting of the Czech Radio Plus station”. In addition, SPD’s allegedly insufficient representation was put into the ČT councillors’ annual report.