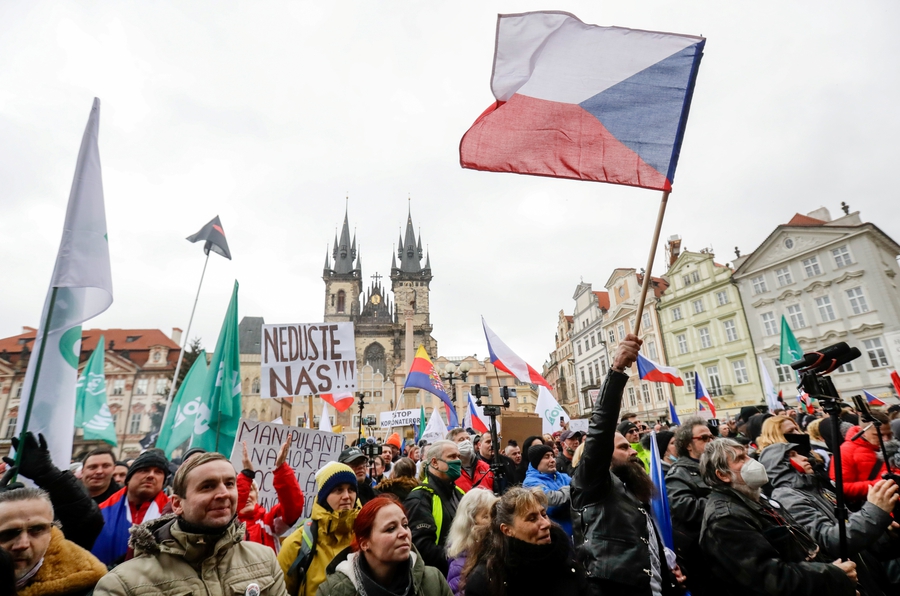 On 23rd December 2020, the Czech Republic extended its state of emergency until 22nd January 2021. The number of daily confirmed cases of COVID-19 reached record numbers in early January 2021, with a total of 17,752 cases -- the highest number to date in the country -- being reported on 6th January. Even though there has been a significant decrease in the number of daily cases since then, hospitals in the country are overwhelmed due to a rise in the hospitalisation of patients, and staff shortages on account of COVID-19 infections. On 14th February 2021, the government extended the state of emergency in the Czech Republic until 28th February 2021. However, it should be noted that, on 11th February 2021, the lower chamber of the Czech Parliament voted against the extension, which raises concerns over the constitutionality of such a measure.

As previously reported on the CIVICUS Monitor, in March 2020, the Communist Party (KSČM) put forward a proposed amendment to a law that intended to reduce the state budget available to finance associations and civic initiatives. Whilst Robert Basch and Barbora Hořavová from the Open Society Fund Prague reported to the CIVICUS Monitor that no legislative changes had occurred in the last two months, both highlighted concerns over the ongoing smear campaign against civil society organisations (CSOs that not only undermines public trust in CSOs but also compromises CSOs’ access to funding, and thereby their opportunity to fulfil their role and purpose.

By the end of December 2020, the government had imposed stricter measures to curb the spread of the virus, which has caused public discontent. In this context, several demonstrations against the COVID-19 restrictions took place in the Czech Republic, mostly throughout the first half of January 2021.

In the Czech Republic, participation in assemblies is restricted to a maximum of one hundred people in groups of twenty, and participants must wear masks and comply with social distancing rules.

The International Press Institute (IPI), Reporters Without Borders (RSF), the European Centre for Press and Media Freedom (ECPMF) and other press freedom groups have jointly expressed concern over the acquisition of Central European Media Enterprises (CME) by Czech billionaire Petr Kellner in October 2020. CME is a company that develops and produces content for thirty television channels in five Central and Eastern European countries. TV NOVA -- Czech Republic’s largest private TV channel -- is among the channels owned by the CME. Despite CME’s statement in which the company reaffirmed its commitment to independence, pluralism and media freedom, Kellner’s ties with China have caused apprehension. The billionaire's investment group PPF has large financial investments in the Asian country, and Kellner has already been accused of “running surreptitious schemes to buy favourable coverage of Beijing in the Czech press, monitoring Czech political figures opposed to the Chinese Communist Party, and encouraging high-level links between the two countries”. Thereby, this acquisition can represent a threat to media freedom in the country and, as a consequence, to democracy itself. The groups said:

“We note PPF’s extensive commercial dealings with China, whose leadership is particularly averse to criticism, especially on issues such as the treatment of Uighur Muslims in Xinjiang, Taiwan or Hong Kong, where a mass crackdown on fundamental rights is underway. The growing role of China in Central Europe is an issue of undisputed public interest in the region. Therefore, we ask you to ensure that the outlets you own are editorially free to publish critically about Chinese policy or investment in their countries without pressure to soften stances or avoid certain issues, no matter the repercussions for other investments or relations”.

Robert Basch, Executive-Director at the Open Society Fund Prague, told the CIVICUS Monitor that even though Kellner’s case is concerning in terms of media independence, this is not a unique development as a significant portion of the Czech media is already owned by politicians or influential business people. According to Basch this seriously compromises the media landscape in the Czech Republic. Criticism and news of public interest that may shed a negative light on certain media outlet owners or the politicians they support are wittingly disregarded.

Petr Kellner, the richest person in #CzechRepublic, has acquired the influential @TelevizeNova, further expanding the list of the country's billionaire media owners.

While commitments to #pressfreedom have been made, concerns linger, writes @Michal_Klimahttps://t.co/zzliSvW7Y5

In November 2020, the unexpected dismissal of the five members of the Advisory Board of the public broadcaster Czech Television raised concerns over media independence. The Advisory Board was dismissed by the Czech Television Council without any justification being given and there have been accusations that such a dismissal may have breached the law. Several civil society organisations have criticised the lack of transparency of the process. Vaclav Nemec, from Return the State to Us, affirmed:

“In the spring the Chamber of Deputies elected to the Czech Television Council candidates whose main qualification is loyalty to politicians and political parties which are openly hostile to the public media. It was only a matter of time for these councillors to begin to fulfil their political orders. Their current steps obviously do not aim to better the functioning of the Czech Television or increase the transparency of its management. Moreover, they limit its independence and subordinate the Czech Television to those political forces to which the independent public media are being a thorn in the side”.

Robert Basch and Barbora Hořavová, Executive-Director and Programme Director respectively at the Open Society Fund Prague, said that there is increasing pressure towards Czech Television and Radio, as both outlets fulfil their responsibility as public media broadcasters and criticise the government when they see fit. Basch added that due to this, certain political powers currently aim to “stop the independence and criticism against the government and the President that comes from the Czech TV”.

The CIVICUS Monitor has also previously reported on existing concerns over the lack of impartiality of the members elected in May 2020 to the Czech Television Council. It is worth noting that the Chamber of Deputies has been solely responsible for electing the members of the Council since the establishment of the Czech Television in 1992. However, apprehension over the politicisation of the election process led to the implementation of several reforms in 2001, e.g. the Council was enlarged from nine to fifteen members, and civil society organisations were allowed to submit nominations of candidates for the Council. Although the Chamber of Deputies no longer has the exclusive power to directly nominate and elect the members of the Council, the aforementioned developments indicate that the safeguards put in place in 2001 may not be enough to guarantee the independence of this election.