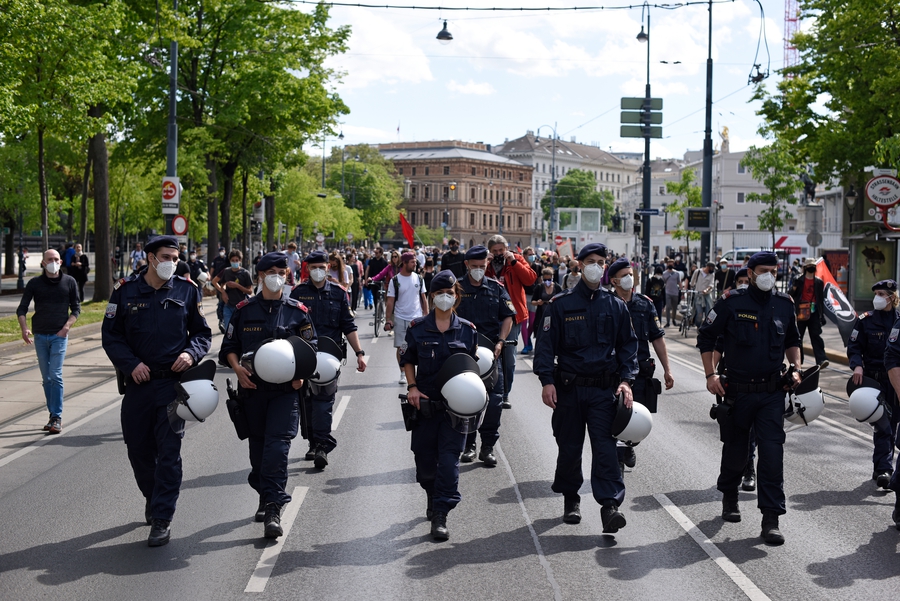 Police have come under fire for the use of excessive force at May Day protest (Photo by Thomas Kronsteiner / Getty Images).

As Austria looks forward to receiving 3,5 billion Euros from the ‘EU Recovery and Resilience facility’, organised civil society have raised concerns about the lack of willingness by the government to make transparent decisions and involve civil society in drawing up the plans. One recent example concerned an invitation for local and regional authorities, social partners, CSOs and youth organisations to send suggestions to a specific email address by 26th February 2021, but there has been no feedback since on how the suggestions have been taken into account. Around a dozen CSOs were also invited to a 40-minute video conference in which Federal Minister Karoline Edstadler rejected civil society calls for a structured and transparent participation process on the grounds that there were no resources for it.

The Federal Chancellery and Foreign Ministry have proven that there are alternatives: in a press release, the civil society platform SDG Watch Austria explained the process for drawing up Austria’s Voluntary National Implementation Report as a “successful participatory process in which all stakeholders, especially civil society and academia, were able to contribute success stories and provide feedback”. Unfortunately, this has not been the case for the national recovery planning. As IGO Managing Director, Frans Neunteufl, sums up:

“The Austrian government is very reluctant to use the modern options available for public participation and is thus forgoing the expertise and support of organised civil society”.

Given the vital and active role of civil society in Austria, which has filled the gaps in public policy during the pandemic, it is concerning that they do not have a meaningful role in planning recovery fund distribution.

The proposal for reconstruction has been criticised by CSOs, who highlight major shortcomings in the areas of global responsibility, social sustainability and climate justice. Stefan Grasgruber-Kerl, human rights expert at Südwind, commented that

Of the 17 recommendations proposed by Südwind, only one was included, five others were weakly represented, while 11 points were disregarded. Grasgruber-Kerl commented further, explaining that

“standards for public participation were clearly broken: there was no feedback, no statements, and no public debate...Simply giving an email address to which civil society can submit its proposals is a farce and has nothing to do with a structured consultation process”.

CSOs IGO and Decidim Austria are working to address the deficit in civil dialogue and transparent and accountable decision making. Thanks to digitalisation, politicians now have practical instruments to facilitate a dialogue with citizens, and the two CSOs are working to bring one of the most internationally established open-source online participation platforms to Austria. They are inviting government and the administration to make use of this. Project Manager at Decidim Austria, Romy Grasgruber-Kerl, commented:

“In times of loss of confidence in politics, it is important that decision-making processes are conducted transparently and openly”.

No more house searches of public officials: a cover up for corruption?

The ÖVP Ministry of Interior is proposing to revoke the possibility to conduct house searches of public officials in an amendment to the State Protection Act. Paragraph 112a in the Code of Criminal Procedure has been criticised by politicians and citizens who are calling for its removal from the new draft law. Critics argue that the paragraph in its current form “represents a step backwards in the fight against corruption” because it proposes that the confiscation of documents and media data from public officials should only be possible in exceptional cases. The paragraph has gained the nickname ‘cover-up paragraph’ as it is seen as an attempt by the ÖVP to circumvent investigations and cover up corruption.

The Association of Public Prosecutors has stated that the paragraph should be rejected in its present form because it places too many restrictions on the investigative powers of the public prosecutor’s office, and thus would make effective and successful investigation of criminal cases difficult or even impossible. There has also been political backlash, with Justice Minister Alma Zadić (Greens) calling for a revision of the new draft law. An online petition to ‘stop cover-up paragraphs’ by association Aufstehn has mobilised thousands of people across Austria, garnering support on social media. Through the petition, Aufstehn is promoting the use of civic technologies to break down barriers to participation and political processes by directing people to submit opinions on ministerial drafts on the parliament website, where theoretically every contribution must be taken into account during the course of the legislative process.

The storm over paragraph 112a also comes in the wake of recent debate on the abolition of the “obligation to be truthful”, as politicians clash in a discussion regarding new rules of procedure for investigative committees.

Around 20 demonstrations were registered on 1st May 2021 in Austria’s capital, but one at Vienna’s Votivpark saw excessive force by police, including the use of batons and pepper spray, and over 11 people were arrested. The police violence is said to have escalated after protesters tried to climb the scaffolding of a church to put up banners. Footage shows police spraying pepper spray at protesters and tackling protesters to the ground to carry out arrests. In some cases, uninvolved people in the park were injured through the use of pepper spray and run down by the police. Protesters reported that there were around 50 people in need of acute medical attention following the violence. Plainclothes police officers were also amongst the demonstrators, using pepper spray to curb the crowds. Interior Minister Karl Nehammer (ÖVP) expressed thanks to the police officials and spoke of an "abuse of the basic right to assemble", whilst organisers condemned the “police attacks” and called for police reform.

Violent clashes between the police and antifascists

On 8th May 2021, the day marking the end to National Socialism in Austria, neo-fascists demonstrated in Vienna. An anti-fascist counter demonstration was also organised on the same day. Violent clashes broke out between the police and the left-wing counter demonstrators after police moved to protect the neo-fascist demonstrators, using pepper spray, kettling and heavy-handed policing to curb them. The clashes were eventually quelled when police officers accompanied neo-fascist protesters to the subway. One arrest and several injuries were reported.

On 28th May 2021, about 500 people took part in a protest organised by Fridays for Future and other environmental CSOs against what is said to be the largest Viennese transport construction project in the coming years. The project involves the planned extension of the S1 northeast bypass including the Lobau tunnel.

“The Federation of Industrialists must recognise that the age of the internal combustion engine is over. Climate neutrality is only possible if there are binding exit targets for coal, oil and gas. This also includes the construction of new highways” - co-organiser Simon Pories, Fridays For Future.

Police reported that the protest was peaceful, however the majority of the participants had to be carried away. According to the Interior Minister Karl Nehammer (ÖVP), the “blockades of activists represent a completely unnecessary danger for all road users and emergency services”.

Amidst the neo-fascist and anti-fascist demonstrations in Austria on 8th May 2021 (see above), a journalist was attacked with pepper spray by the police, despite appearing to pose no danger and after the situation had largely calmed down.

Austria’s Wiener Zeitung may face possible closure of its print edition after the federal government announced plans to scrap mandatory public advertisements of companies in its official gazette. If the plan is successful it could lead to the newspaper losing three quarters of its funding. The plans were announced by the Austrian People's Party (ÖVP) and Greens coalition as part of the implementation of an EU directive on the "use of digital tools and procedures in company law". The Austrian Press Union and Press Club Concordia criticised the lack of detail in the plan to assist the newspaper’s survival.Eike-Clemens Kullmann, President of the Austrian Press Union (GPA), reacted:

“The Wiener Zeitung is one of the outstanding quality products on the domestic media market. Its closure would be an irretrievable loss for the democratic-political discourse in Austria.”