Five HRDs released in Venezuela, but cases of arbitrary detention and intimidation continue 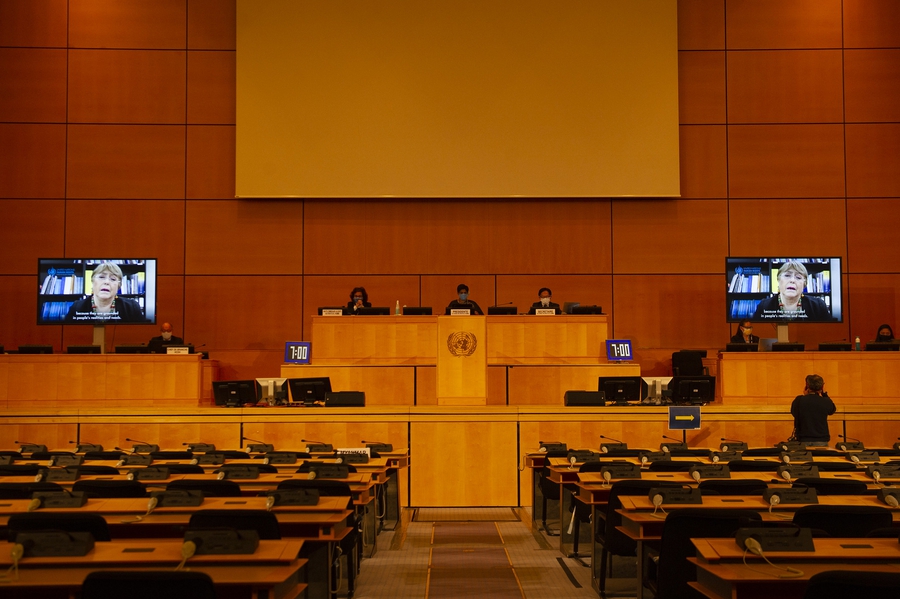 During the 46th session of the Human Rights Council in Geneva, United Nations High Commissioner for Human Rights Michelle Bachelet spoke about the situation in Venezuela. In a statement on 11th March 2021, the High Commissioner said that access to basic goods and services like medical assistance, water and petrol has been scarce, which contributed to sparking social protests and severely compounded the humanitarian situation. Bachelet also expressed concern about recent initiatives to impose undue restrictions on civil society’s ability to operate, including through freezing of assets, and about shrinking civic space. She said her office had documented at least 66 cases of intimidation, harassment, disqualification and criminalisation of journalists, media outlets, human rights defenders and political opposition since September 2020.

The High Commissioner alerted that in January 2021 alone, at least three search and seizure operations were conducted at media outlets’ offices. To varying degrees, equipment was seized, offices sealed, staff intimidated and broadcasts suspended. Looking to the upcoming elections, Bachelet reminded Venezuelan authorities of their obligation to protect fundamental freedoms and ensure conditions for meaningful participation in public life, including dissenting voices.

This report seemingly angered Venezuela’s government, who released an official statement saying they would review Venezuela’s relationship with the Office of the High Commissioner for Human Rights (OHCHR). In the communication, Nicolás Maduro’s government said it “regretted and rejected” Bachelet’s report, claiming it was unbalanced and politicised.

On 24th March 2021, police detained social leader Jairo Pérez during a protest for drinking water in La Vega, an area of the Libertador municipality where demonstrations had been taking place for three days. Civil society organisation Provea said that the Bolivarian National Police (PNB) arbitrarily detained the social leader when he was exercising his right to freedom of peaceful assembly. Provea reported that the police released Jairo Pérez after five hours of detention.

On 16th March 2021, the security chief of Servicio Nacional de Medicina y Ciencia Forense (National Medicine and Forensic Science Service - Senamecf), Richard La Rosa, threatened Unión Radio journalist Rosibel González. As reported by civil society organisation Espacio Público, the journalist was covering an incident at a morgue when La Rosa began yelling at her and threatening to beat her up. The security chief also made an implied death threat. According to the CSO, there have been similar incidents at this venue before, and Senamecf staff often obstruct journalists’ work.

In a separate incident on 16th March 2021, an officer of the Cuerpo de Investigaciones Científicas, Penales y Criminalísticas (Scientific, Penal and Criminal Investigative Body - CICPC) attempted to intimidate and take away the phone of journalist José Ricardo Hernández of La Calle newspaper. The reporter was covering a shooting in Valencia, Carabobo, when the officer arrived and tried to prevent his work. Video published by Espacio Público shows the officer approaching the journalist, covering the camera with his hand and asking what Hernández is doing while he tries to hold the phone.

On a related note, Espacio Público reported 38 violations of freedom of expression in Venezuela in February 2021. The most common cases involved censorship, intimidation and bureaucratic restrictions affecting public sector workers, journalists and media outlets. State institutions, police and government officials were the main perpetrators. For example, on 4th February 2021, the Public Ministry of the central state of Carabobo cited journalist Kevin Arteaga for his coverage of a protest demanding service delivery. Newspaper El Carabobeño, where Arteaga works, reportedly received a request for information on the journalist as part of an ongoing investigation.

On 10th February 2021, internet observatory VE Sin Filtro denounced that InSight Crime's website had been blocked in Venezuela by state-run internet service provider CANTV. InSight Crime, which produces research on organised crime in Latin America and the Caribbean, was reportedly censored after publishing a report on homicide rates in the region. According to their research, Venezuela had the second highest homicide rate in the region in 2020.

On 11th February 2021, five detained humanitarian workers with civil society organisation Azul Positivo were conditionally released after spending one month in prison. As previously reported on the Monitor, the staff members were detained on charges related to alleged money laundering, fraud and criminal association when the police raided the organisation’s offices in Maracaibo on 12th January 2021. While the five were released, the charges against them have not been dropped and they will have to present themselves to the police every 30 days. Human rights organisations have continued to call on authorities to drop the charges and refrain from criminalising human rights defenders.

In a separate development, Alfredo Romero, president of organisation Foro Penal, said on 2nd March 2021 that the vast majority of the political prisoners in Venezuela have not had access to a fair trial. Romero asserted:

“The fact is that more than 90% of the people detained for political motivations, 15,678 since 2014, have not had the right to a trial. Only 120 of them, 7%, have been convicted, and this because they were forced to admit to things... There is a clear violation of the right to defence in the cases of political prisoners.”

According to the human rights defender, Venezuelan authorities have used indefinite preventive detention as political punishment. Foro Penal reported that there are currently 323 political prisoners in Venezuela, 23 women and 300 men. 123 are members of the military and 200 are civilians. However, the organisation stated that 88% of these detainees have no convictions. Though they have not faced trial, many have been in jail for years.