Government continues its attack on CSOs 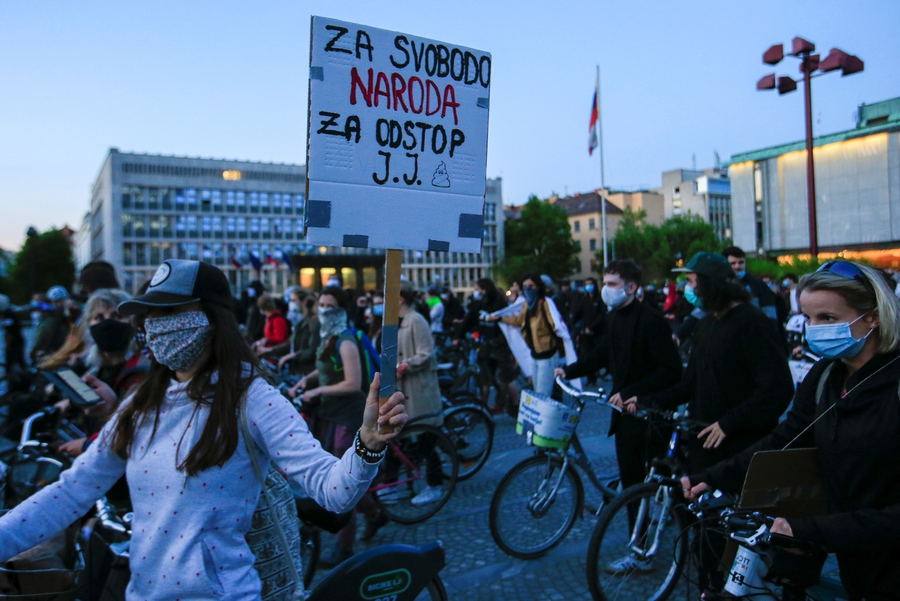 A protester holds a sign reading "For freedom of people for resignation of J.J" (REUTERS/Borut Zivulovic via Gallo Images).

Following the downgrade of Slovenia by the CIVICUS Monitor, attempts by public authorities to undermine civic space in the country continue.

But protests woke up the country by revitalising Slovenian civic mobilisations. Meet these stories of resistance at Activizenship5: https://t.co/fhvrAeeGqa pic.twitter.com/zmb5zpvCig

After various restrictive measures and hostile rhetoric targeting NGOs since the new government took power in Slovenia in March 2020, in December 2020 the Janez Janša government attempted to introduce an amendment abolishing the state’s fund for non-governmental organisations through its 7th anti-corona stimulus package.

The fund was introduced in 2018 to provide a systemic source of funding for the professionalisation and development of non-governmental organisations. This was a long-term demand by civil society and at the time it was considered as a “huge step forward” by NGOs, in government’s relations with the sector as it aimed to provide crucial support for development, including advocacy capacities and professionalisation.

In 2019, for the first time, grants from the NGO fund were allocated to the projects of dozens of NGOs from different fields, which were selected based on a public tender procedure administered by the Ministry of Administration. However, Prime Minister Janša had long pledged to cut public support for NGOs. Since he took office, his Jansa’s party has continuously targeted some of the organisations who were the first recipients of the grants from the NGO fund in 2019 with hostility and restrictive measures, including eviction from their offices.

In December 2020, the Slovenian government proposed abolishing the NGO fund as part of the new anti-corona stimulus package. In a press release, Centre for Information Service, Co-operation and Development of NGOs (CNVOS) said:

“The NGO fund is a thorn in the side of the biggest government party because it is the only systemic source of funding for non-governmental organisations, and the government cannot willfully strip it of the money because it is protected by the NGO act. Therefore, the SDS now wants to change the act.”

Following a great mobilisation of NGOs and citizens against this move, the amendment abolishing the NGO fund was removed from the 7th anti-corona stimulus package, approved in Parliament on 29th December as the coalition party SMC – that had proposed the NGO law in 2018 – joined opposition parties in voting against the proposed amendment.

In January 2021, the Ministry of Environment proposed new changes to the Environmental Protection and Spatial Planning Acts which would exclude environmental NGOs from key relevant procedures. The law is currently under consultation. The draft bill would allow only individual citizens demonstrating legal interest – and not environmental and nature conservation NGOs – to initiate an administrative dispute against Spatial Implementation Acts.

In Spring 2020, the government had proposed changes to the Construction legislation (in April, prolonged in June 2020 until the end of 2021) and the Nature Conservation Act (in May 2020) attempting to change this within the Coronavirus packages. The first law was challenged in the Constitutional Court which suspended its implementation until a decision would be reached.According to environmental NGOs, these new bills would restrict participation of NGOs in environmental impact assessments even further.

“In the new Environmental Protection Act proposal the government goes a step further. NGOs are simply excluded from key environmental procedures. They would not be able to take part in [environmental impact] assessments, the only thing they could do would be to appeal against the adopted decision,” said Umanotera’s press release.

Quality #environment, #nature and #health are our common good and not a playground for the private interests and exploitation! 🚜🛢🔥🪓
The new @vladaRS preposition is again lowering the environmental standards and silencing the #NGOs. 🤐👎 #civilhttps://t.co/tLr7FmnHdm

On 19th January 2021, members of an autonomous social and cultural community who have been occupying the defunct Ljubljana bicycle factory Rog for years were forcibly evicted from the premises by private security companies and the police. The community was formed by “hundreds of creative individuals, sportists, circus artists, skaters, rollerskaters, bmx-ers, dancers, tattoo artists, activists, migrants”, who will as a result of the eviction be homeless.

The removal was initiated by the local authorities. According to local news portals, the eviction happened after many years of court procedures and disagreements. People in the building were not allowed to take their belongings. The national press agency STA also reports that

“Representatives of one of the activist organisations squatting the compound told the STA that security guards dragged people out of the building with police standing watch, while the rtvslo news website reported police used tear gas against some individuals.”

A solidarity protest was expected to take place on Friday 22nd January 2020. The call for mobilisation also denounces violence by the police and private guards during the eviction:

“To achieve their goals they used intimidation, beatings, pepper-spray, they detained at least 13 people, 6 needed ER treatment. The police force was violent and absolutely went far beyond its legal powers, which is also what it does every day on the borders of Fortress Europe. Whose laws are these? In whose name?”

As previously reported, protests against the illiberal restrictions imposed by the government have taken place since April 2020. The protest wave continues despite being challenged by heavy fines by the police. According to local contacts, people have been organising in alternative ways to overcome the restrictions. For example, people organised car protests around the Parliament and individual walks through the city with protest signs on their umbrellas.

While the protesters continue to receive fines, regardless of the form of the demonstration, the mobilisation continues. The CIVICUS Monitor spoke to Tea Jarc, trade unionist and youth activist who has been involved in ongoing protests taking place in Slovenia:

“At the moment we are staging car protests, but are still being fined for this....It is clear that the government is doing this because they want to attack individuals and they think that they will stop us by bankrupting us.The government is doing whatever they can to punish everybody who is expressing an opinion against it. Throughout protests we have accumulated fines to the value of about 10 000 euros and we have been able to collect some money from donations. Nevertheless, we have been protesting for over six months and will continue to do so in creative ways.”

On 6th January 2021 Radio Študent (RŠ) in Slovenia learnt that the full funding from its founder, the Student Organisation of the University of Ljubljana (ŠOU) would be lost. There was no prior warning of the funding cut or consultation with the station. As a result, Europe’s largest and oldest independent student radio station is now under threat of shutting down. According to the station the funding cut comes as a result of its critical reporting on the ŠOU. Ana Kandare, Director of the Radio Študent Institute, said that the announcement came unexpectedly:

“No one from Radio Študent had been informed about the ŠOU plan. When the RŠ board finally had a meeting with their representatives, they understood the real reason for their decision: the ŠOU is not satisfied with our critical reporting on them. We are one of the few Slovenian media continuously critically reporting on their questionable organisation management and cash flow. Their managing director offered Radio Študent four days to decide between two options: ‘Either you leave on your own or we sell you’. They even offered some kind of compensation for reporting about them positively.”

In a statement the European Federation of Journalists said:

“In times of shrinking public space for independent journalism, a project like Radio Študent run by students, young journalists or content providers who report without being afraid, gives a great example about the beauty of independent community radio. We fully support their request for decent funding. Training future journalists to become critical reporters in such projects is indeed best practice,”- Renate Schroeder, EFJ Director.