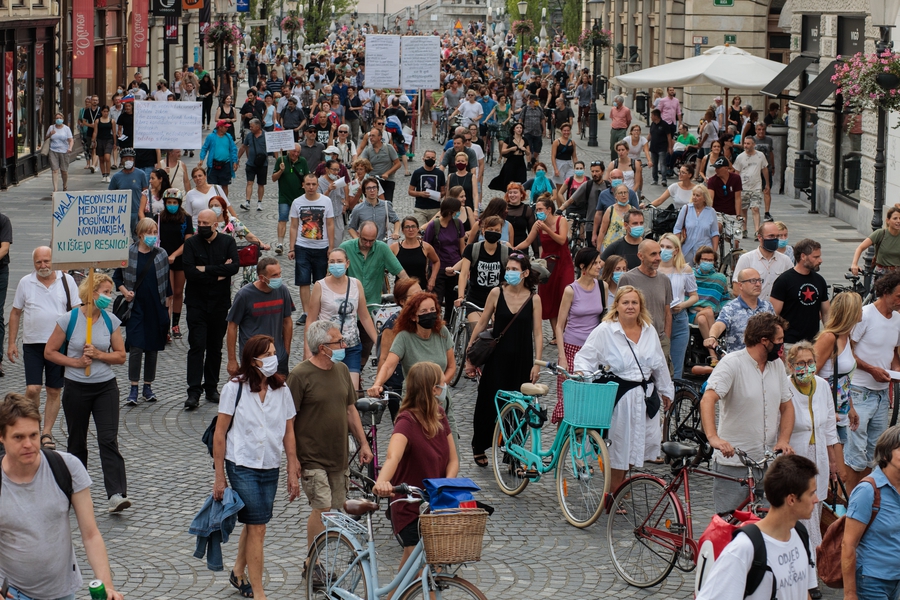 On 13th March 2020, only one day after the announcement of the COVID-19 pandemic in Slovenia, a new government was formed. Four political parties, led by the anti-migrant right-wing Slovenian Democratic Party (SDS), had already agreed to form a coalition government on 25th February 2020. The agreement followed the resignation of Prime Minister Marjan Šarec on 27th January 2020, after a law that would nationalise supplemental private health insurance split his minority-government coalition made up of five small parties. This coalition was formed after the 2018 elections: despite SDS being the largest parliamentary party, other parties refused to form a coalition with the party’s leader Janez Janša due to his right-wing policies. Šarec hoped his resignation would open the way for early elections but, instead, two parties from his coalition decided to enter into an alliance with SDS.

Protests, especially Friday anti-government protests (see more below), have been a regular feature of public life in Slovenia since Janša took office. Some citizens initiated cyclists’ protests to complain about the government’s handling of the coronavirus crisis. In an interview with the European Civic Forum (ECF), Nika Kovač from the Institute of the 8th March, explained that these protests “do not have organisers” and that every week a new group joined the demonstration against the government, each aimed at a different cause.

Protests have been staged every Friday thus far, with more than thirty held since March 2020, and have since spread across Slovenia. The main protest is held at 7 pm, but before this there is also a special action linked to the most recent developments in various fields (environmental affairs, gender equality, labour rights, culture).

“The main concerns are the actions of the government and growing social inequalities, but there are different formations and groups.... For example, the culture sector is hugely present because it has been harshly affected by the cuts of the government,”- Nika Kovač.

The rebalancing of the 2020 budget confirmed that, in order to deal with the COVID-19 pandemic, culture “will pay the price” for this crisis. Tadej Meserko from Asociacija, the Slovenian network in the field of independent (NGO) culture, told the CIVICUS Monitor that “while the budget in culture was cut, most of the other Ministry budgets were raised”.

“The rebalancing budget proposal of 2020 confirms that there clearly has not been any planned action on culture, although cultural experts have repeatedly warned that the pandemic has cut into culture and therefore needs additional incentives. The Ministry is ignoring us.”

Friday anti-government protests have been subject to intense police scrutiny. Concerns were raised over the police handling of these protests in Ljubljana. Following the 12th June 2020 protests, Amnesty International Slovenia (Amnesty International Slovenija) called on the head of the police to inspect the alleged excessive use of police powers. One case concerned two protesters who were allegedly beaten and faced verbal threats while already tied up and under the full control of the authorities.

The organisation also prompted the Ombudsman to look into the matter. The Ombudsman published a summary of its response sent to the organisation to inform participants in the protest about the complaint mechanisms available in such cases (lodging a complaint with the Ministry of the Interior; filing a criminal report with the Specialised State Prosecutor’s Office in case of suspicion of criminal offence). While the Ombudsman noted that the description of cases, as per Amnesty’s letter, could indicate unlawful conduct by police officers, they decided not to investigate the matter in more detail because of the generalised nature of allegations in the letter and the lack of consent by persons affected by the investigation of the application.

On 19th June 2020, the police randomly stopped people who allegedly went to protest and completely closed access to Republic Square (Trg republike). The latter is a site of high symbolic importance in Slovenia, located opposite the national parliament, and such police action was a historical precedent.

In another public statement, Amnesty International Slovenia stated that the right to peaceful assembly is under threat in Slovenia.

"Freedom of peaceful assembly for the purpose of protest and freedom of expression are becoming endangered in Slovenia. This has been witnessed by a number of moves by the authorities in recent weeks, including police censuses and proceedings against people for messages on their posters, police stopping random people allegedly protesting, and restricting access to the symbolically important Republic Square. We inform the authorities that participation in rallies and their organisation is a right, not a privilege. The exercise of this right does not require a state permit,”- Nataša Posel, Director of Amnesty International Slovenia (AIS).

Due to the difference in media reporting on the police’s handling of protests in the recent period, the police issued a statement. They noted that competent authorities were not notified about the protests and that the organisers were unknown. This meant that the duty of certain tasks fell on the police, they said (e.g. ensuring that participants do not bring dangerous items to the protests, ensuring order at the event, ensuring that the number of participants does not exceed the capacity of the assembly site).

The police further stated that security circumstances changed after each protest, and security plans were accordingly adjusted. As at previous protests, part of a small organised group jumped the fence and moved to a closed area, while another masked group of protesters tried to tear down the fence, which the police erected along the entire Republic Square. According to the police, the purpose of erecting fences was not to prevent the assembly of people and free expression of opinion but to ensure the safety of participants and objects.

On 12th July 2020 hundreds of journalists and media workers gathered in front of the National Assembly to protest against three media laws proposed by the government, which were being discussed by the parliamentary Culture Committee. The protest was attended by the Slovenian Journalist Association (DNS), journalists and media workers from the public broadcaster RTV Slovenija, the Slovenian Press Agency (STA), other media outlets and journalist trade unions (see more under expression).

"Responsible journalism must always advocate and defend the foundations of democracy in all fields of society ... we must never allow for media freedom to be undermined," - DNS head Petra Lesjak Tušek, a newspaper Večer journalist and editor.

On 13th July, the Slovenian Press Agency, STA (Slovenska tiskovna agencija), said in a statement addressing the public in Slovenia as well as abroad, that the changes planned to the three main media-related laws are an attempt to push political interests into a field where they have no place. The editorial board said with regard to the changes planned for the 2011 law on the STA:

"Handing appointments back into the hands of the government would be a massive setback for the autonomy and independence of the STA.”

Currently, the agency's supervisors are appointed by the National Assembly with an absolute majority, and they in turn appoint the general manager through an open call for applications.

"This guarantees that a plurality of interests is represented in the process. The proposed changes, however, open the doors to attempts at direct influence on editorial policy at each change of government, destabilising editorial policy.”

The editorial board also states that the legislative changes would constitute a significant interference in the STA public funding and in its governance.

"The STA would no longer be funded directly from the budget, a source that has come to represent a decreasing share of its total funding but would receive a part of the RTV Slovenija licence fee."

The Slovenian Journalists’ Association (DNS) called for the withdrawal of the media laws and requested the preparation of new solutions based on a broad public debate.

The International Press Institute (IPI) has analysed the state of mass media in Slovenia since the new Janez Janša government took over in mid-March 2020, stating that:

"Few countries in Europe have experienced such a swift downturn in press and media freedom after a new government came to power".

The IPI notes the government plans to introduce legislation to de-fund public broadcaster RTV Slovenija and Janša's attempts to expand his party's pro-government media system, chiefly NovaTV24.si, much of which is funded by Hungarian media linked to Prime Minister Viktor Orban.

In the last few years, companies from Orban’s sphere of influence have poured millions of euros into SDS’s media projects from its publishing house Nova Obzorja, and made a huge investment in SDS’s ‘fox news like’ television station Nova24 TV. It appears that cooperation between Orban and Janša also works in other more indirect ways: in the last year Hungarian OTP bank took over one of Slovenia’s medium sized banks, SKB, and is also rumoured to have plans to buy Slovenia's second largest bank, NKBM. And just last week Slovenia's third most viewed TV station, Planet TV, was bought by one of the two biggest Hungarian media companies, T2.

According to IPI, journalists are now working in a far more antagonistic climate, one in which staunch criticism of the prime minister risks resulting in an immediate rebuke, while Janša's attacks on journalists and media outlets are eroding public discourse and worsening polarisation.

IPI's In-depth report on the swiftly deteriorating situation for #pressfreedom in #Slovenia has been published today.

We look at how veteran PM Janša has immediately renewed long-standing grievances with the press and denigrated critical media outlets ⬇️https://t.co/eYcIJKCVwS

Other attacks on journalists

Journalist Eugenija Carl who works for public broadcaster RTV Slovenia received a threatening letter containing white powder in June 2020, as documented by the Committee to Protect Journalists (CPJ). The letter used insulting names and made death threats, and the powder gave her an allergic reaction. The letter also referenced a defamation case she had filed against PM Janša in relation to a 2016 tweet, where he referred to journalists as “retired prostitutes”.

“Slovenian authorities must spare no effort in investigating the threats made against journalist Eugenija Carl. Authorities must take this case and other instances of threats against the press seriously, to show that the Slovenian media will not be silenced,”- Gulnoza Said, CPJ Europe and Central Asia Program Coordinator in New York.

In a separate incident documented by CPJ, Mojca Šetinc Pašek, a reporter and editor at the public broadcaster RTV Slovenia, and Miša Molk, a host on the network, were informed that a criminal complaint had been filed against them. The complaint relates to their participation in a peaceful protest against three proposed media laws (see above). The complaint alleges that the two journalists were responsible for organising the protest which violated Slovenia’s COVID-19 restrictions. Pašek told CPJ that the complaint is an attempt to intimidate journalists.