Police brutality during protests and targeting of journalists a huge concern 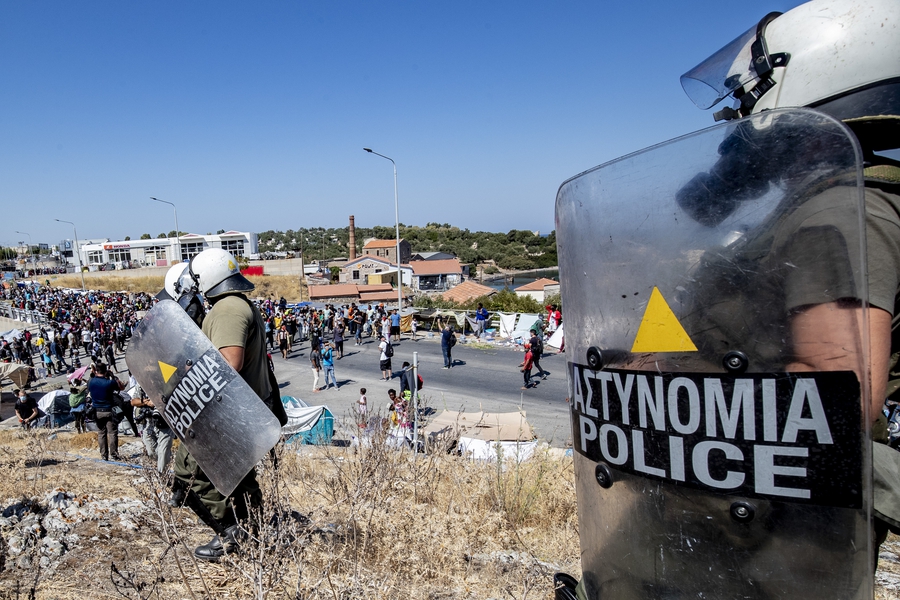 From 3rd January 2021, Greece once again tightened the coronavirus restrictions that were previously eased for most of December 2020. The new, tightened measures were in effect until 11th January 2020. During this time, all non-essential businesses were closed and Greeks could leave their homes only after sending an SMS to a government hotline number that included their reason for movement. Government spokesman Stelios Petsas said in a televised statement that the measures were expected to help with the reopening of schools on 11th January 2021.

Despite the strict lockdown measures in place since early November 2020, Greece’s ICU units face immense pressure because of the number of patients who needed treatment. Some ICU units are currently operating at near capacity.

On 17th November 2020, hundreds of people gathered in Athens to remember the 1973 student uprising. Every year on this day, thousands gather in front of the Athens Polytechnic to remember the protesters who died there. They march to the US Embassy, as the United States supported the military junta ruling Greece between 1967 and 1974. The marches often turn violent with clashes between protesters and the riot police (see Monitor updates on earlier protests here and here).

In order to prevent this year’s march from happening, the government tightened the restrictions on gatherings to a maximum of three people between 15th and 18th November 2020 citing the strain on the healthcare system.

Opposition parties said that banning gatherings of four or more people was unconstitutional and defied the ban. However, the Council of State, the highest administrative court of Greece, ruled in favour of the government’s decision.

"The decision of the Greek authorities to issue a blanket ban on all public assemblies across the country is disproportionate and violates Greece’s obligations under international human rights law. Restrictions to the right of peaceful assembly to curb the pandemic are permissible but must meet the principles of strict necessity and proportionality. Governments do not have carte blanche to restrict human rights, even during these difficult times.”

Nonetheless, about 250 people, according to the Associated Press, wearing masks and keeping social distancing protested in the morning in front of the US Embassy. Subsequently, about 1,500 people gathered in central Athens. This latter gathering was dissolved by the police who eventually used tear gas and a water cannon. Dozens were detained.

On the International Day of the Elimination of Violence Against Women which is held every year on 25th November, women protested in Syntagma Square, in Athens. Five activists were carrying a banner outside the parliament saying that the lockdown would not protect women from the pandemic of violence.

Nine women were arrested and charged with breaking public health rules and they were given a fine of 300 Euros each. According to Amnesty International, this was a violation of the activists' freedom of expression and assembly, given the fact that they were wearing masks and observing physical distancing rules.

“Arresting, fining and charging peaceful activists simply for staging symbolic actions against gender-based violence is an assault on their rights to freedom of expression and peaceful assembly. The Greek authorities must drop all charges against them and ensure that people can safely raise their opinions even during this public health emergency. Activists must not be penalized for trying to raise awareness about gender-based violence, let alone at a time when women and girls face increased risks due to lockdowns and other restrictions around the world,”- Nils Muižnieks, Amnesty International’s Regional Director for Europe.

Furthermore, according to the NGO, the women repeatedly asked why they were taken into custody and transferred to the Syntagma police station but their questions were not answered until late in the evening.

On 6th December 2020, about 100 people were arrested in Athens for attending a march in honour of the 12th anniversary of the death of 15-year-old Alexandros Grigoropoulos. The teenager was shot dead by police in 2008 in the Exarchia district, in Athens. According to the authorities the people who gathered on Sunday were violating the ban on gatherings imposed by the government. A video documented police using excessive force, which included the use of tear gas and physical violence by kicking a protester in the face.

Activists have warned about the rise in police brutality during protests in Greece. Amnesty International Greece launched a campaign, addressed to the Greek Minister of Civil Protection, Michalis Chrysochoidis, and the Greek Minister of Justice, Costas Tsiaras, calling for the end to police violence and impunity.

“These incidents are not "isolated", as the Greek authorities claim, but rather systematic, and reflect a continuing culture of impunity. Meanwhile, victims of police ill-treatment and / or their families complain of lengthy criminal proceedings and ineffective criminal and disciplinary investigations into their cases.”

“We... believe that the unprofessional behaviour of the police officers, the arbitrary manner of their questioning, their unnecessary use of strip-search, the violation of COVID-19 precautions, and their repeated obfuscation of the charges against the crew members, amount to an unacceptable act of intimidation against a journalistic documentary crew.”

#Greece: A German media team including journalists Larissa Rausch & Manolo Ty suffered a 7-hour detention & mistreatment by the police just because they were producing a documentary on #migration on #Samos. @RSF_inter calls on the authorities to stop the intimidation immediately! pic.twitter.com/hx0GfkThVt

“The unjustified detention of Antonis Rigopoulos was an unacceptable attempt to harass reporters covering the protests and a clear attack on press freedom. Sadly, this isn’t an isolated incident. In recent weeks, we’ve seen police in Greece use arbitrary detentions and threats of fines and charges to intimidate journalists covering sensitive topics,”- IPI Deputy Director Scott Griffen.

On 13th December 2020, Elena Akrita, a well-known journalist and columnist at Greek daily newspaper Ta Nea, announced that she was resigning due to a recent column being ‘censored’. Greek media have reported that the columnist was pushed out due to her critical commentary on Prime Minister Kyriakos Mitsotakis.

In a separate case, on 16th December 2020, Greek journalist Dimitra Kroustalli, who works for newspaper To Vima, announced that she was forced to resign due to “strangling pressure” from the cabinet of the Greek Prime Minister, Kyriakos Mitsotakis. She stated that such pressure is believed to be linked to the publication of her work on government’s response in tracking and monitoring COVID-19 cases, which resulted in “permanent gaps and inaccuracies” in data collection. The journalist said: “This created internal tension and put me in a dilemma: personal and professional humiliation or resignation.” The government has denied any interference, stating that it “does not interfere in the media or in the work of journalists.”

Journalists and other media staff staged a strike from 8th December 2020 over proposed changes to Greece’s press laws. Both state-run and private media halted all broadcasts except for COVID-19 developments. The proposed law, which aims to reduce the requirement of 400 employees at television channels to 280, includes more flexible articles against journalists regarding their employment contracts.

#Greece 🇬🇷 Greek TV stations' strike which started on 8 December continues today to protest against changes in labor relations leading to job cuts and mass layoffs. We join their struggle and express our solidarity. #StrongerTogether #solidarity💪https://t.co/BSKsoWHajD

As previously reported, the Greek government was accused of not being transparent in how it allocated public money to the media that are closer to the government. Following the accusation, the government released the Petsa list. In early December, the European Commissioner for Values and Transparency, Vera Jourova, likened the situation of the funding of public media in Greece to what has been happening to the media environment in Hungary and Poland.