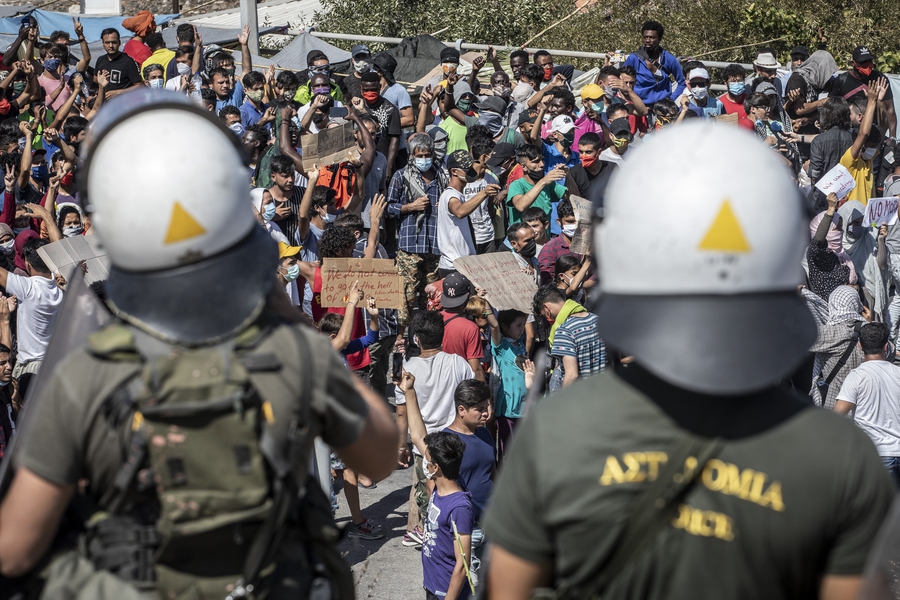 In the past few months the refugee crisis has remained one of the biggest political and social challenges facing Greece. Refugee camps are still unbearably overcrowded, the hygiene conditions are dangerously poor and the future of the people living in those camps is uncertain. As reported earlier on CIVICUS Monitor, the pandemic has only worsened the situation of asylum seekers trying to move forward with their lives.

As the number of cases was relatively low during the summer, restrictions were temporarily lifted. However, on 21st September 2020, Greece reported the highest number of coronavirus cases since the end of lockdown in May 2020. Following this, the government announced new measures to prevent the spread of the virus and is considering further restrictions. By the end of September 2020, several refugee camps have been placed on lockdown following outbreaks.

While such lockdowns and the related restrictions may well be justified due to the public health emergency, it is reported that the Greek government wants to put in place further restrictions, by pressing for permanently closed centres. Rights groups argue that it is unjustified to permanently restrict the freedom of movement of asylum-seekers.

On 12th September 2020, clashes between riot police and asylum seekers occurred on Greek Island Lesbos. On 9th September 2020, the island’s infamous Moria camp housing more than twelve thousand refugees, five times more than its capacity, burned down. People in the camps were forced to find alternative and unsuitable places to sleep such as on roadsides, doorsteps and even in the local cemetery. This sparked tensions between the locals, the refugees and the police. Spontaneous protests arose, with at times thousands of refugees demanding that they should be allowed to leave the island. Protests were mostly peaceful, with many children and women in attendance.

However, a fire broke out next to a police blockade near the new temporary camp that was being built, and at some point some protesters started throwing stones at the police. The police responded by firing teargas and stun grenades at the protesters. At least three people were arrested.

Children are crying and people are shocked after tear gas by Greek army. Thousands of refugees are sleeping in the street since four days. pic.twitter.com/E0MiF2VTYS

Other protests which took place during the reporting period include:

As previously reported on the CIVICUS Monitor, from March 2020, the Greek government was heavily criticised for its lack of transparency in the allocation of its anti-COVID-19 promotional funds.

The situation has not changed in recent months. The newest allegations involved the financing of websites that were started in May 2020, that did not exist prior to this and that belong to the Greek community in the US or that were last updated in April 2020.

Following mounting pressure, the government released a list of all the media that received the funding (the so-called “Petsa list”). The list showed that critical media received less than one percent of the total spend and neutral media received far less than pro-government outlets.

According to the International Press Institute, the COVID-19 crisis exacerbated the partisanship of the media sphere in Greece. The majority of the media did not scrutinise and report on the government’s (mis)management of the crisis.

On 25th September 2020 government spokesperson Stelios Petsas announced a new two million euro government sponsored COVID-19 media campaign to be launched in October 2020. In light of what was revealed by the first ‘Petsa list’, this new campaign might lead to the same results as the first one and worsen the situation of critical, independent Greek media even further.

Journalists reporting on the migrant crisis continue to face attacks and restrictions. As documented by Reporters Without Borders (RSF), Iason Athanasiadis, a correspondent for the German daily Die Welt, was attacked by police as he was leaving a refugee settlement in Lesbos on 11th September 2020. Athanasiadis was detained for an hour. Other journalists have also faced restrictions, such as being barred from camps, which prevent them from reporting on the events unfolding with the migrant crisis.

Access still denied to people on the streets by the press. Police told me it was orders from the chief. What credible reason are press still denied access when they have been allowed the past days? @MediaEu @RSF_en https://t.co/Onc9Xhlwg9

“The strategy of the Greek authorities is clear: discourage journalists from reporting on how they manage the refugee crisis on Lesbos, even at the cost of police violence. They not only violate press freedom, but also deny the right to information to the local and international public as it discusses helping Greece. The authorities must immediately allow journalists to access the refugee sites,” - Pavol Szalai, Head of RSF’s EU/Balkans Desk.

Following the uncertain working conditions of journalists in Lesbos, an open letter which condemned such restrictions was sent to Greek authorities by seven press freedom organisations, including RSF and the European Centre for Press and Media Freedom (ECPMF).

“We consider that, given the refugees’ circumstances currently on the island of Lesbos alongside the ongoing refugee crisis and the European community’s response to it, there is a heightened public interest in receiving information on the matter and very little scope for restricting journalists’ access.”